Celebrity Gossip
3 weeks ago
by criss
0

The Duke and Duchess of Sussex have arrived in New York City for their first set of public engagements since their daughter Lili was born in June.

.@NYCMayor and @NYCFirstLady join @GovKathyHochul to greet Prince Harry and Meghan, the Duke and Duchess of Sussex, at @OneWorldNYC. pic.twitter.com/s3Dy3RFtFh

Meghan Markle and Prince Harry’s first stop was the One World Observatory on Thursday, where they met with New York Governor Kathy Hochul and Mayor Bill de Blasio and posed for photos. 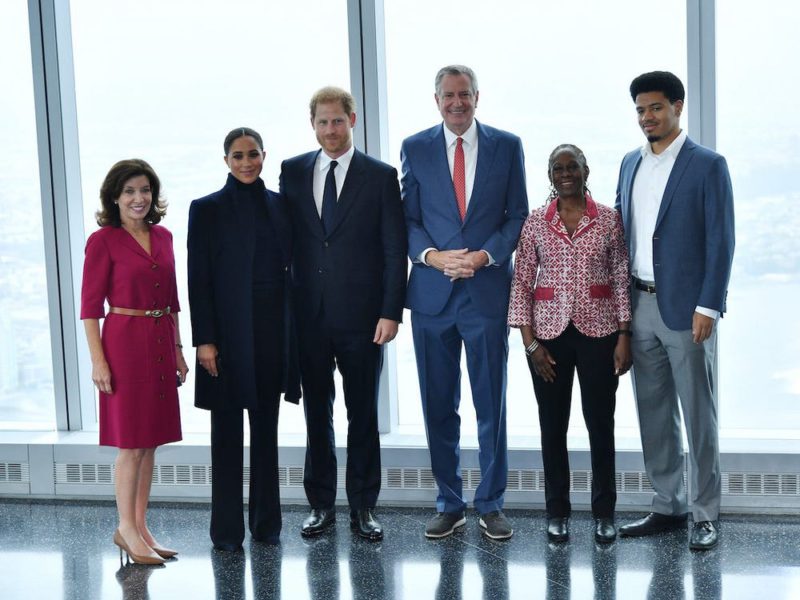 It marks the couple’s first joint visit to the city. Markle previously visited without Harry for her baby shower ahead of their son Archie Harrison’s birth in 2019.

“It’s wonderful to be back,” Markle told a reporter on Thursday.

“It’s wonderful to be back.”

— Meghan Markle alongside Prince Harry in NYC during the couple’s first joint public outing since the birth of daughter, Lilibet, in June. They join Gov. Kathy Hochul and Mayor Bill de Blasio at One World Trade Center. pic.twitter.com/WQBaAhb7vL

Insider’s Chief Media Correspondent Claire Atkinson covered the couple’s exit from the building and shared a video on Twitter.

Read Also: TWO Royal Babies On The Way? A New Report Says Both Kate And Meghan Are Pregnant With Baby Girls

And here’s the video… pic.twitter.com/sE7ePqvgmA

In the video, a woman can be heard saying: “Meghan, Harry! You look so beautiful, girl. I love you both. I love you too, Harry,” to which Markle smiled and waved in response.

Atkinson told Insider that the couple’s visit had been kept low-key.

“A lot of my journalist friends who cover the royals didn’t even know they would be there,” she said.

Despite this, the crowd started to pick up with photographers and royal fans alike. Atkinson said she was surprised by the number of teenagers in the crowd.

Well look who I just ran into on the way to work. They came out of the Condé Nast building and headed over to the September 11 Memorial. #PrinceHarry #Meghanmarkle. pic.twitter.com/ghjCgWTBor

Harry and Markle coordinated in black outfits for the visit and carried face masks as they waved at the crowd. Harry wore a suit and tie, while Markle wore a chic, knee-length coat — which Fashionista reports is from Emporio Armani and retails for $1,200 — over a high-neck top and pants.

She accessorized with $650 Aquazzurra suede pumps, according to Fashionista, and £12,000, or $16,487, Cartier earrings, according to the Daily Mail. She wore her hair pulled back in a bun.

They intend to use their time on stage “to call for the European Union and G7 to work together to immediately donate at least one billion COVID-19 vaccine doses to those places in the world still struggling most with the pandemic,” according to Vanity Fair.

Michelle Obama Just Revealed The Most Heartbreaking News About Her Daughters--So Sad!

Is Ivanka secretly behind the new Melania tell-all book? Ex-adviser shares why she thinks so