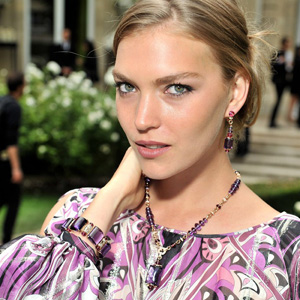 Bulgari took the unusual step of showcasing its high-jewelry collection on a catwalk at a star-studded event held during Paris Couture Week.

Bulgari took the unusual step of showcasing its high-jewelry collection on a catwalk at a star-studded event held during Paris Couture Week.

Models paraded in creations ranging from the brightly colored pieces for which Bulgari is famous such as a yellow gold necklace set with stones including tourmalines, amethysts and topazes to diamond jewelry including a fully pavéd Serpenti bracelet.

“I would never imagine having just new jewels in a display box. It would be unfair, I think, to feminine beauty and to the craftsmen who made the jewelry,” Bulgari chief executive officer Jean-Christophe Babin said after the show. He noted that diamond jewelry makes up about 40 percent of the new collection, the largest the Roman firm has ever produced. “It’s kind of a turning point. In the past, we had virtually only colored stones, combining precious and semiprecious, whereas this year clearly we wanted to make also a statement that as a master of colored gemstones, we are first and foremost a master of gems, starting with diamonds,” he explained. Bruni-Sarkozy is fronting her second ad campaign for the brand, which began rolling out in June. “We wanted to make lively campaigns and to bring high jewelry alive for everyday not women like statues, but women who eat, sleep, are active, busy, sometimes tired, smiling, of course, but essentially spirited, and I think that has become clearer with the second campaign,” Bruni-Sarkozy said. France’s former first lady is combining her promotional duties with her songwriting career. “I am truly Franco-Italian. My music to me is France, and Bulgari represents Italy. It’s my roots, my childhood, and many things that take me back to a dream of my childhood,” she mused. Bana, the face of Bulgari’s Man Extreme fragrance, stars opposite Édgar Ramírez and Olivia Munn in the recently released “Deliver Us from Evil,” based on the memoirs of a former NYPD sergeant who moonlights as a demonologist. “I haven’t had anything crazy happen to me personally, but I came across a lot of very interesting things whilst researching the film that I guess caused my mind to be open a little bit more, for sure,” said the Australian actor.