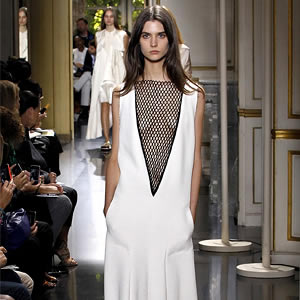 At Celine, Phoebe Philo will offer more of the pared-down elegant femininity that has garnered such a widespread following over the past few years, while Bill Gaytten – who remains at the helm of John Galliano – is expected to develop his toned-down approach to the label’s signature romantic drama.

Next, to Givenchy – at which Riccardo Tisci will play out his dark, tough take on femininity. In December last year, the label announced that it was taking a break from its much-loved couture line to focus on ready-to-wear, so the pressure is on to see how this translates on the catwalk.

Also to look forward to today is Chloe, a brand that has built a name for its accessible girlishness, and couturier Maxime Simoens – who is making his ready-to-wear debut, having recently been given investment from LVMH. – Vogue