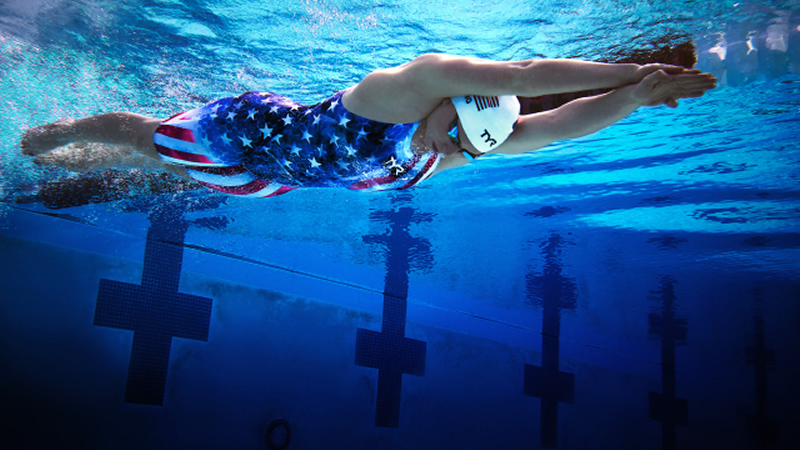 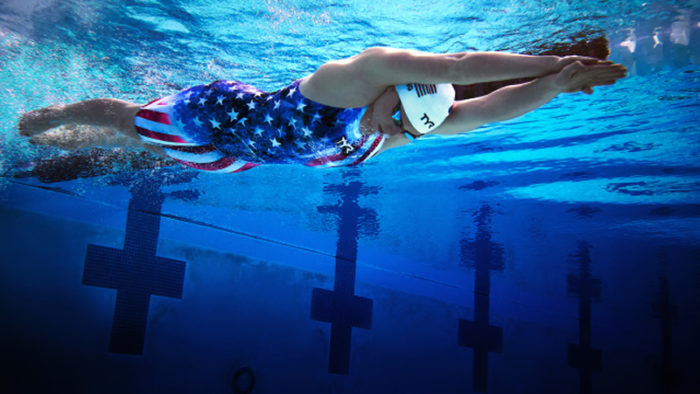 Brands such as Speedo, TYR, Nike, and Roka are seeing interest and sales increase as swimmers venture back to the water.

When Katie Ledecky stepped onto the blocks at the U.S. Olympic Trials in her TYR red-white-and-blue suit earlier this month, it helped lift the spirits of amateur swimmers who had been locked out of their pools and training routines for months because of the pandemic.

Instead of logging laps, dedicated performance swimmers last year bought dryland training bands and hit lakes and oceans when possible to get their swimming fix.

But now that the pandemic is waning, the weather is warm and pools and beaches have reopened, the performance swimwear category is reaping the benefits. Add to that the anticipation around the upcoming Olympic Games and the situation look even brighter.

Brian Basye, vice president of the team and specialty sales for SpeedoUSA, just returned from the Olympic Trials in Omaha and said that while this year’s event was “very different” than in the past because of COVID-19, “they were still glamorous.”

“Last year was a sobering year for most competitive swimmers,” he continued. “From March through September, there was almost no access to pools so the competition side was impacted.”

For those hoping to qualify for the Olympics, they did whatever they could to stay in shape and keep their spirits up. But in the fourth quarter of last year, he said, things changed. “We saw a bit of an increase [in sales] as high school and college teams started to swim again.” And that increase has continued into this year.

These avid swimmers, who had no reason to purchase new suits last year, went out and bought two or three as they got back into the water, he said, adding: “Since February, there’s been a very steady increase.” Among the most popular Speedo models among elite swimmers are the Pure Intent and Valor suits, along with the Caeleb Dressel collection that includes performance suits for men and women as well as lifestyle pieces, such as hoodies and backpacks.

And that’s expected to accelerate when the Olympics start next month. “The number of swimmers in the water is increasing and that’s very beneficial,” he said.

In a normal year, participation in USA Swimming increases 9 percent, but in an Olympic year, that number rises to 12 percent, he said. “Swimming is the number-one watched sport at the Olympics.”

And seeing the likes of Ledecky, Caeleb Dressel, Regan Smith and Simone Manuel excel in the sport will only help to “energize and motivate people to get in the water. That’s really good for the sport and for Speedo,” Basye contended.

Matt DiLorenzo, chief executive officer of TYR Sport, also cited “a steady climb back to the pre-pandemic swim marketplace. We are cautiously optimistic that sales will continue to rise with the peak summer season, as well as with the excitement around the 2021 Tokyo Games.”

DiLorenzo said although pools were closed for so many months last year, TYR took the time to “take a good look at our business strategy going forward and evaluate how we could serve our customers with a variety of products 12 out of 12 months a year.

The innovation we have seen in new product categories such as eyewear, headwear, SunDefense, and apparel has us excited about the future.”

He said the core competitive swimmer “had to get creative when finding open water or private pools to train in during the pandemic. We saw many athletes gravitate toward our TYR Hurricane Wetsuit line and Neoprene items to keep warm in the cold water since pools were closed.

Because of smaller private pool sizes, we also saw a need for resistance training, so items like the TYR Aquatic Resistance Belt that allows swimmers to swim in one place rather than swimming laps, became an essential training tool.”

The fit and fabric of these suits allow competitive swimmers to be as compressed and fast as possible.”

He pointed to TYR swimmer Michael Andrew, who broke an American record twice for the 100-meter breaststroke in the TYR Avictor at the Olympic Trials, as adding further fuel to its momentum.

Looking ahead to the rest of the year, DiLorenzo said heading into the Olympics where many of the top contenders will be wearing the brand’s suits, “we’ve been given a window of opportunity to position ourselves as the market leader in performance swimwear.

That being said, we see a true synergy between Olympians, weightlifting, CrossFit, adventure, triathlons, surf and skate.

With our new product categories (eyewear, headwear, apparel) launching next spring, TYR will be popping up at other places besides the pool, but will always remain true to our high-performance product DNA.”

Oscar Feldenkreis, CEO of Perry Ellis, which holds the license for Nike swimwear, also said the brand is “seeing a lot of momentum in the market.”

While the pandemic spurred demand for lifestyle products, the performance end of the business has been regaining its footing now that pools have opened again, he said.

“In June, when the world began opening up, we couldn’t keep swim on the shelves,” he said. He said sales levels are above those of 2019 and the average selling price has also increased.

Nike’s Icon collection, which is geared to a younger consumer, has been among the bestsellers at retailers such as Finish Line and Dick’s Sporting Goods, Feldenkreis said. In men’s, five- and seven-inch lengths are popular and the “younger, edgier” styles are selling with both genders.

“For spring 2022, we’ll introduce the Nike Flow Hybrid Short,” he said, which has no liner and a fixed waist along with quick-dry technology, which he expects to be a strong seller, along with long- and short-sleeve Hydro T-shirts, hoodies, cover-ups for men and other apparel pieces to wear once the swimming is done. Goggles and other complementary products are also gaining in popularity. All in all, the market is on a roll, Feldenkreis said. “This will probably be the best year we’ve had in the swim.”

Roka, too, has benefited from the increase in products for use in and around the water. The Texas-based brand was founded in 2013 by Rob Canales and Kurt Spenser, who raced on the swim team at Stanford University.

After graduation, they were lured to triathlon and created a wetsuit that revolutionized the sport by offering a more streamlined body position.

Since then, Roka has expanded into triathlon race apparel, Neoprene buoyancy shorts, goggles, and other products for triathletes and other athletes. Its recent entry into the performance eyewear space has been a success, with year-over-year sales more than doubling.

“While the mass participation sports market was shut down, we actually grew substantially on the sunglass and prescription eyewear side,” Canales said.

Spenser said with so much of the company’s business focused on the triathlete community, it was “extremely scary when triathlons went into hibernation last year.” But the brand has weathered the storm and is seeing a definite increase in interest again.

“There is some bottled-up demand,” Spenser said, among seasoned athletes who are eager to return to competition as well as newcomers who looked at the pandemic as an opportunity to “integrate sports into their lives more.”

And while others are still tentative about returning to racing, those who are ready are spurring sales of race-day products such as triathlon swimming outfits and wetsuits.

The upcoming Olympics are also expected to help. With swimming, running and triathlon on a world stage, Spenser expects a further “uptick in people trying these sports out.”

Roka will be visible during the Games since it created a highly technical race kit for the triathletes to wear in Tokyo that was designed with thermoregulation properties to help them navigate the heat expected during the race.

Although these suits won’t be available to the general public, Spenser said Roka will apply some of the technology used in these kits to its commercial product over the next year.

“We’re focused on creating products that athletes need and we’re excited to see racing and mass participation sports return,” Spenser said. “We thrive when people get outside and feel comfortable again.”

Prince William is not ready for peace with Meghan Markle