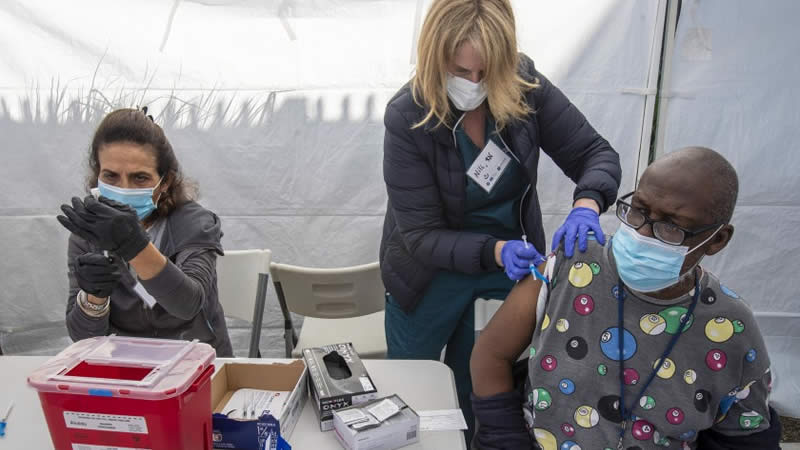 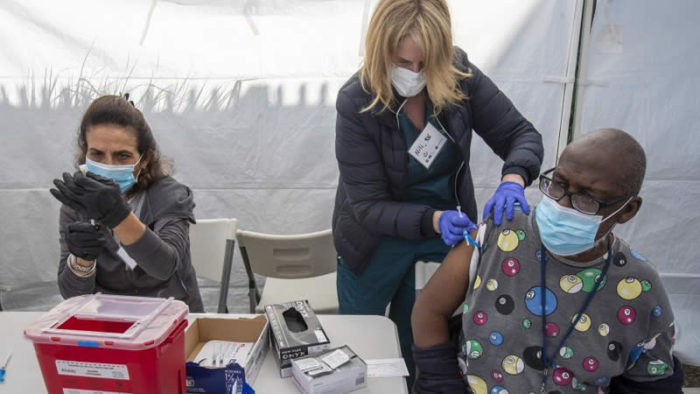 “Our only constraint is manufactured supply,” said California Governor Gavin Newsom on Thursday. “With the expectation that more supply will be made available,” he continued, “that expectation has set up a framework where today we are announcing that we are modifying, in a stair-stepped manner, our eligibility for doses here in the state.”

The governor’s plans, of course, depend on what he predicted will be a sharp rise in the availability of doses. While Newsom seems confident in that, Los Angeles health officials seem less so. They pledged to align with the state’s schedule if there are enough doses.

“With the State’s announcement today, it means everyone age 16 and over will be eligible for the vaccine in mid-April,” said a carefully-qualified statement on Thursday from the L.A. County Public Health Department. “Expanding vaccine eligibility over the next couple of weeks will make it easier for more people to get vaccinated provided the County receives more doses.” Emphasis on those final words is ours.

The last time the governor announced a major expansion of vaccine eligibility was on March 15, when he directed that Covid-19 vaccine appointments be made available to people aged 16-65 years old with an underlying health condition. That group comprises 4.4 million Californians.

The timing of that expansion was problematic. It coincided directly with what Marta Green — a state official tapped to oversee the third-party vaccine administrator — called a “really challenging” moment.

“When we look at the concrete information we have,” said Green, “that 3-week projection from the CDC, I hate to tell you this, it is entirely flat. There is not a single [additional] dose. Not one.”

So the governor vastly expanded the pool of vaccine-eligible Californians at the very moment the state was sure to have no additional supply. County health officials across the state expressed concerns — not for the first time.

Sacramento County, Kaiser Permanente in Northern California and, three weeks ago, Sutter Health have according to the Sacramento Bee “at varying points within the vaccine rollout expressed concerns that their supply was either unacceptably low or had dropped significantly without warning or explanation from the state.”

What’s more, while president Biden promised local health officials a three-week window on incoming vaccine supplies Newsom had, as of last week, still not provided L.A. officials with projections more than one week out.

Why are three-week projections important? Vaccination sites need to be able to have people scheduled for a number of appointments that match the number of doses coming in. Ideally, that’s a process that happens smoothly weeks ahead of time. When it doesn’t you get examples like Dodger Stadium, which can deliver upwards of 7,000 vaccinations a day, but shut down last month because deliveries didn’t match appointments. Thus the nation’s largest vaccination site had to close its gates for two days.

“This week we only received 16,000 new doses,” said Mayor Garcetti at the time. “That’s about the number of new doses we give out every single day,” he said. “That is down 90,000 from the week before. That is unacceptable.”

This week has likewise been difficult. Because of vaccine scarcity and because of the scarcity of the certainty that three-week window provides, L.A. County has administered only second doses this week, the logic there being that it is better to complete vaccinations already begun that begin those it is uncertain to be able to complete.

President Biden has promised there will be enough vaccine to open eligibility for everyone by May 1. Forty states are reportedly on track to do so. Newsom’s ambition for the largest state in the U.S. is to approach that goal weeks before May 1. That may well be possible. However, the issue local health officials have repeatedly encountered is not at the federal, but at the state level. Specifically, those issues have centered around promises made and promises kept — and around bottlenecks of information and vaccine supply in Sacramento.

Asked in late February about the lack of transparency the governor said, “Next week the counties will start getting their three-week window, specifically March 1st.” That March date was when the state’s no-bid deal with Blue Shield to allocate vaccination doses and centralize appointments was supposed to take effect. Part of the company’s mission was to create an algorithm that would parse allocations across the state. The date came and went without Newsom’s promise being fulfilled. He then said March 15. That date came and went, as well.

Now, local health departments across the state have rebelled against ceding authority to Blue Shield. It began with Santa Clara and then spread.

So it’s understandable that today’s statement from L.A. officials is more carefully qualified than the sunnier statement from Newsom. The county’s public health department called out scarce supply repeatedly on Thursday.

“During these times of scares [sic] supply, our priority is to ensure that residents and workers in hard hit communities are each able to get vaccinated,” said L.A. officials before putting a finer point on their needs. “As eligibility expands, we will re-double efforts to increase accessibility and availability of vaccine in communities with the highest risk and lower rate of vaccinations.”

The statement continued, “Public Health is happy to see eligibility for the Covid-19 vaccine expanded by the State…The County hopes the expansion of eligibility carries with it increased doses of vaccine coming into L.A. County. L.A. County vaccination sites continue to operate below their capacity and have the ability to vaccinate around twice the number of residents each week than our current allocation allows.”