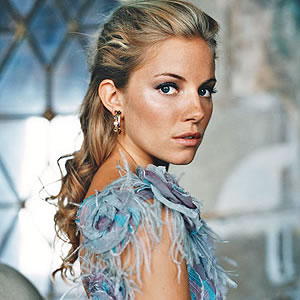 Sienna Miller has had a tumultuous year. Renowned for attracting mountainous tabloid column inches during her volatile (and very public) relationship with Brit actor Jude Law.

Sienna Miller has had a tumultuous year. Renowned for attracting mountainous tabloid column inches during her volatile (and very public) relationship with Brit actor Jude Law, she is now enjoying being a hot pick amongst Hollywood casting agents. Here she talks about the pressures of the press, and what it was like working with Aussie heartthrob Heath Ledger in new film Casanova Are you surviving okay with all the tabloid attention you’ve been getting recently?
I wish it wasn’t in my life to the degree that it is, but I’m not going to say anything about this anymore. Every interview I’ve done, if you get me on that subject, you won’t get me off it! I’m not the only person who has to deal with this, and I’m not the only person to resent it. I wish that it wasn’t so prevalent in my life but I accept it. It’s been a pretty tumultuous year, and hopefully it will die down a bit.

You dyed your hair brunette to play Francesca in Casanova, and generally look pretty different, did you enjoy the transformation?
She’s was a very strong, intelligent early feminist. It wasn’t about being glamorous; I wanted to look very different from how I look normally. She wasn’t out there to try to get a man, so I didn’t want anything about her to be ostentatious. So we paled me up, but I was desperate for a little bit of blusher!

How did you cope with the corsets?
I was so excited by wearing a corset – especially what it does for you in terms of getting into character. It makes you feel very repressed, because you can hardly breathe and your organs are squashed to within an inch of your life. It squeezes you, and gives you darts in your skin. I also had a big bum bustle, so I couldn’t even lie down. The novelty wore off, and I wanted to burn it by the end!

Are you attracted to the Casanova type, and do you think men like him still exist today?
I like being loved, and I like giving love, it doesn’t repel me. But I think there is something attractive about all different types. I think we have male and female Casanovas nowadays. But people misinterpret what he was, and see him as this Alfie character who sleeps with women and just discards them. Casanova loved women, and worshipped women, and made them feel loved and worshipped. So it was more an exchange of love, than a conquest.

How would you compare the women you play in Alfie and Casanova? The difference is vast. Nikki in Alfie was this troubled bipolar nut bag and Francesca is this early feminist, strong, independent cross-dressing, swashbuckling heroine. I’m sure someone like her must have existed back then – the Venice years were Casanova’s most debauched, crazy years.

What was Heath Ledger like as a leading man?
He was like a big brother, really laid-back. He called me ‘big bum’ because of my big bustle. I think a lot of actors would have come into that role – playing the greatest lover of all time – with a huge ego. Heath didn’t pout or pose, or have any ego whatsoever, which is so hard to do when you’re playing a man like that. We didn’t stop laughing for five months; we had a really good time.

What about the future for you?
I’m not sure. I’m quite spontaneous, so I don’t like to plan too much in the future. But I’d like to do a really good comedy. I know Casanova is a comedy, but one where I’m the really funny one, not the depressed one!

You are due to start filming Factory Girl, playing Andy Warhol’s muse, Edie Sedgwick. What do you think about the idea of everyone having their 15 minutes of fame?

Do you think your instant fame right now will help this film?
I can’t look at it from that point of view, I’m very proud of this film. So anything to help it, I suppose is…. I’m not going to say that!