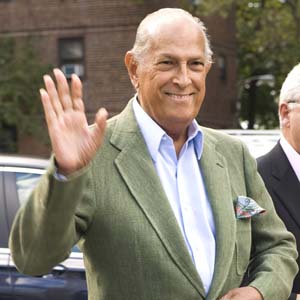 Oscar de la Renta, the Dominican Fashion designer who shaped the wardrobe of socialites, first ladies and Hollywood stars for more than four decades, has died.

Oscar de la Renta, fashion designer and dresser of the stars, has died aged 82 after battling cancer, family have confirmed.

Known for his sumptuous evening gowns and red carpet fashion, de la Renta found fame dressing Jackie Kennedy in the 1960s and his designs have since been worn by Princess Diana, Oprah Winfrey, Hilary Clinton and generations of Hollywood actors.

Born in 1932 to a wealthy family in the Dominican Republic, Óscar Arístides de la Renta Fiallo learned his trade as an apprentice of Spanish designer Cristobal Balenciaga before working under Lanvin and Balmain in Paris. In 1965, he launched his own ready-to-wear label in New York.

De la Renta’s final catwalk collection, which was to be his last before British designer Peter Copping took the helm of the fashion house, drew inspiration from florals and the joys of spring. The collection showed at New York fashion week in September. He also designed Amal Alamuddin’s wedding dress for her recent marriage to George Clooney. If his style wasn’t considered groundbreaking, de la Renta had a knack of dressing the most influential women of every decade, from royals and politicians to socialites and pop stars. When, in 2012, de la Renta wrote an open letter to a journalist who had criticised his new collection, Lady Gaga tweeted her support: “Bravo Oscar. Only you would be so chic as to purchase an entire page in WWD, making statements like a good fashion citizen.” That same year, he showed himself a man of the modern world by debuting his new wedding dress collection on Pinterest.

“I want to make clothes that people will wear, not styles that will make a big splash on the runway,” the designer said. “Fashion is about dressing according to what’s fashionable. Style is more about being yourself.”

De la Renta was married to Francois Langlade, editor of French Vogue, from 1967 to her death in 1983. His second wife, philanthropist Annette Reed, survives him.