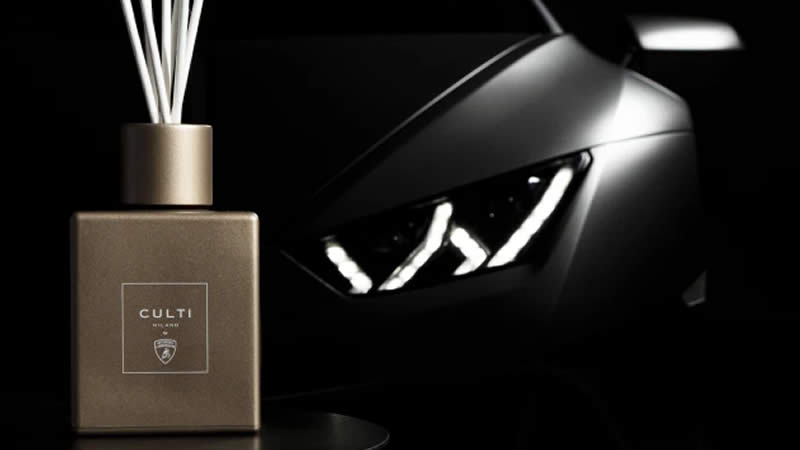 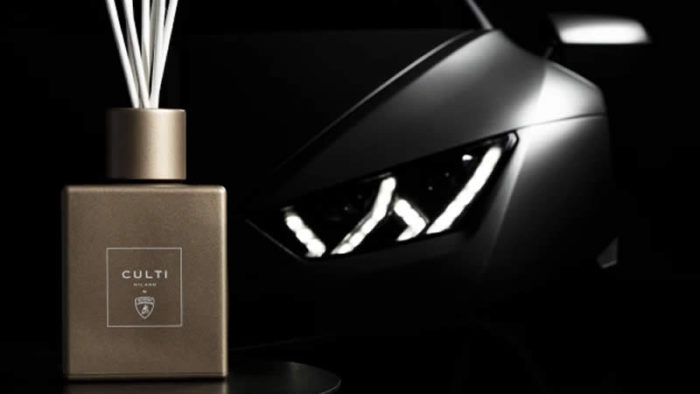 The home fragrance specialist’s CEO Pierpaolo Manes discussed the collaboration and mapped out the future strategies for the brand and its sister firms Bakel and Scent Company.

Luxury sports car lovers may instantly recognize a Lamborghini and the sound of its engine — but they will soon learn how it smells, too.

The automotive company has partnered with Italian home fragrance specialist Culti Milano for an olfactory branding project, resulting in the first in a series of ambiance scents.

The square bottle, which has been revisited in a matte bronze shade and emblazoned with both brands’ logos, will be available in three sizes — 500-ml., 1,000-ml. and a 2,700-ml. magnum version, which will retail at 90 euros, 125 euros and 530 euros, respectively. In keeping with Culti Milano’s tradition, a 1,000-ml. refill bottle priced at 70 euros will also be available to purchase at the fragrance brand’s stores and e-commerce as well as at Automobili Lamborghini‘s flagship store in Sant’Agata Bolognese, a town that is a 45-minute drive from Bologna where the luxury car manufacturer is headquartered. A selection of international wholesalers will also carry the line.

“We’re proud of this project and of the fact that a company like Lamborghini, which for history, heritage and also brand awareness is very different from us, has reached out and wanted to team up with us, acknowledging the value of what we have been doing for the past three decades, and especially the last five years,” said Pierpaolo Manes, chief executive officer of Culti Milano’s eponymous parent company, which has been listed on the Italian Stock Exchange’s segment for small and medium-sized companies, Aim Italia, since 2017.

The Intek Group holding has controlled the Culti Milano brand since 2004. The label was founded in 1990 by interior designer Alessandro Agrati, who had the idea of using rattan sticks to diffuse scents, first carried in flacons recalling traditional milk bottles, creating a composition that doubles as a statement design piece. Spray fragrances, scented candles, perfumed sachets for closets, personal fragrances and body care products were added through the years to complete the range.

“The fact that this is not a mere private label initiative for Lamborghini but a Culti x Lamborghini project opens to further developments that this collaboration can have,” continued Manes, hinting that scented sachets for cars “that we already have in our assortment and that in the last few years registered an unexpected, exponential growth in sales” are being considered as an addition to the co-branded offering.

Still, the company does receive regular requests to do private label lines, but Cult Milano often turns them down. However, in addition to the Culti Milano brand, the group’s portfolio in the last few years has expanded to include the Bakel skin care label as well as Scent Company, a business-to-business firm that specializes in olfactory branding and developing ambiance fragrances for retailers, showrooms, hotels and spas.

For Manes, the acquisition of Scent Company was a step toward further establishing the group’s expertise in fragrances and its ability to answer different market needs. Founded by Diego Capponi and Paolo Persico in 2005, Scent Company’s clients not only include a range of key luxury fashion brands and retailers such as Antonia and Sugar, but also car showrooms of the likes of Porsche, Land Rover and BMW as well as prime hospitality players such as the Armani Hotel in Milan and Dubai; Milan’s Four Seasons; The Gritti Palace and Hotel Danieli in Venice; Villa d’Este, and Grand Hotel Tremezzo at the Como Lake, among others. The Culti Milano group acquired a 51 percent stake in Scent Company last year, following an investment of 1.76 million euros. “For us, it was a strategic operation that would have made a lot of sense in a normal context and still did it even during the pandemic, so COVID-19 didn’t stopped us,” said Manes. He sees significant potential for the business especially after a year that hit its performance due to the closure of retailers and hotels.

Overall, the acquisition was one of the elements that contributed to the group’s positive results in 2020, when revenues increased 49.8 percent to 13.5 million euros. Earnings before interest, taxes, depreciation and amortization increased 130 percent to 3.2 million euros.

Acknowledging the complexity of 2020, Manes underscored that “our advantage is that today the company is still a SME so we re-adapted to the different conditions quickly, but our business model across all three brands didn’t change.”

In the first four months of 2021, the group’s revenues grew 44 percent to 5.5 million euros, compared to the same period last year.

Without disclosing financial targets, Manes said the ultimate goal is to scale up the size of the group “in a constant and healthy way, paying back all the investments we did. And I believe we have the potential to do this because we are present in three different categories, with their own margins of growth.”

In particular, last year revenues for the Culti Milano label were up 23 percent to 9.4 million euros. International markets, which account for 85 percent of the brand’s total sales, contributed to the growth, as well as the label’s limited retail presence “which enabled us not to have too many costs weighting on us” during lockdowns. The brand has six stores in Italy, including its historic flagship in central Milan, while its wholesale network counts roughly 3,000 points of sale globally, 300 of which are in the domestic market. Overall the brand is distributed in 60 countries.

Last year, the group also established the Culti Milano Asia Ltd. joint venture to distribute the fragrance brand in Hong Kong and, through the Culti Milano China subsidiary, in China, where two to three monobrand stores are expected to launch by the end of 2021.

“The joint venture not only enabled us to know the market but to leverage this access in a problematic moment like last year,” noted Manes, who underscored the strategic importance of the region. “In terms of distribution, we were already doing well but we tried to look at the market differently…by being directly present, investing and taking risks, which before were all on our distributor and now are on us, since we own 60 percent of the joint venture,” he said, confiding that the exponential growth expected in the coming years will make up for the effort.

As for the U.S., where the brand is also already distributed, the company’s top management is still evaluating the right strategy to expand and approach “a very difficult market for everybody, both big and small companies.”

The same reasoning applies to other regions with potential for Manes. “We just need to figure out if approaching them directly, with partners and with a single brand or all three of them. If today our operation in China is fully focused on the Culti Milano label, in the future we might deal with different situations, where we have to present ourselves with all three brand to have a critic mass and synergies,” he said.

Meanwhile, Culti Milano’s online presence was boosted, implementing a subscription option to serve the brand’s loyal customers while stores and perfumeries were closed. “It was something we were already looking to implement, but the pandemic accelerated the process,” said Manes, who still sounded cautious about online purchases in general.

“For us, to engage new customers just through an e-commerce is extremely complicated because you can’t smell the fragrances, plus you need a series of investments that are surely important but they don’t often translate into real brand awareness and sales,” Manes said.

Conversely, the digital platform proved to be key for the Bakel skin care label. Developed in just two months last year, the online store sustained the sales of the brand during the pandemic and offered key insights on consumers.

“Many shoppers returned for second purchases and that made us understand the great value behind the brand and the high engagement and loyalty of the customer base, which didn’t looked for alternative products online,” Manes said.

The group acquired a 50.01 percent stake in Bakel in 2019, after an investment of 2.5 million euros. Established in Udine, Italy, in 2009, the company is the brainchild of Raffaella Gregoris, a biochemist who previously developed skin care products for private label lines. Realizing that many formulations included unnecessary ingredients in delivering effective, scientifically proven benefits, she launched her own brand of clean beauty to develop products only using essential active ingredients in high concentrations, mainly focused on battling the skin’s aging mechanisms.

Gregoris still retains a central role in the company, being the CEO of the firm and supervising research and development of products, which are focused on technology. For instance, last year the company patented the idea for 3D-printed skin care products, whose industralization is currently being studied.

“I personally strongly believed in this acquisition,” Manes recalled. “The clean beauty industry is so interesting and with such a high potential for growth….Of course the cosmetic market is much bigger compared to the one of home fragrances and there’s more competition. We have to fight but I think we have good weapons to do it.”

In addition to increasing brand awareness, the future strategy for the brand focuses on expanding its distribution network, which is currently mainly concentrated in Italy. Here, the label is available in 200 perfumeries but starting last year it has entered pharmacies, a channel in which it will continue to expand. Yet for Manes internationalization will be the real turning point for the brand.

Therefore, the group’s strategy is to create synergies between Culti Milano and Bakel and optimize their distribution network to ultimately “create a significant mass in Italy and abroad to present ourselves to clients, distributors and partners with a well-rounded package,” said Manes, confirming that no other acquisition is in the pipeline at the moment.