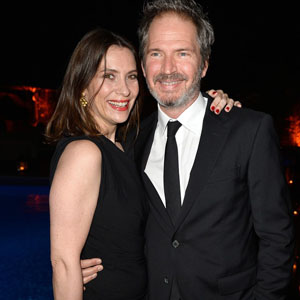 Dior had decked out a section of the Club Costes by Albane on the rooftop of the JW Marriott hotel with a mix of exotic blooms and fake foliage inspired by the hanging garden set of its spring 2014 catwalk show.

High above the hustle and bustle of the Croisette, guests including Harvey Weinstein, Zhang Ziyi, Adèle Exarchopoulos and Paz Vega mingled on Sunday night at a poolside cocktail and dinner hosted by Dior and Elle magazine to celebrate the Cannes Film Festival. Dior had decked out a section of the Club Costes by Albane on the rooftop of the JW Marriott hotel with a mix of exotic blooms and fake foliage inspired by the hanging garden set of its spring 2014 catwalk show. Fresh from the previous night’s screening of “Saint Laurent,” one of 18 films in competition for the coveted Palme d’Or prize, Jérémie Renier said he was globally pleased with critics’ reaction to the movie, the second about Yves Saint Laurent to be released this year.

“I think the film is bound to split opinion a little because it takes a stance. It’s a real film d’auteur, it’s a Bertrand Bonello movie, so he brings it his touch, his vision. I think at least it’s original. It’s not the kind of biopic people are used to seeing,” said the Belgian actor, who stars as Saint Laurent’s partner Pierre Bergé. Renier said he played off his longtime friendship with fellow actor Gaspard Ulliel, who plays the late couturier. “I think our friendship means there is a bond that you can see onscreen and in the way I look at him,” Renier remarked. Aymeline Valade made the jump from modeling to movies to play Saint Laurent muse Betty Catroux, but she didn’t take any acting classes beforehand. “Bertrand wanted me to stay authentic,” Valade explained. “I try to be focused on what I’m doing and not to intellectualize or rationalize everything.” The French model dyed her hair blonde for the part and has kept it that way since. “For the time being, it’s like a fetishist thing, I think, to bring the movie, I don’t know happiness? Luck?” she said. On the subject of hair, John Nollet said he was getting ready to launch a collection of haute couture hair accessories at Colette during Paris Couture Week in July. He revealed that the braid Nicole Kidman sported for the screening of “Grace of Monaco” on the opening night of the festival was actually a feather made of hair. The one-of-a-kind pieces are handmade by couture ateliers including embroiderer Lesage and feather house Lemarié. “I want to launch this trend, especially since we have so little time to prepare actresses for the red carpet, so the more elements are prepared in advance, the more you can achieve a different effect. Otherwise, with only 20 minutes to work with, you always end up with similar looks,” Nollet explained.