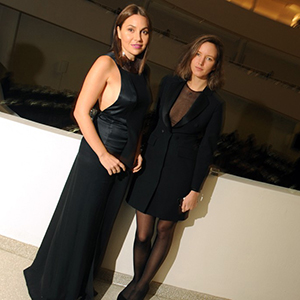 â€œWell, this is awkward,â€ Raf Simons mumbled on Thursday night behind a frozen, picture-ready grin.

“Well, this is awkward,” Raf Simons mumbled on Thursday night behind a frozen, picture-ready grin. The designer wasn’t addressing the distinct air of déjà vu that was inescapable for some of the evening’s guests, many of whom were shuffling into the Guggenheim’s soaring space for the second night in a row for the next round of the Dior-Guggenheim doubleheader — that night’s gala and the previous evening’s pre-party bash. Both fetes were toasting James Turrell, whose much-buzzed-about light installation just closed a few weeks ago at the museum, and Christopher Wool, whose painting exhibition will be on view through Jan. 22.

“I mean, it’s awkward. He’s right there,” Simons cracked, motioning over to Adam Kimmel, standing off to the side, while the designer posed for clicky photographers with Kimmel’s wife Leelee Sobieski, the designer’s arm wrapped snuggly around her waist.

“It was sublime,” said Simons — whose day was spent in back-to-back meetings and a failed attempt to stop by the Balthus exhibition at the Met — of DJ Richie Hawtin (stage name: Plastikman)’s laser-light DJ extravaganza the night before. “I’m his ultimate fan, his number-one fan. And Richie didn’t tell me, but he created music especially for the event. He hasn’t been creating new music for the last six years, and the whole set last night was all new, created especially for us. It was beautiful.”

Hawtin, for one, was unsure how the show would turn out. “Oh, it was so nerve-wracking for me,” he said, as a cacophonous hive of handler barks and camera flashes bustled by. Jessica Biel arrived. “It was definitely challenging,” he chuckled, going on to discuss how the acoustics of the museum’s distinctive swirl structure proved difficult for his performance. “But I think Raf liked it. I was playing a concert a few years ago, and after someone said, ‘Hey, Raf Simons is up there, he’s been just sitting and listening for the past six hours.’ Mostly with well-known people, they come for half an hour and say to you, ‘Oh, I love you.’ But he was there for the whole six-hour set. That’s why when he says he’s my number-one fan, I believe him.”

Soon, guests were goaded to their dinner seats, and while most picked at their plates, Natalie Portman blew in, the starlet swiftly whisked upstairs to greet Simons privately. As the two caught up, Sidney Toledano took to the dais down below, telling the room how he recently had the Guggenheim to himself. “I laid right there, on the floor,” pointing to the center of the room. Toledano’s first visit to the museum had been 38 years earlier, on his first visit to New York. “And I felt like a very young man again.”

The night prior, many of the same Dior devotees — Beracasa, Monroque and Repossi among them — turned up to the label’s hosted preamble party, also at the Guggenheim.

Guests clotted up by the bar, snatching up Champagne and pear elderflower concoctions. Notables zipped up to the VIP section on the second and third levels. Elizabeth Olsen, hand-in-hand with boyfriend Boyd Holbrook, headed up and was asked by security to show her wrist-bracelet to gain entry to the cordoned-off section. Also hand-in-hand, Miles McMillan and Zachary Quinto emerged a few minutes later, the pair barreling towards the bar.

Further down the incline, Olivier Theyskens and Simons were in a lengthy tête-à-tête.

“Oh, you know, personal things,” Theyskens demurred when asked what the two chatted about. “I’ve known Raf for over 16 years, so we have a lot to talk about.”

Jennifer Lawrence Gets a Pixie Haircut