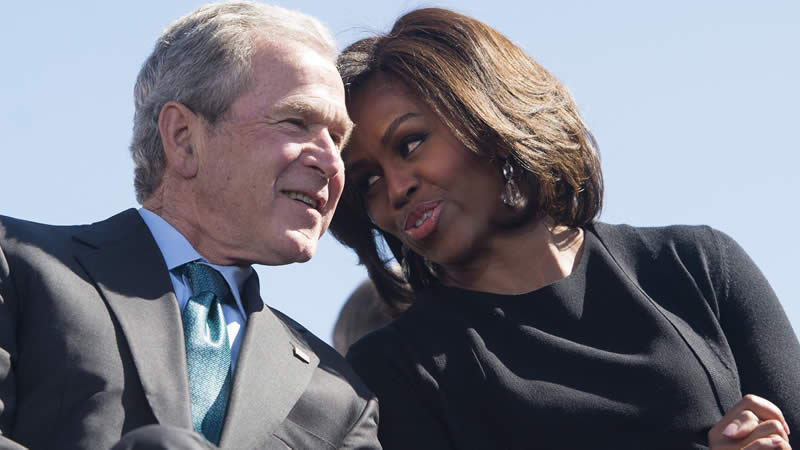 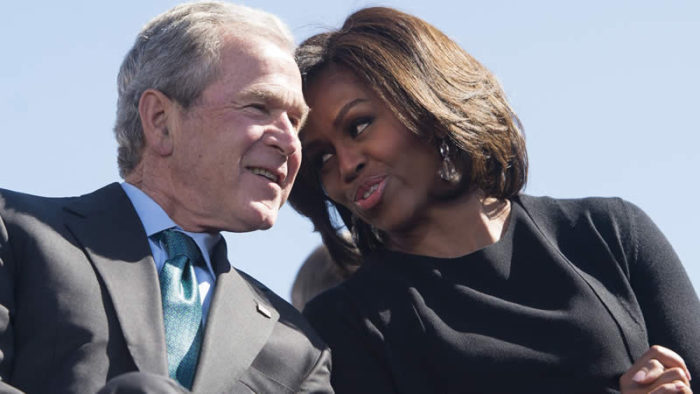 Former president George W. Bush is busy doing a press tour for his new book, Out of Many, One, a collection of stories and oil paintings of America’s immigrants.

The tour has included appearances at Today and Jimmy Kimmel Live. And, surprisingly, one common theme of these appearances were mentions of Michelle Obama, one of Bush’s most unlikely friends.

During a recent interview with Today, former president Bush was asked how he felt about his successors, including Barack Obama, Donald Trump, and Joe Biden. Specifically, Bush was asked whether or not he’d ever been tempted to comment publicly on them.

“Yeah, I guess I have, sure,” Bush responded, per People.

However, when pressed for a specific name, he kept quiet. “Anyone in particular? Nah, I think I’m fine,” he said. Bush then joked, “If I did, Michelle Obama might not be my friend.”

Bush’s friendship with Michelle Obama has been the subject of plenty of speculation since the former president was spotted sharing a piece of candy with her during John McCain’s funeral in 2018.

WATCH: Full speech: "We gather here to mourn the passing of American greatness — the real thing, not cheap rhetoric from men who will never come near the sacrifice he gave so willingly,” or those who lived lives of comfort as he served.https://t.co/kYt9QbmXMu

“I get a little antsy during the long-winded eulogies, and so I start cracking a few jokes,” he said. “And she seems to think they’re funny, so I’m delighted.”

However, the friendship does not necessarily carry over to their spouses. When asked if Laura Bush and Barack Obama had a similar bond, Bush joked, “He doesn’t sit next to her at the funerals.”

During her press tour for Becoming, Michelle Obama also commented on her friendship with Bush – especially the mint-sharing moment caught on camera. “He has the presence of mind and the sense of humor to bring me a mint. And he made it a point to give me that mint right then and there, and that’s the beauty of George Bush,” she said, according to ABC7.

Is Joe Biden a Wanted Criminal in Ukraine?