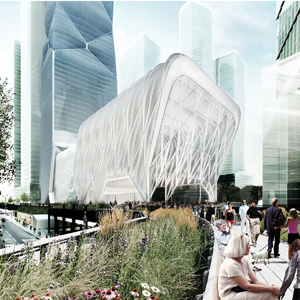 Hudson Yards is pushing to be the next home for fashion week and has Diane von Furstenberg and the Council of Fashion Designers of America supporting its cause.

Hudson Yards is pushing to be the next home for fashion week and has Diane von Furstenberg and the Council of Fashion Designers of America supporting its cause. “In all likelihood, fashion week will come to Hudson Yards. It needs a permanent home,” said Jay Cross, president of Hudson Yards, during a preview of the massive West Side mixed-used development on Tuesday at the New York Center for Architecture in Greenwich Village.

Cross and other officials of Related Companies, which is developing Hudson Yards, said the Culture Shed component of Hudson Yards is being created with four runways, studios, exhibition space and a dramatic 140-foot-high canopy that slides along tracks to create indoor and outdoor space. The Culture Shed is being privately funded, with von Furstenberg on its board and spearheading the drive to raise money to build it.

Cross said it was about a $300 million project, separate from Related’s involvement with Hudson Yards, though Related is providing “bits and pieces” so the Culture Shed integrates into Hudson Yards, considered the largest private real estate development in the history of the city. He characterized the Culture Shed as “nondenominational,” meaning it could be used for a variety of events from concerts and award ceremonies to art and fashion shows. “The programming is flexible.”

In 2006, when Diane Von Furstenberg became president of the CFDA, she had a meeting with New York’s then-deputy mayor Dan Doctoroff. “He asked me what I wished for, and I said, ‘Give us a pier for fashion week.’ Dan smiled and we started to talk. The idea of Culture Shed was born.” A spokesman for IMG, which owns Mercedes-Benz Fashion Week, declined comment. Fashion week is currently held at Lincoln Center.

He said Colette would be an example of the type of retailer Hudson Yards wants to attract. Dining, a food market, a cinema and access to the number 7 subway will also be part of the center, being designed by Elkus Manfredi Architects. Talks with retailers and brands are under way, but leases are not expected to be revealed until close to the end of 2013 or at the International Council of Shopping Centers convention next May.

Hudson Yards also includes a public square and huge office towers. So far, Coach, L’Oréal USA and SAP will occupy the South Towers. With these lease agreements, the South Tower is more than 80 percent committed. Related Cos. is negotiating to relocate Time Warner to Hudson Yards from the Time Warner Center on Columbus Circle, which Related developed and could buy from Time Warner.