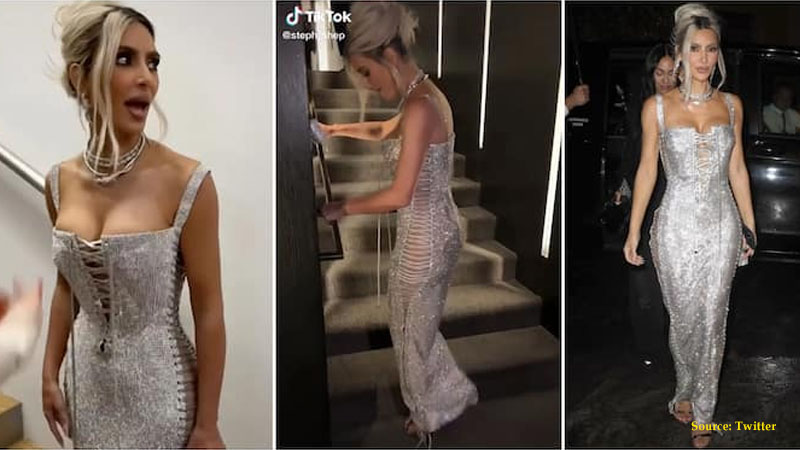 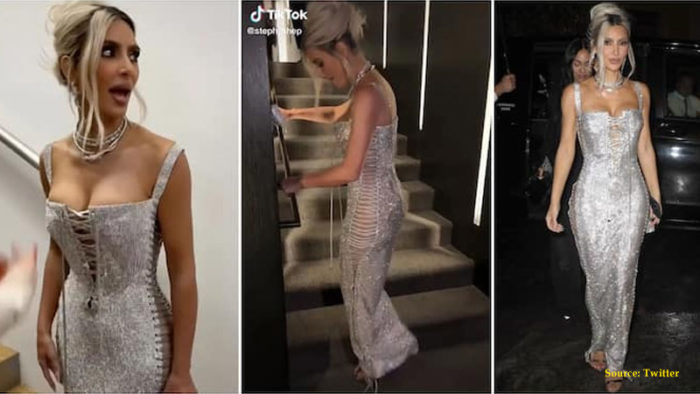 Kim Kardashian is showing her dedication to a good fashion moment. Kardashian stepped out for the after-party in a body-hugging, silver, and sparkly Dolce & Gabbana gown with revealing tie-ups on the neckline, legs, and thighs, after debuting her Dolce & Gabbana collection during a fashion show in Milan.

And the 41-year-old SKIMS founder could barely walk in it. Kardashian is seen trotting over to a set of steps before turning to the side to use a handrail to walk up in a TikTok video shared by her longtime friend Stephanie Shepherd on Sunday.

Kardashian quickly realizes that she’ll have to hop her way up the stairs after attempting to side-step them. On another flight of stairs, Kardashian gets help, as people are seen holding her arms as she takes tiny steps to the top.

“Is there an elevator?” she asks before continuing yet another stairwell. Someone this time holds her dress up so it doesn’t get caught in her high silver stiletto. The stairs weren’t the only thing that kept Kardashian from looking great in her sleek gown.

Shepherd also showed a video of Kardashian attempting to get into a car. The Kardashians star can be seen hopping onto the seat and scooting into position. She leans back in her seat, unable to sit up, as the hilarious video concludes.

“I’ll let you caption this ⬇️,” Shepherd wrote alongside the hilarious clip. In the comment section, many fans were impressed with Kardashian’s skills.

“God gives his toughest battles to his strongest soldiers,” one fan wrote as another added, “The way she jumps those steps lmaooo queen” Another commented, “I’m honestly impressed and she looked 🔥”

The KarJenner sisters are no strangers to having difficulty with steps in a Dolce & Gabbana dress. Kendall Jenner, 26, struggled to walk up the brick stairs leading to the ceremony venue during Kourtney Kardashian’s nuptials to Travis Barker in May because of her form-fitting gown.

Kylie Jenner, 25, posted a video to her Instagram Story showing her waddling up the steep steps in her dress a blush floral gown with a fitted mermaid silhouette which she paired with sensible footwear, what appear to be Birkenstock clogs. Kylie can be heard laughing and complaining about how difficult the stairs are to navigate in the video.

“S–t these stairs are crazy,” she says. The internet’s attention was drawn to the amusing yet realistic fashion blip. The video quickly went viral on TikTok, with some users reposting it and others editing it with audio samples of Jenner’s famous lines, including her “built like an athlete” quote.

Prince George's Comment Proves He Knows William Will Be King: 'Better Watch Out'