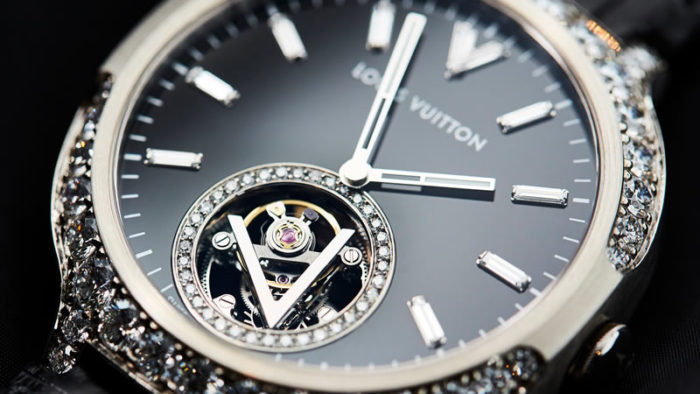 The watch features a skull with a jaw that drops open to reveal its message in Latin — “seize the day.”

Louis Vuitton planted its flag in the center of the high jewelry world last year, presenting an enormous rough diamond — the Sewelo — in the private salons of its Place Vendôme flagship. This year comes a territory-staking move in the realm of mechanical watchmaking, with the Tambour Carpe Diem, to be launched at the Watches and Wonders Geneva digital fair this week.

The chunky jacquemart timepiece features a skull with a gold tooth and a snake imprinted with the house flower logo. The jaw drops open to reveal its message in Latin — “seize the day” — while the snake waves its head over an eye socket. Time is given on demand — the snake has to move to reveal the hour, while its tail points to the minutes. The animations are activated by a push-piece, and last 16 seconds.

The timepiece “perfectly represents the house’s watchmaking craftsmanship,” said Michel Nagas, master watchmaker at the house’s Swiss watchmaking workshops, La Fabrique du Temps. The movement of the watch, which took two years to develop, has more than four complications. Several requests for patents have been filed in association with the timepiece.

Miniature painting and enamel work on the snake and teeth were done by hand, by Anita Porchet, while Dick Steenman did the hand-engraving on the skull, snake and a mini hourglass. The watch comes with a black bracelet in alligator leather.

Louis Vuitton, which began making watches in 2002, is taking part in the Watches and Wonders fair for the first time this year.

“After secretly making making special-order automaton watches for a few private clients, Louis Vuitton decided to reveal part of the secret with this unique piece,” the brand said in a statement.