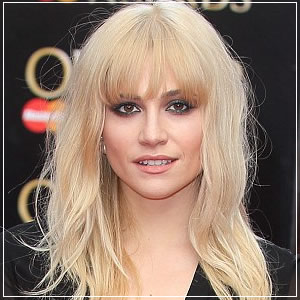 She may not have been nominated for a gong but that didn’t stop Pixie Lott from grabbing attention on the Olivier Awards red carpet on Sunday night. Hitting the red carpet at London’s Royal Opera House in a plunging black dress with a racy thigh-high slit, Pixie, 24, oozed sex appeal.

However, it wasn’t her outfit which set tongues wagging but her new hairdo, as she stepped out sporting a fringe for the first time.

The blonde starlet wore her blonde hair in loose waves around her shoulders with the fringe accentuating her delicate features. She opted for lashings of eye-liner and mascara but wisely kept the rest of her make-up simple as she struck a pose for photographers.

Pixie jazzed up her black dress with hot pink sandals and a matching clutch bag, bringing a pop of colour to the look. Even her nails were painted pink and Pixie confidently struck a pose alongside some of the biggest stars of London’s West End. It’s been a busy few months for Pixie, who has been busy recording her new album in both London and Los Angeles.

In a recent interview with The Telegraph, she discussed working on the record, which will be her fourth album. And no doubt she is happy to be back in the UK, as her boyfriend Oliver Cheshire did not accompany her to California.

During an interview with Marie Claire, the pretty blonde admitted she hopes to one day marry her man. But the star wants not one, but two weddings, explaining she’s dreaming of a ‘massive’ ceremony – as well as a small celebration abroad to go alongside it. ‘I love small weddings in a different country, but I love massive ones in England, so maybe I’ll have two.

‘Hopefully two weddings, not two different marriages!’ she continued, correcting herself. ”But I’m not thinking of getting married yet because I’m still so young.’ The star met Marks & Spencer model Oliver at a catwalk show in 2010 and over four years on, the pair have proven to be a match made in fashion heaven; signing to the same agency Select Model Management in 2011.