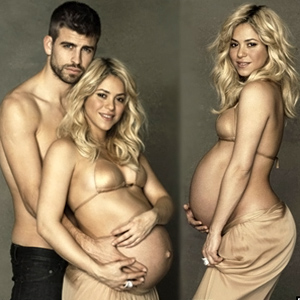 Shakira and her footballer beau Gerard Piqué have released several portraits of the pregnant singer to celebrate the impending arrival of their first child.

Dressed in just a bikini top and skirt, boyfriend Piqué also whipped off his shirt in one of the intimate photos which shows their closeness as they prepare for the birth of their son. The images which were taken by Jaume Laiguana were uploaded to the internet as the couple have decided to team up with UNICEF to host a virtual baby shower.

Shakira, 35, is following in the footsteps of celebrities such as Demi Moore and Britney Spears, who have posed nude during the latter stages of their pregnancies. However rather than posing on a magazine cover, the Colombian born singer decided to share the candid photo on her Twitter page.

Taking over from Gerard, Sharika continues: ‘Thanks to all of you, they will receive in the form of inspired gifts therapeutic food packages, vaccines, and rehydration salts which will help save the lives of hundred of thousands of babies throughout the world.

‘Yet many don’t share the same opportunities. Together we know we can change that.’