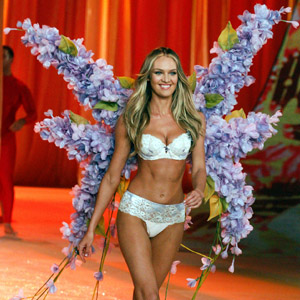 Victoriaâ€™s Secret has topped a brand popularity poll, beating 1,110 other retailers. The lingerie label ranked number one in the annual BrandIndex perception study conducted by YouGov for 2012.

Victoria’s Secret has topped a brand popularity poll, beating 1,110 other retailers. The lingerie label ranked number one in the annual BrandIndex perception study conducted by YouGov for 2012.

The results are determined by examining the answers to US consumer-based questioning. YouGov asked 5,000 people continuously throughout the year whether or not they had heard anything positive or negative about certain brands in the past two weeks – whether through advertising, news or word of mouth. The brands are then ranked from minus 100 to 100 based on the responses – with 100 representing a completely positive reaction, and minus 100 entirely negative.

If a recipient had never heard of the brand it would be ranked at zero. A total of 1.2 million interviews were conducted in total throughout the year.

Victoria’s Secret topped the results poll with a ranking of 21.4, marginally beating US store J.C. Penney in second place. Old Navy came third, with a score of 20.6, followed by Men’s Wearhouse in fourth (18.5), and Macy’s in fifth (17.6).

The most improved brand in the apparel group was Ambercrombie & Fitch, which rose 1.6 points from 2011’s poll – but still retained a negative result over all, with a score of minus 3.3. Levi’s topped the poll in the apparel and footwear category, followed by Nike, with Wrangler in third place. – Vogue

Adele Is Worth Â£15 Million

Don’t Let Us Tell You Gigi Hadid Had One Heck of a Year; See For Yourself