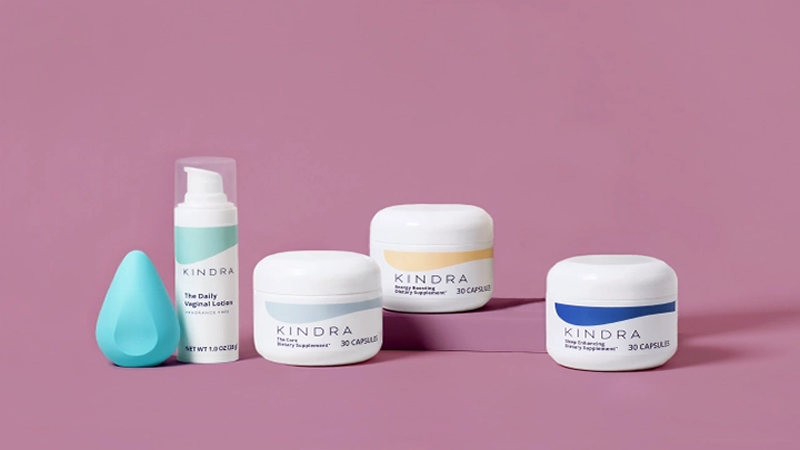 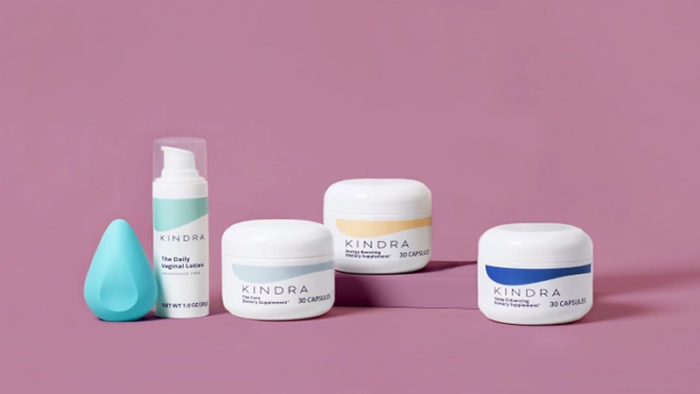 Founders often discovered they didn’t know what was happening in their own bodies, so launched brands to answer personal needs, while helping and educating others.

“For me, the mission of supporting women on their menopause journey perfectly fit with my life stage,” said Catherine Balsam-Schwaber. “I was turning 50. I felt even for myself that I had no education or information about all of these changes that were happening in my body.”

She had some misdiagnoses linked to menopause and no one with whom to talk about it.

“It was such an egregious gap for women,” said Balsam-Schwaber, echoing the story and sentiment of many.

The executive explained she walked into a conversation taking place between Procter & Gamble, which had menopause-related intellectual property and four products, and venture capital fund M13.

That became Kindra, the direct-to-consumer brand for menopause essentials for which she now serves as chief executive officer. (It launched in the U.S. at the end of 2019.)

“Since then, we’ve been growing like wildfire,” she said, of the brand, which in mid-June announced it had closed a $4.5 million seed funding round.

Kindra is not the only fledgling label in the category poised to change the conversation about aging. A host of wellness brands for people going through perimenopause and menopause, such as Avon’s Adapt, P&G’s SeeMe, and Womaness, have been sprouting up over the past few months and years, tackling a segment of the market that formerly had been treated as taboo. It’s also been historically tricky to successfully service, not least due to the stigma often associated with menopause.

There is no small irony to that, especially since it’s a natural, major transition experienced by all people who menstruate.

Menopause is the life stage starting one year after periods stop. In the U.S., it takes place at 51 years old on average.

Changes in hormone levels may result in dry skin, hot flashes and night sweats, vaginal dryness and discomfort during sex, insomnia, and emotional shifts, among other symptoms.

Perimenopause can begin up to a decade before menopause sets in and comes with its own set of issues. During the first three years of perimenopause, for instance, 50 percent of skin collagen begins to decrease.

A huge swath of the population is affected at any given time, so this is in no way niche. In the U.S., 50 percent of female adults are over the age of 50, and they control 70 percent of spending.

Yet, only 5 percent of media dollars target them, according to Alexis Schrimpf, vice president of design, skin and personal care, and cofounder and chief design officer of SeeMe Beauty at Procter & Gamble.

“While every person’s experience with menopause is very individual, the experience of going through the menopause journey is shared,” Balsam-Schwaber said.

What’s become clear to marketers is that people migrate toward products that are straightforward in their messaging and aesthetically pleasing — looking like beauty products, so they can be kept on shelves comfortably and referred to friends.

Overall, product price points tend to be in the accessible premium range at most, and the bundling of products and subscription models can help keep price tags down.

The jury’s still out about whether influencer plugs are necessary for this category nowadays, as the clientele is generally not as selfie-friendly as younger women.

But sharing knowledge is key, such as with quizzes and information on educational and community resources.

New brands in the space are mostly digitally native, not only as that’s a less expensive strategy at launch, but consumers are more likely to purchase such wellness products from the privacy of their own homes.

They likely won’t remain shy for long, however.

“There’s a lot of cultural shift that has happened around the way women perceive themselves in this age group,” Balsam-Schwaber said. “We’re living and working longer, and having children later. Now, you can spend up to 40 percent longer on this menopausal journey.”

There should be no shame in that.

In the mid-1980s, the Blanche Devereaux character in “The Golden Girls” TV series was 53 and spoke of menopause. Fast-forward to today, and Jennifer Lopez, dazzling at 52, is aspirational to people of all ages.

“We have this mental picture of menopause as Blanche Devereaux, but we want to see ourselves like JLo — that’s the disconnect,” continued Balsam-Schwaber.

“So how do we bring menopause into this world where we can see ourselves in the products, stories, and community? That’s part of what we’re trying to accomplish.”

Another reason there’s more buzz around menopause these days is that it’s younger Gen Xers and older Millennials who are entering that phase of life now.

“They have a very different experience with health care, researching online and communities on Facebook,” said Michelle Jacobs, a co-founder, and chief operating officer of Womaness.

“They’re not scared or shy to say: ‘Oh my gosh, I don’t know what’s going on with my body. Does anyone else have this experience?’

“This is the generation that started to talk about having fertility issues, about work-life balance, sexuality — whatever issue was going on with this demographic, they were more than willing to talk about it,” she continued.

“Because there is such a lack of information, education, and research on menopause, [that] generation is going to force doctors to be better educated and have better solutions.”

Balsam-Schwaber noted the most debilitating conditions for people going through menopause are sleep disruption — so fatigue, which encompasses brain fog and mood instability, hot flashes, and vaginal dryness. So at Kindra, they’re focused on those.

The brand’s four products, with estrogen-free and naturally-derived formulas, include the Core Supplement, Energy Supplement, Sleep Enhancement Supplement, and the Daily Vaginal Lotion and Applicator. The vaginal lotion is the brand’s hero product.

Over at Avon, executives in early 2019 asked themselves about when women begin reappraising the choices they make around beauty products, and that’s how they entered the recent menopause and perimenopause discussion.

“As we started to dig deeper, we really realized it was such an untapped conversation,” said Gina Ghura, global head of marketing fragrance and beauty innovation excellence at Avon.

After speaking with people, it became clear that beyond the physical symptoms, there are emotional issues, too, like embarrassment when hot flashes come on in the workplace.

So Avon commissioned an extensive survey in 10 countries. “We also wanted to understand what are the parallels in some cultures and communities.

Among the study’s findings were that 44 percent of women weren’t aware of perimenopause, and 46 percent didn’t expect it.

“There’s a lack of conversation and awareness,” Ghura said. “Even in very developed places like the U.K.”

That had to be changed while offering products to help with some symptoms. Therefore, Avon in January launched in the U.K. three units in its Adapt range, with formulations containing a patented botanical adaptogen to help hormones rebalance, and a specially conceived calming fragrance. There’s a night cream, facial mist, and on-the-go serum.

The idea was not to create a regimen, but instead most-needed products, Ghura explained.

“It feels like we hit at a time where there was a high level of appetite for this type of conversation,” she said. “Gen X — no one’s talking about us. There’s so much to say, to celebrate.”

P&G executives are among the many who agree.

“Forty percent of Gen Xers say they believe they are ignored and overlooked. Fifty-two percent of Boomers say that,” Schrimpf explained. “It tells you right there that there’s a huge need out there for them.”

Schrimpf and college friend Tiffanie Papp, who also was at P&G, realized they were working on products for ever-younger consumers, and teamed with Christi Putman, a research-and-development scientist with more than 20 years of experience studying women’s skin at the company.

She informed them that while menopausal skin ages six times faster and repairs five times slower than pre-menopausal skin, it is 10-times less responsive to traditional antiaging skincare ingredients.

“It works faster to hydrate the skin — that’s a huge benefit,” Schrimpf said.

Thus the SeeMe Beauty brand began three years ago using the extract. (Its name refers directly to the invisibility some consumers feel.) Communication for the brand sold d-to-c and through Amazon, winks plenty to the ’80s, especially the era’s music since SeeMe consumers are largely ’80s ladies.

Names involve humor. There’s the On the Go-Go Mini Line, Sweet Dreams Night Cream and Call Me Hydra-Cream, for instance. A bestseller, among the four products, is the Smooth Out Recovery Serum, and kits are selling well.

“We have tried other product lines for this age group. Always the trick was finding the right way of speaking to [the consumer],” Schrimpf said. “There’s an authenticity to what we’re trying to do.”

SeeMe has been registering month-on-month, year-on-year growth, with a strong repeat-buy rate, according to the executive, who added there’s a tremendous opening rate on the brand’s blogs.

The woman was also launched by friends: Jacobs and Sally Mueller, both women’s lifestyle brand experts. About two-and-a-half years ago, Mueller was at the Mayo Clinic describing some strange issues happening in her body. The doctor said they were related to menopause and gave her a bag of products. – wwd

Meghan Markle's brother dishes dirt on her in latest interview