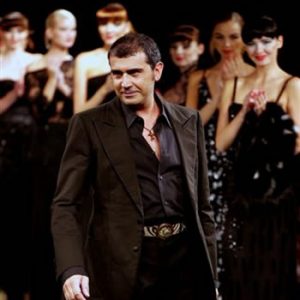 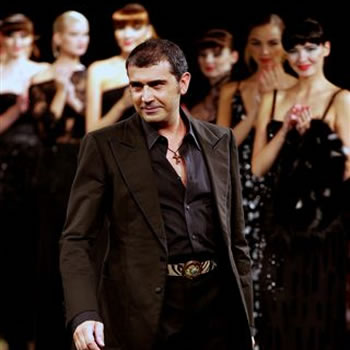 Michele Miglionico was born in Milan on 9th May 1965. His sign of the Zodiac is Taurus. In 1989 he opened his atelier in Potenza.He considers himself a self-taught person although he learnt from his father, a well known tailor in Milan.

Michele Miglionico was born in Milan on 9th May 1965. His sign of the Zodiac is Taurus. In 1989 he opened his atelier in Potenza. He considers himself a self-taught person although he learnt from his father, a well known tailor in Milan.

In 2000 he makes his debut, out of agenda, in Rome during the week of Haute Couture at Palazzo Barberini with a collection made for the Carabinieri. The evening dress made for women just accepted in the army was news. His style is ispired by Valentino and by Yves Saint-Laurent at his beginning.

In July 2000 he is officially in the agenda of the National Chamber of the Italian Fashion. In November 2002 Michele Miglionico opens his first atelier in Rome at 96, Via Veneto next to the Café de Paris.

In July 2003, on the catwalk of AltaRoma, he paid homage to Diana Vreeland, the Director of Vogue USA and Harper’s Bazar USA. Present her son Frederick Vreeland with his wife Vanessa.  In the same year he is invited in Bruxelles, in occasion of the semester of the Italian Presidency  at the European Union, to be shown with the great Masters of the Italian High Fashion (Valentino, Sarli, Gattinoni, Riva, Curiel).

In July 2004 he dresses up Barbie doll and produces a Couture collection just made for her
In the same year he moves his atelier at 79, via del Babuino, just a few steps from Piazza di Spagna.

In February 2005, the designer was invited by AltaRoma in collaboration with ICE, the Lazio Region and the Ministry of Industry, to fashion show in Moscow to represent the "made in Italy" in the world next to big names in Italian fashion: Renato Balestra, Laura Biagiotti,  Gattinoni, Gai Mattiolo, Lorenzo Riva, Rocco Barocco, Fausto Sarli.

In October 2006 the American department-store “Saks Fifth Avenue Chevy Chase” of  Washington organizes a trunk-show for the presentation of the Haute Couture collection autumn-winter. The event is opened  by a défilé at Villa Firenze, residence of the Italian Ambassadors in Washington.

In March 2007 he shows the Couture collection Spring-Summer in Beijing. At the end of the show he is awarded  the Honour Prize by the China Fashion Association.

In August 2008 Michele Miglionico is called by the ICE (Foreign Trade Institute) to represent the Italian High Fashion at “Casa Italia” during the Olympic Games in Beijing.

On 5th November 2009 Michele Miglionico is invited to show his last Couture collection by the Nissan in Amsterdam in occasion of the demonstration of the new de luxe cabrio model Infinity for the Dutch car market.

In December 2009 the designer by the image of Italian-Turkish singer Yasemin Sannino the only soloist on the worldwide debut of the first album of His Holiness Pope Benedict XVI entitled "Alma Mater" concert held in Westminster Cathedral in London the participation of the Choir of the Vatican and the Royal Philharmonic Orchestra.

During the year 2010 take care of the ‘image of the four godmothers (Roberta Morise, Elena Ossola Angela and Sara Tuccia Facciolini) music program designed and conducted by Carlo Conti "I Migliori Anni” with the Lottery Italy 2011 broadcast live every friday in prime time on Rai Uno.

Over the years he has chaired several juries in Italy and abroad for "Young Designer Competition" and held at Institutes and Academies of Italian Fashion as a teacher, lessons in "Master of Communication and Fashion Marketing”.
Several initiatives to which the designer has participated for charities.

Faithful to the aesthetic sense of the Couture, Michele Miglionico’s style is luxurious and  refined, rigorous but not minimal, sober and aristocratic, thought for a sosphisticated and cosmopolitan woman. A woman with a thin, fluid and female silhouette, with a refined sensuality. A good mix of modern romanticism and classicism. Beloved colours: white, black and scarlet red. Red is a costant element of Miglionico’s style; it’s a fascinating moment, of contemporany  refined seduction. It’s a symbol of  love but also of  great passion. Among the favorite crepe fabrics in all its forms, crepe georgette, double wool crepe, soft cashmere, silk mousseline.