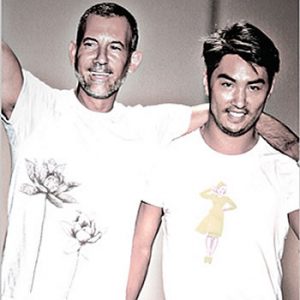 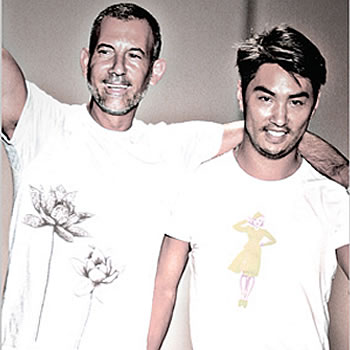 parke & ronen is the product of two remarkable designers with an inspired vision for a unique fashion company.

parke & ronen is the product of two remarkable designers with an inspired vision for a unique fashion company. Preferring chic sensuality to glitz and gimmicks, Parke Lutter and Ronen Jehezkel created parke & ronen. While always in touch with the latest trends, the parke & ronen customer does not fall victim to extreme looks. Refined details, quality fabrics, and exquisite fit are the hallmarks of the parke & ronen look, attracting clients who choose to dress simply yet look sensational.

With over forty accounts, the men’s contemporary collection is sold in top stores across the country and overseas. The white label collections also include the extremely popular swim collection, and newly launched for spring 2003, the brilliant new tee shirt collection, incorporating the hallmarks of parke & ronen fit with original screen-printed art.
parke & ronen boutique:

Marked by its distinctive red label this is the duo’s higher end collection.. Encompassing both mens and womens collections, it is available exclusively at the parke & ronen store in the trendy West Chelsea neighborhood of New York.

When Ronen Jehezkel, a native of Israel, arrived in New York, in 1991, he wanted to literally take his dream of fashion success to the streets. With a mere $500 investment and small collections of vests, produced in his Soho loft, the seeds of this young, innovative company were planted. Under his first company’s name, Moda In, he sold successfully in street fairs across New York City. In addition to turning a nice profit, the success of this venture allowed Ronen to develop his love of face-to-face interaction with customers. A tradition that has remained a cornerstone of the designers’ philosophy. Building on the initial success of the street fairs, Ronen moved his operation to a studio and storefront in Tribeca. Here Parke and Ronen Collaborated on their first creative effort together, a line of dresses for Spring 1996. The two met in 1993 and their official business partnership is marked by the incorporation of PR Design Co. in June 1997, of which they are co-owners.

The Two designers contrasting backgrounds and training combine into a modern approach to style for the savvy customer. After receiving his bachelor’s degree from Amherst College, Parke Lutter came to New York to pursue a career as a fashion designer, where he enrolled in the Fashion Design program at the Parsons School of Design. After receiving his B.F.A. from Parsons in 1997, Parke joined forces with Ronen to open a new company and launch parke & ronen. Ronen Jehezkel arrived in New York City in 1989 after having attained his degree in Alta Moda (Italian Haute Couture) from the highly regarded Instituto Europeo Di Design in Rome, Italy. The partners backgrounds fuse the European traditions of haute couture and the American sensibilities of Seventh Avenue, resulting in an exceptional creative synergy.