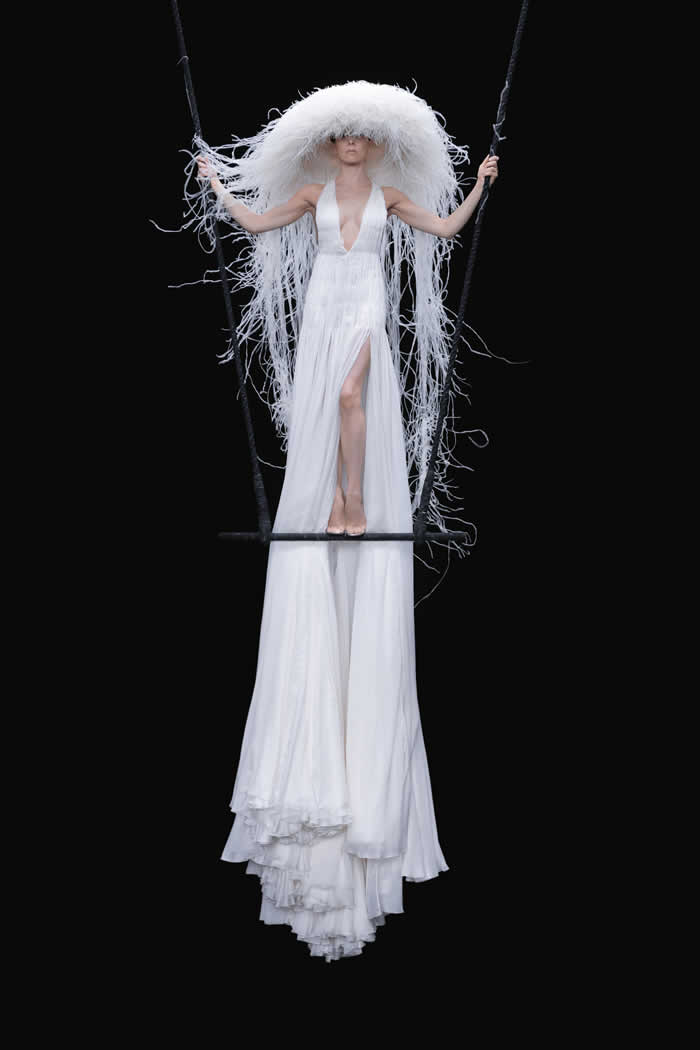 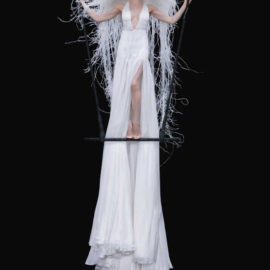 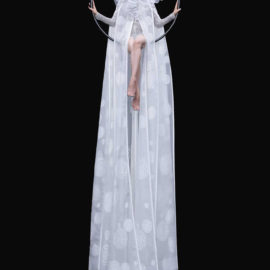 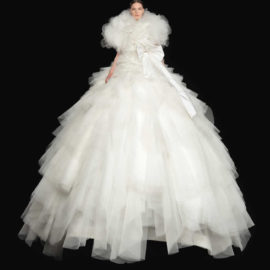 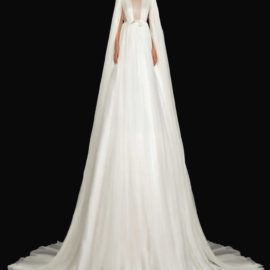 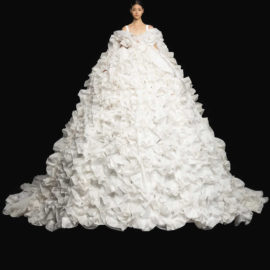 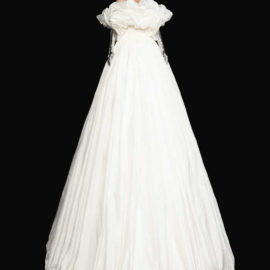 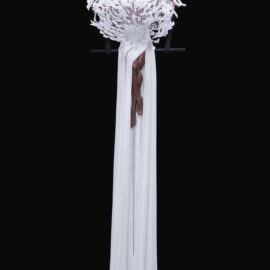 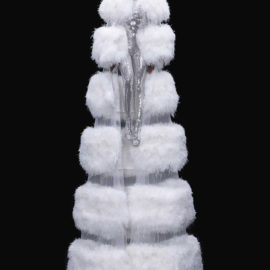 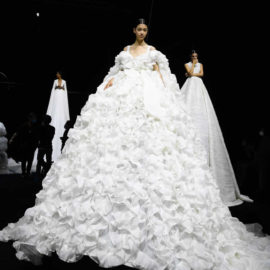 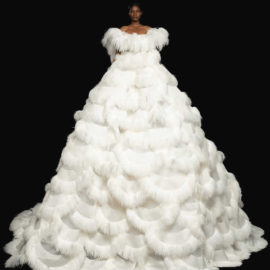 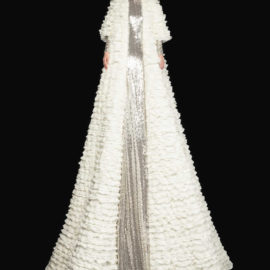 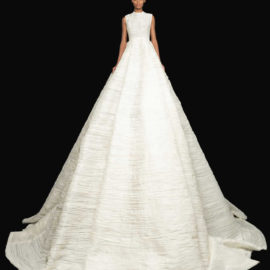 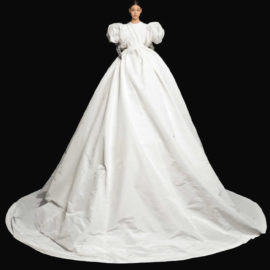 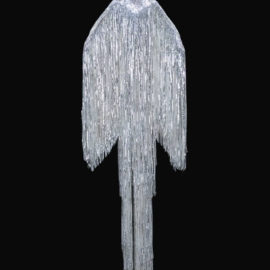 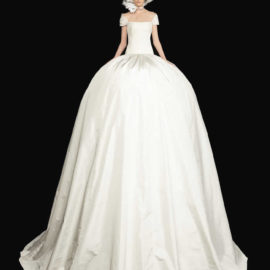 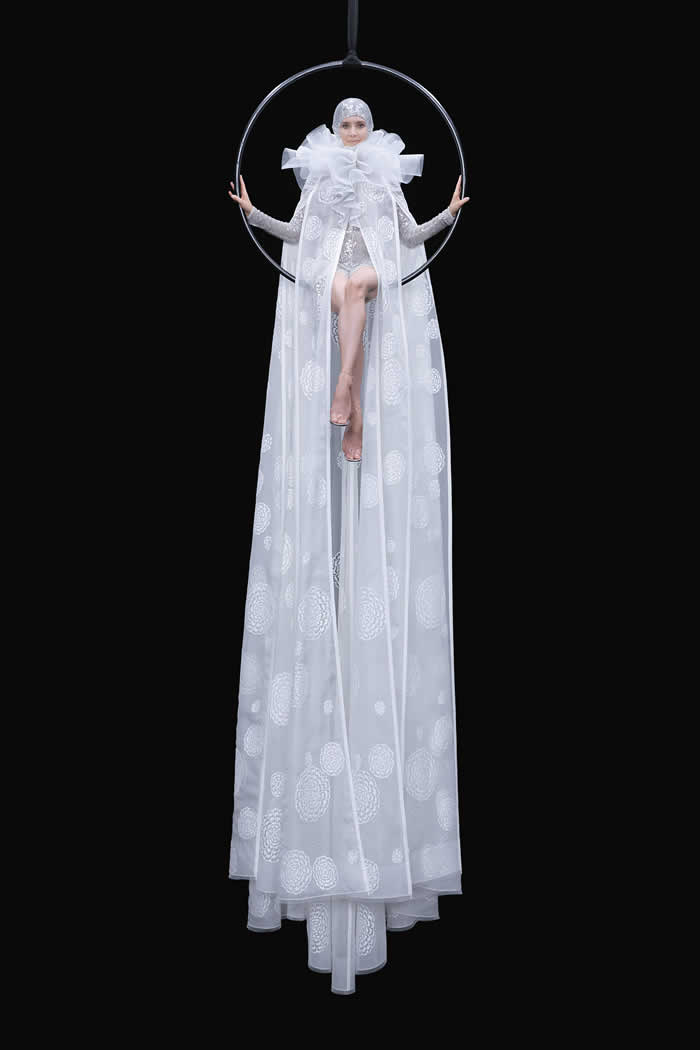 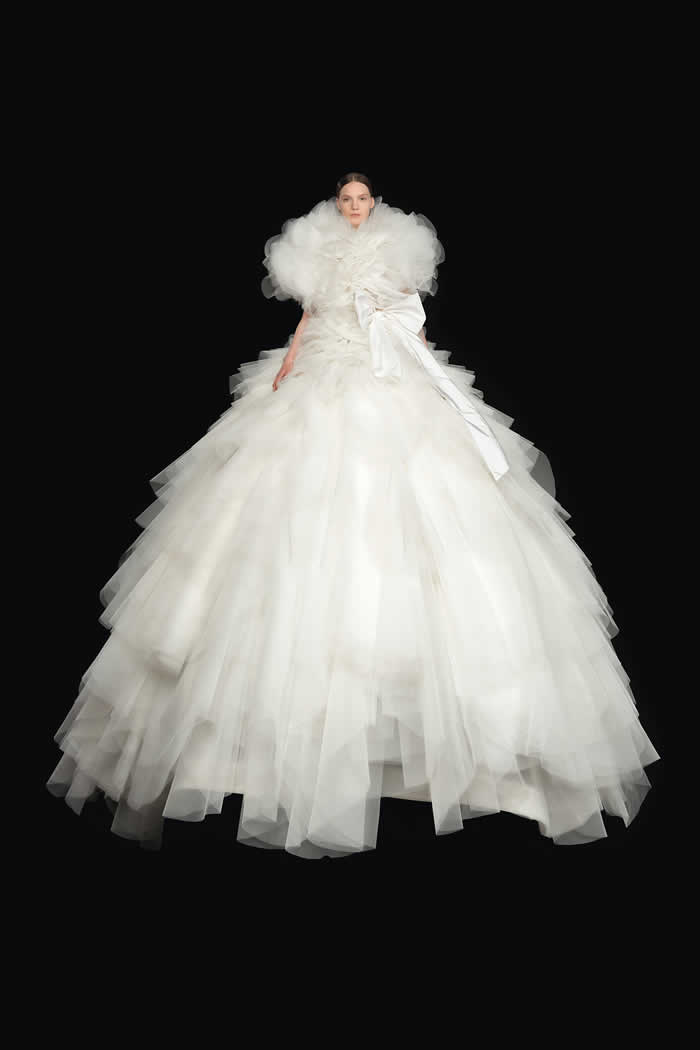 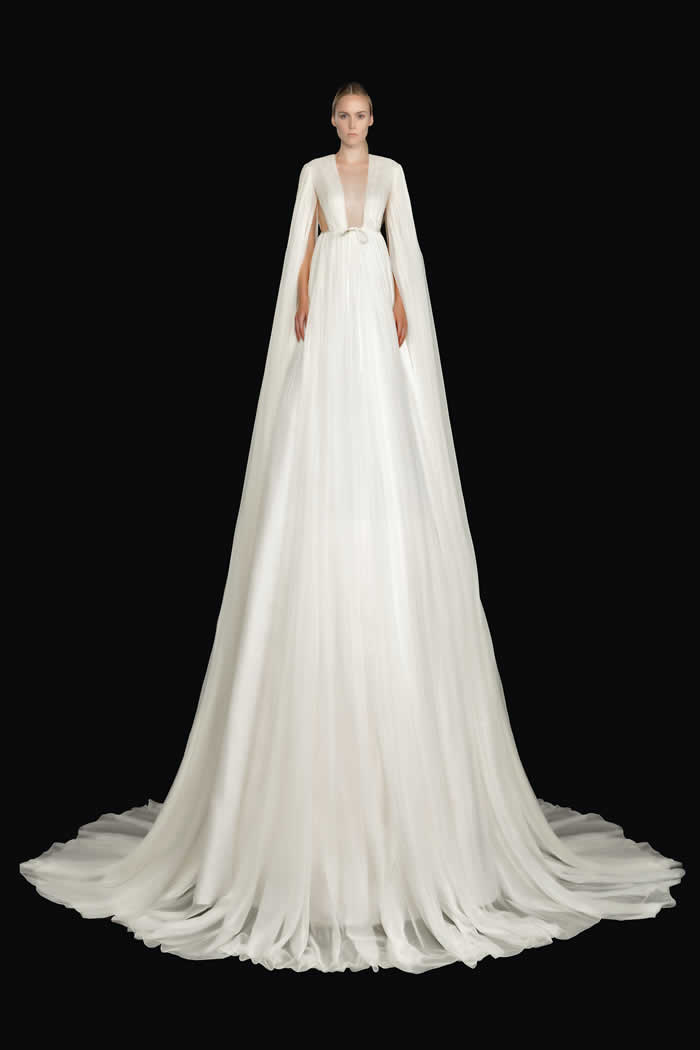 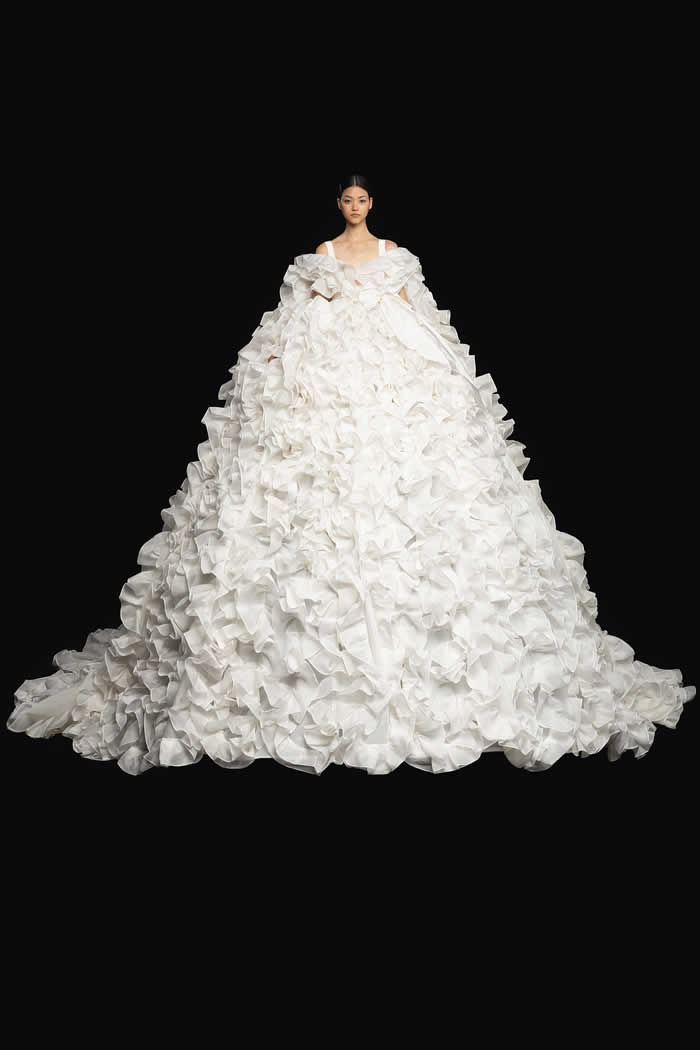 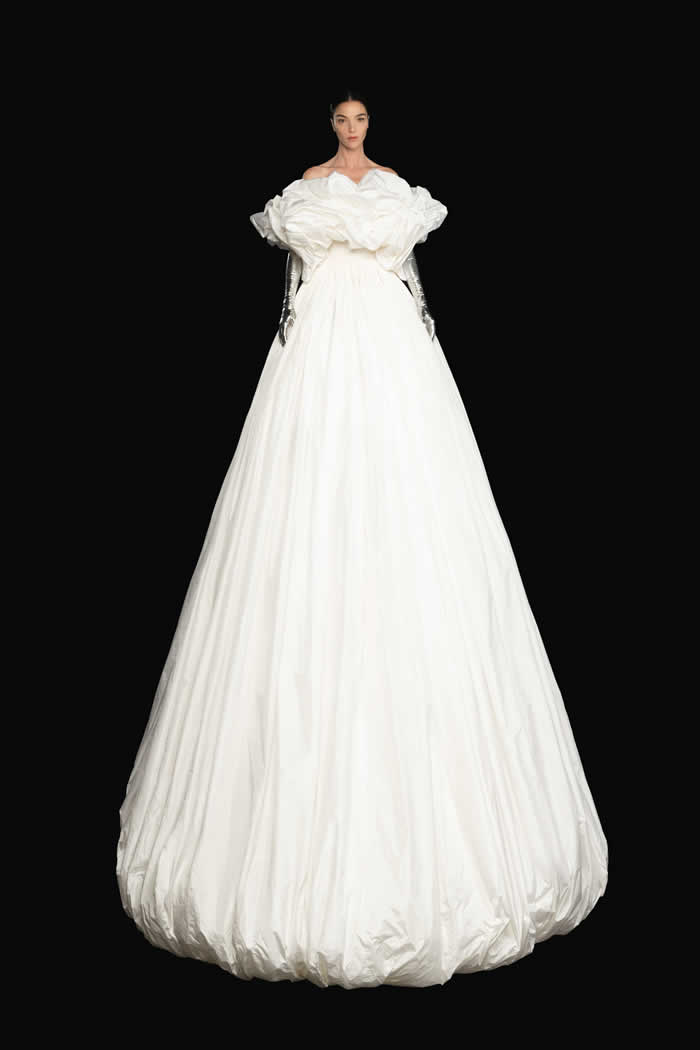 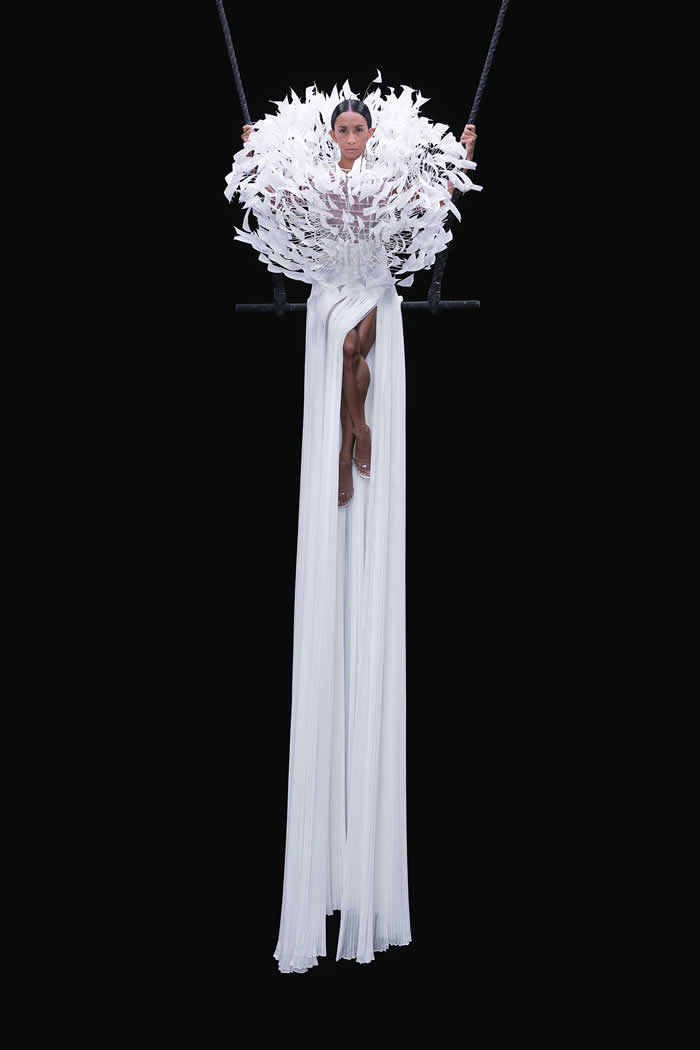 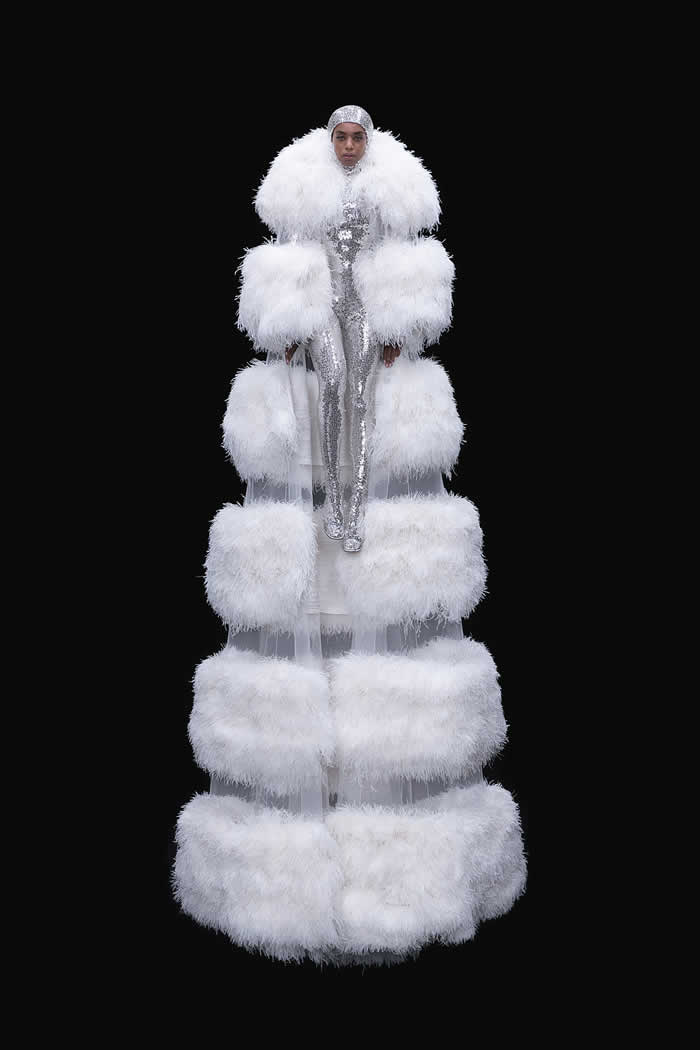 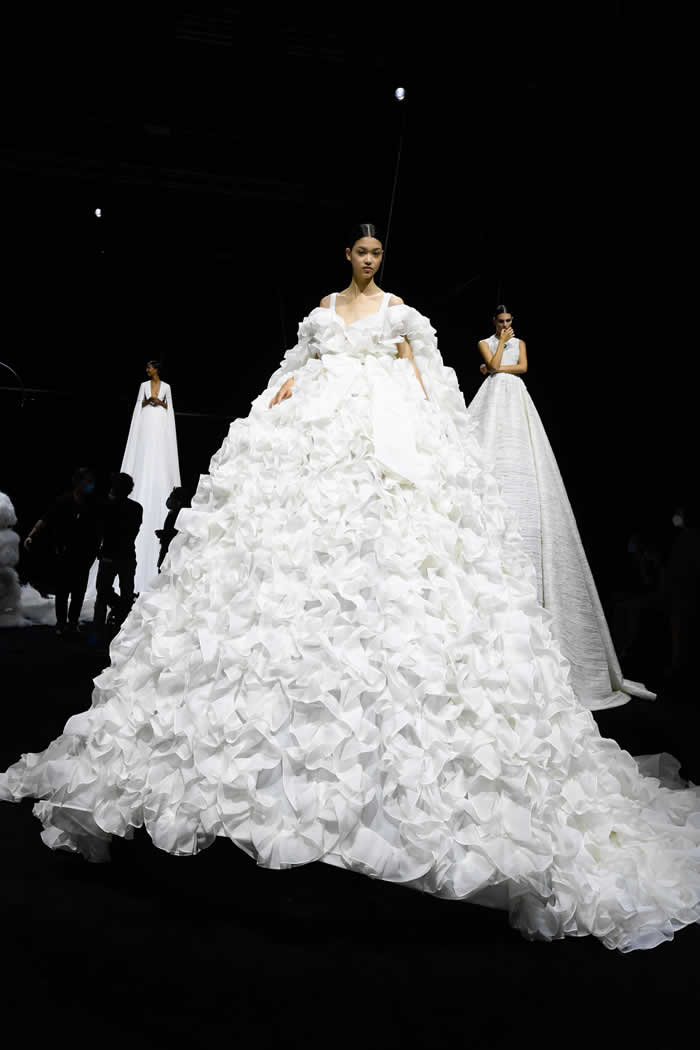 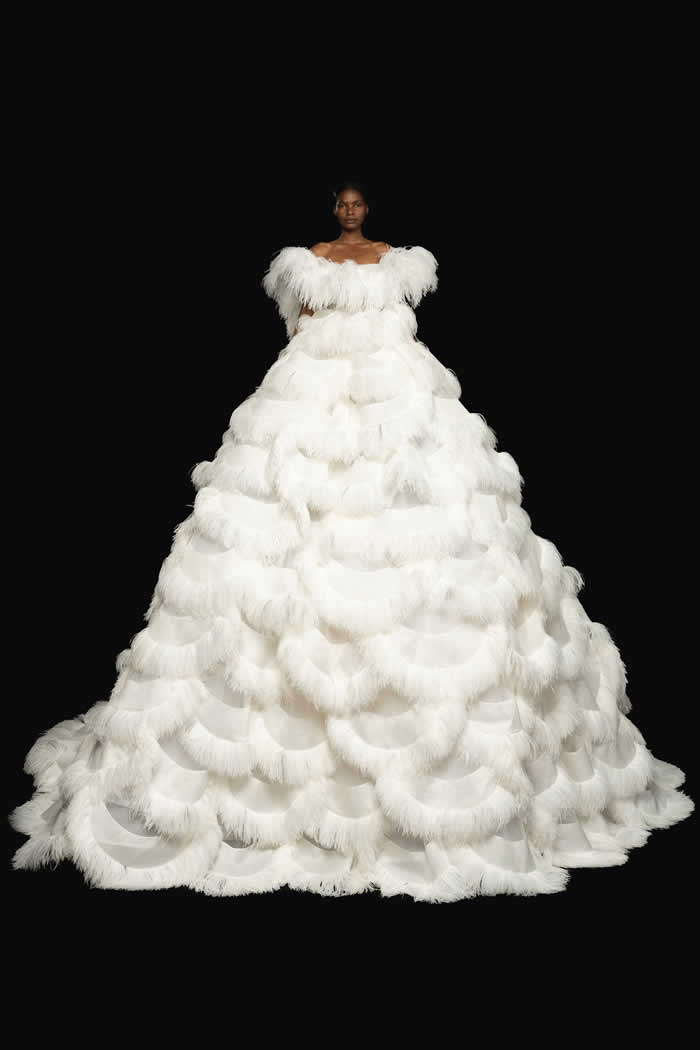 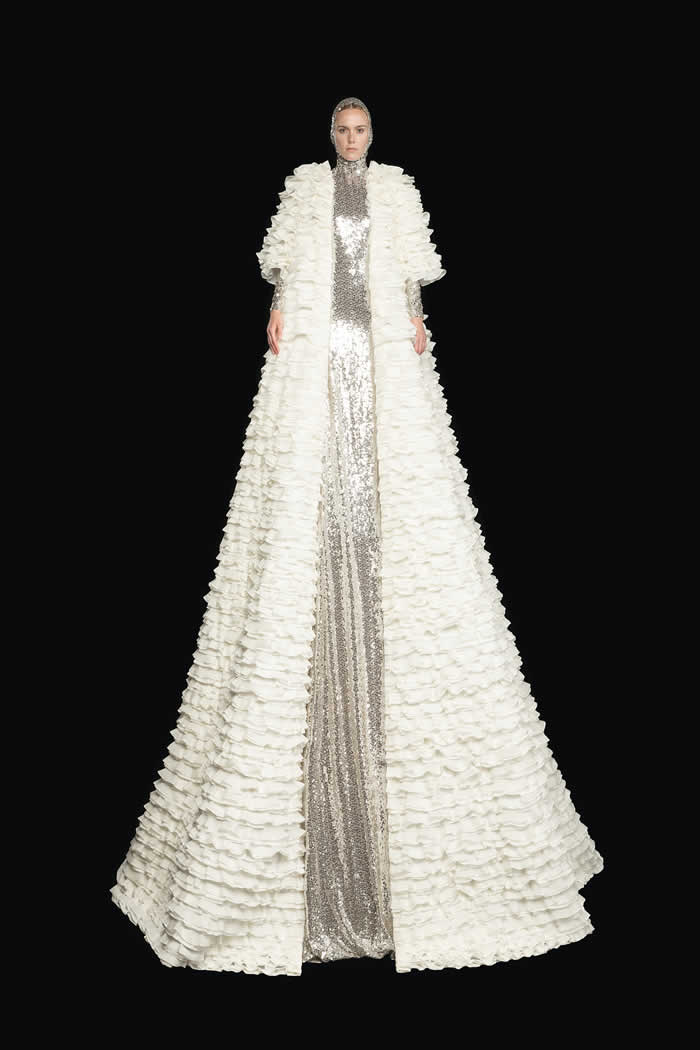 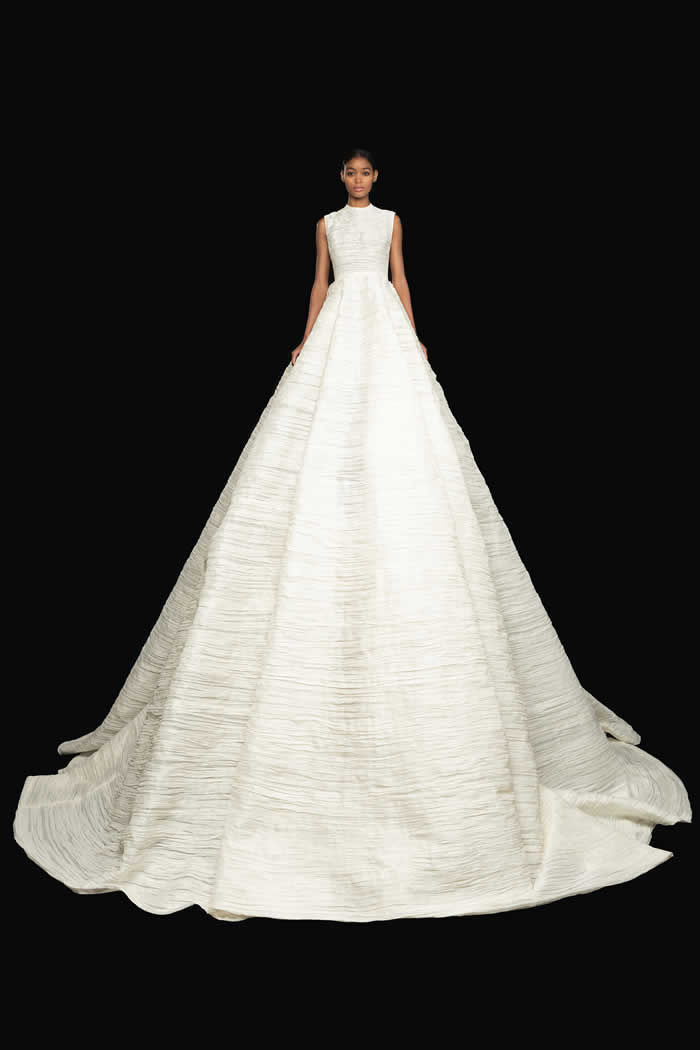 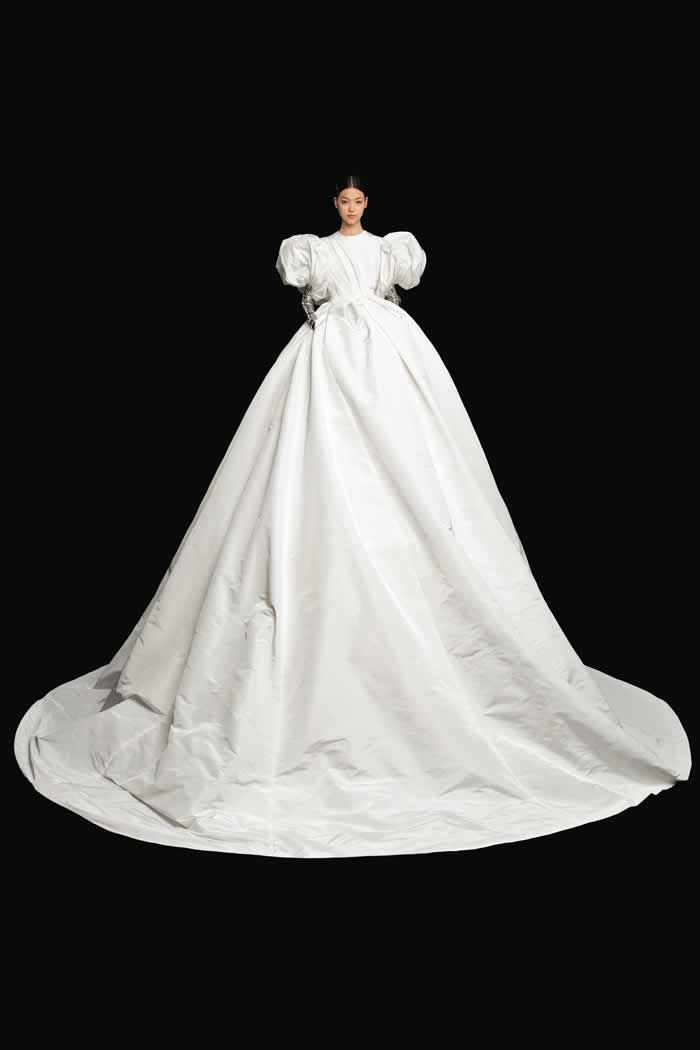 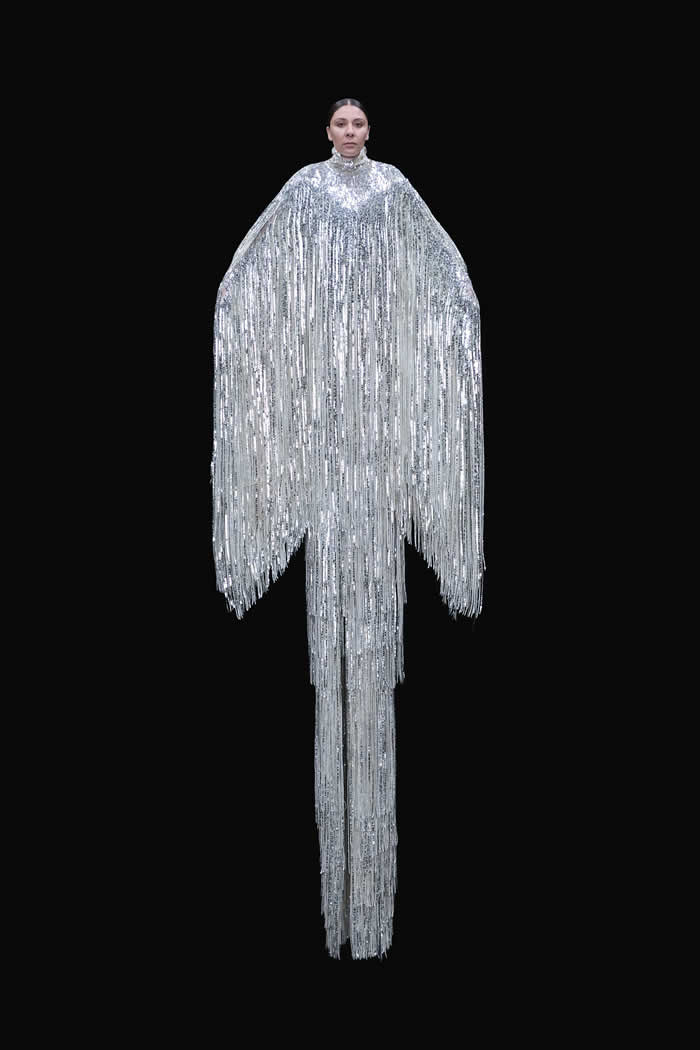 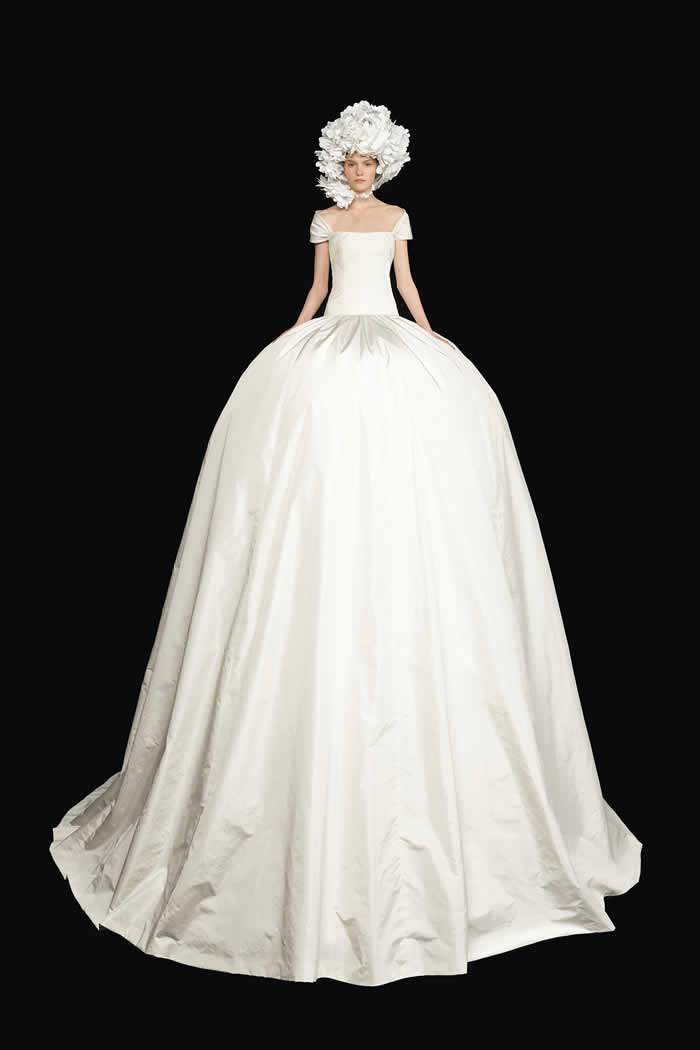 I wanted to place fashion, women and poetry at the center of it all,” said Pierpaolo Piccioli. It could have been the understatement of the year.

Commenting on his fall couture collection for Valentino, the designer addressed a small group of journalists at the Cinecittà studios outside Rome, who were catching their breath after a performance that included a riveting video filmed by Nick Knight, followed by a presentation of 15 stunning white gowns as high as 16 feet.

Models ranging from Mariacarla Boscono to Vittoria Ceretti were either delicately perched on swings suspended from the ceiling or installed on towering, hidden platforms — the white of the dresses dazzling in the all-black studio.

Talk about larger-than-life fashion. With these extreme and radical proportions, the couture gowns were an ode to the Valentino atelier’s petites mains and their exquisite craftsmanship. In fact, in the show notes, Piccioli named the seamstresses who contributed to each gown, clocking in, for example, 1,300 hours on a tulle and organza cape embroidered with white lace laminas and seersucker and silver lamés on the hems, or the 4,000 hours on the organza and white tundra cape dress entirely covered with ruffles and 770 feet of fabric.

The white palette reflected the rebirth Piccioli envisaged down the road while he was in lockdown. The collection, he said, needed to be “entirely different and overcome that feeling of being constrained.”

The designer asked Knight to be part of the creative process, “so that his intervention would not replace the show, but substitute the embroideries, the blooms and the colors with digital projections, interpreting water, air, earth and fire while enhancing as much as possible the human art behind couture.”

Back in March, Piccioli realized it was not going to be possible to hold a regular couture show, but he also felt he “did not want to compromise and on the contrary do something radical, leaving a strong, extreme sign.”

The storied Cinecittà studios served as the backdrop for the film and the performance because they are “the natural realm of dreams, where dreams are made,” and the perfect location for couture, which is “where you can dream the most,” said Piccioli, who was clearly moved by the event.

The designer did not allow the pandemic and the lockdown to prevent him or his couture clients from dreaming, he continued, “challenging the moment.” And he underscored he liked dreams but not fairy tales, which are “distant and far from reality, while you can dream every day.”

That said, in case anyone needed the footnote, he pointed out that the gowns would be adapted for his clients — one quick reality-check.

Piccioli said he “really wanted a live performance” and not only a video because he liked the two different point of views and the juxtaposition between reality and fantasy — “pixels and all,” which he expected to create a sense of estrangement compared with the harmony of the clothes and the beauty of the models.

He chose to work with Knight “because his language is cold, but in a way I am interested in and it is the opposite of the human warmth of the atelier and the people.”

“I don’t think digital is my world — I belong to the atelier world — but I like to enter into a conversation with it, and I don’t demonize it. It gave a new opportunity to the atelier when we could not dye, embroider or print,” the designer added.

FKA Twigs — who performed at Valentino’s men’s show in Paris in January — was another important part of the creative process, explained Piccioli. “It was one of my first intuitions, I wanted her lyrical, individual, strong and personal voice.” In addition to an unreleased piece, the artist redid “Mary Magdalene” for Valentino, “in a different context, with no other instruments that would attenuate her powerful voice.”

The performance was called “Of Grace and Light,” and Piccioli said “grace is too often forgotten. It’s part of humanism, and perhaps my cultural roots and aesthetics go back to Italian humanism, when grace was one of the most recurring words in art by Piero della Francesca or Beato Angelico.”

Newly installed chief executive officer Jacopo Venturini took in the spectacle — a taffeta and pouf dress; a stunning tulle and organdy coat embroidered with feathers, with a jersey hood embroidered with silver sequins, and a taffeta, crinoline tulle and velvet dress with white radzimir.

“Fashion is magic, and one of its strengths is the creativity and human touch behind it. I think creativity was not at the center of the conversation, even before the lockdown. We must stop the focus on marketing and numbers – do you agree Jacopo?” wondered the designer to a round of chuckles.

“I have always said that we must not mirror but react to a historical moment, and propose beauty and dreams so that the fantastic becomes real. The effort behind the clothes must not be seen, the months of work, the draping, otherwise it all becomes technical and not magic. The lightness comes in when the efforts vanish.”