2 months ago
by John Smith 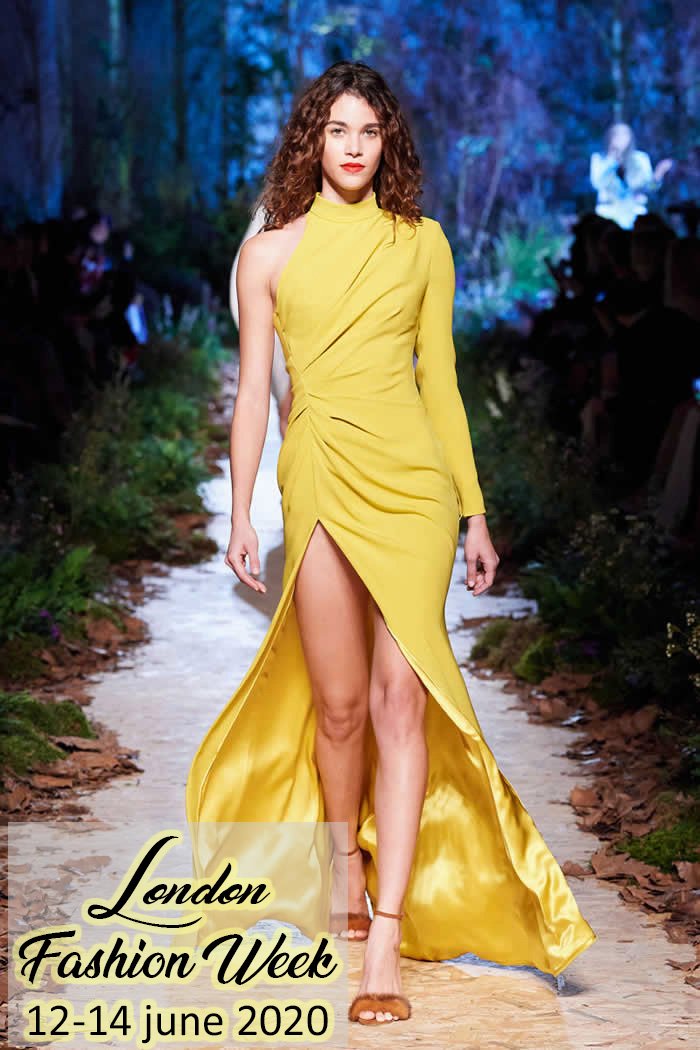 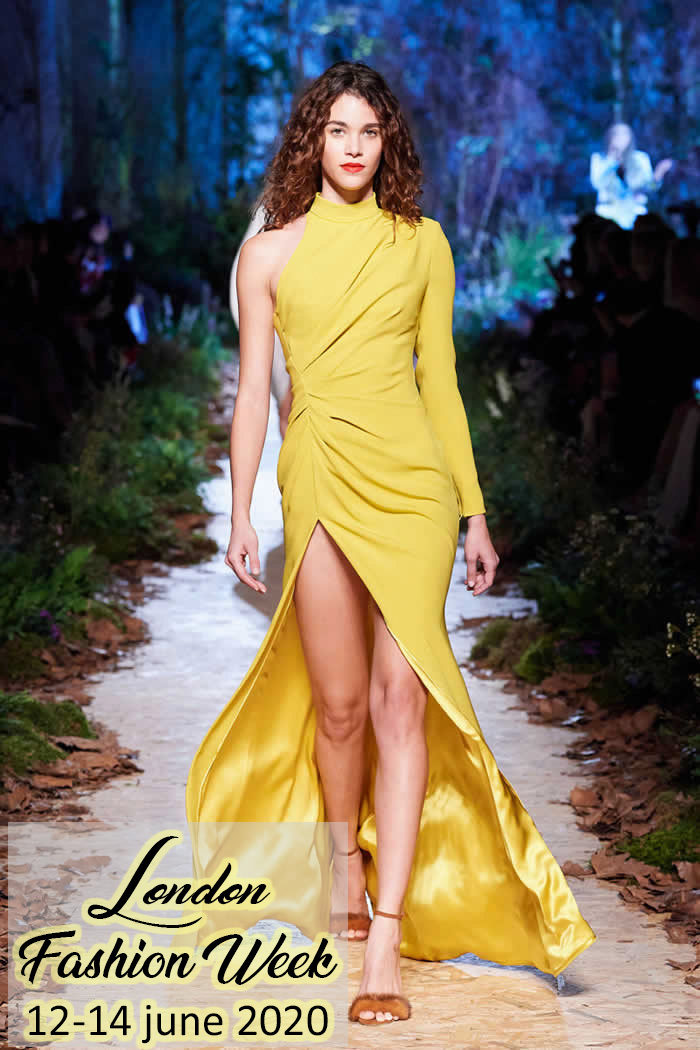 The digital platform at londonfashionweek.co.uk is freely accessible globally for both the public and trade audiences, embracing the cultural commentary and creativity for which British fashion and London are known. Bringing the fashion community together, the platform hosts exclusive multimedia content from designers, creatives, brand partners, media, retailers and cultural institutions enabling collaboration and bringing together fashion, culture and technology.

This new digital experience will work as a global meet-up point, offering interviews, podcasts, designer diaries, webinars and digital showrooms, providing the opportunity  for  designers to tell their stories and share their experiences from the last few months. As well as the LFW schedule, the British Fashion Council (BFC) today releases new data from Oxford Economics, reinforcing the importance of the fashion industry to the UK economy. In 2019, the British fashion industry directly contributed £35 billion to the UK GDP, a 9.38% increase from 2018, with the number of people employed by the industry remaining constant year on year at 890,000 (source: Oxford Economics).

Despite last year’s growth, the impact of COVID-19 on the fashion industry is considerable, as 73% of fashion businesses have already experienced order cancellations*. Now more than ever, the BFC acknowledges the necessity to look at the future of LFW and the opportunity to drive change, collaborate and innovate in ways that will establish long-term benefits, develop new sustainable business models and boost the industry’s economic and social power.

Over 100 designers will be present on the LFW digital platform this June. 34 designers are part of the official LFW schedule while over 33 will also feature on the Explore section, with either new content or assets from their current collections, along with many more activating profiles for a presence on the platform.

Additionally, 34 retailers, 23 media and 6 brand partners from around the world are activating on the platform through unique content.

The LFW schedule is a number of specific timed moments, which will take place from Friday 12th to Sunday 14th June. Those can be added to calendars in order to tune in at specific times and join the conversations, collection launches and events. Once the content has been published, it will be available to watch at any point.

Ahluwalia is creating an interactive and virtual gallery space to showcase the brand’s new book, Jalebi. The public will be able to explore the space and walk around this new digital world.

BIANCA SAUNDERS will be launching a new Zine and host a panel discussion with Joshua Woods, Jess Cole and Matt Holmes.

CENTRAL SAINT MARTINS MA FASHION will present Class of 2021 Fieldwork material produced by MA Fashion students at a distance engaged in the process of design; in its purest, almost abstract form.

CHALAYAN – renowned designer Hussein Chalayan will be doing a live ‘In Conversation’ with Elise By Olsen as well as presenting a film with behind the scenes footage of the making-of his SS20 collection.

DANIEL w. FLETCHER – Netflix’s Next in Fashion, Daniel w. Fletcher is launching a new collection available to buy immediately through his e-commerce and is discussing the collection with British Vogue’s Naomi Pike.

John Lewis & Partners and BFC have teamed up to celebrate fashion and the power of self expression by asking the nation to dress-up in an outfit that brings them joy, and share videos of themselves creating their very own catwalk moment in their home to raise money for charity. Highlights will be made into a film that will be showcased on the LFW digital schedule on Sunday 14th June – this will be the first time a fashion show created with content generated by the public has been part of LFW. Anyone can enter by posting a video using the Hashtag: #LFWCatwalkChallenge and tagging @johnlewisandpartners on either their Instagram grid or stories. For every video entry including @johnlewisandpartners and #LFWCatwalkChallenge the brand will donate £5* to the BFC Foundation Fashion Fund for the Covid Crisis.

JORDANLUCA – Jordan Bowen and Luca Marchetto will tease their SS21 collection through film.

KA WA KEY – the London-based label will premiere ‘There’s No Place like Home’. Inspired by The Little Prince, different fairy tale characters and British nursery rhymes, the film highlights the journey of love, using only a green screen.

LAVAZZA are London Fashion Week’s Official Coffee Partner. LAVAZZA are bringing to you a ‘Coffee-tail’ video tutorial with Matthew Zorpas, showcasing how to make the most out of the best LAVAZZA coffee.

Louise Gray – An escort through the Louise Gray world, this film features new pieces to be launched online and for wholesale orders.

LYpH – Avant-garde clothing company LYpH will play with video, audio and imagery to present its new collection and campaign.

Marques ‘ Almeida – acclaimed designer duo Marta Marques and Paulo Almeida will launch a detailed documentary showcasing their new capsule collection including the making-of their new collection under a sustainable sub-brand.

Matthew Miller – menswear designer Matthew Miller will present a video presentation and campaign, exploring ‘The New Normal’ with exclusive product drops that are not produced until sold.

MTV – At London Fashion Week February 2020, BFC, MTV, ICEBERG and River Island announced the launch of the ‘Music Meets Fashion Competition’. Fashion students from the UK and select International Design Colleges were invited to design a collection by MTV that merges music, fashion and sustainability. This season the LFW schedule will showcase an overview of the competition so far, including application highlights. The digital LFW platform will also host exclusive interviews with each of the competition judges.

Mulberry – British heritage brand Mulberry will host an exclusive performance as part of their virtual ‘My Local Series’ to celebrate LFW. Artist to be announced shortly.

NABIL NAYAL presents his tenth collection, Chapter X: The Archives in Blue with new unseen footage, taking a retrospective look at his archives and hero pieces.

Natasha Zinko x DUOltd will launch the SS21 Creatives presenting their new collection with models through film and is working with American luxury multi-brand boutique The Webster to create 3D renderings of the collection to be showcased within a three dimensional space inspired by the aesthetic and architecture of their Miami and Los Angeles boutiques.

Nicholas Daley is presenting ‘The Abstract Truth’, a behind-the-scenes film of his AW20 collection by Amy Douglas.

palmer//harding – Levi Palmer and Matthew Harding will host an Instagram Conversation, talking the audience through their inspiration and design process for their AW20 collection.

Per Götesson will show a stop-motion film by Patrick Waugh on key looks from the Per Götesson archive, the backdrop is created by Tony Hornecker and styled by Gary Armstrong.

Preen by Thornton Bregazzi will present a pause in time, a refresh, a season-less campaign.

RIXO will present a behind-the-scenes film of their Resort 21 lookbook shoot on-schedule.

ROBYN LYNCH will present a one-off capsule collection supported by Rapha with a film documenting the making-of the collection with a lookbook in collaboration with Joe Cruz and styled by Ben Schofield.

St James’s & Regent St. – London destinations St James’s and Regent Street will host a panel discussion about the future of retail and how looking to our heritage can help futureproof industry decisions.

TÍSCAR ESPADAS – Royal College of Art graduate Tiscar Espadas will introduce a small capsule collection with a film made during the lockdown exploring the narrative of her brand.

TONI&GUY are London Fashion Week’s Official Haircare Partner. TONI&GUY and LFW celebrate their 15 years of partnership with a retrospective film of the brand’s involvement at London Fashion Week, styling the hair for some of London’s most iconic shows.

Xander Zhou will present a campaign film of his AW20 collection.

XU ZHI will unveil a film for his recent AW20 collection.

The home of London Fashion Week Digital, Explore tells the story of London’s individuals and businesses, rich in creativity and culture. The Explore section is made up of content created by BFC, the designers and a number of brand partners, media and retailers. Make sure not to miss the below highlights:

British Fashion Council Fashion Forum Podcast – The first BFC podcast includes some of the biggest and most current names in fashion, art and culture, promoting British creativity on a global scale kicking off with BFC Ambassador and entrepreneur Tinie Tempah in conversation with Dylan Jones, BFC Menswear Chair. Tune in here.

Edward Enninful, Editor-in-Chief British Vogue and Sadiq Khan, Mayor of London discuss the global outcry against systemic racism, and how London’s recovery from COVID-19 must address this and other inequalities in our society.

JOYCE Podcast: Live Connected – The eponymous concept store JOYCE will host two episodes from the second season of their podcast series, featuring conversations from some of the world’s most creative minds including multidisciplinary polymath Trevor Jackson who talks to David Hellqvist of Document Studios about three decades of prolific creative output and noted fashion writer and editor David Hellqvist, speaking to Jonathan Anderson about society’s generational shift, how fashion has to ‘eat itself’ and the importance of making mistakes.

Justine Simons’ Digital London – The Deputy Mayor of Culture and the Creative Industries selects her top digital cultural choices to enjoy during London Fashion Week, highlighting some of London’s world class museums, theatres, venues and artists. Through clever combinations of 360 videos, photos, interactive timelines and livestreams, they have all created content that allows to take in some of the unmissable cultural highlights without leaving your home.

LFW Creative Conversations – a YouTube series hosted by Bruce Pask, Men’s Fashion Director Bergdorf Goodman and Neiman Marcus featuring Anatome, Bianca Saunders, Country of Origin, Drakes and Grenson. The content focuses on interviews of the creatives and their brands, delving into their worlds and enabling viewers to discover new and exciting brands.

LFW Handbook – your guide to LFW, with contributions from the editors of British GQ and Evening Standard. An essential read to take you behind the scenes of the digital event.

LFW Highlights – BFC is working with Smartzer, an interactive technology that will be used to convert regular video content into clickable experiences. Viewers will be able to click on items featured in the videos to unlock a deeper in-video experience and discover the designers.

LN-CC ‘Late Night-Conscious Campaign’ is an initiative designed to support luxury brands to produce sustainably while shining light on the issues faced by the industry and offering a real alternative for their customers. The campaign is in partnership with ‘The Bear Scouts’ who will be providing their expertise in sourcing and the first issue to be highlighted is ‘WASTE’. Poet and activist Kai Isaiah Jamal will be part of the performance.

Tomfoolery, a London based writer, performance artist and filmmaker will present What Are You Drawing, a new piece commissioned for VOGUE Italia June Edition that dedicates itself to children around the world, their purity and rebirth into a new society. His latest work includes The Great Realisation, a bedtime story of hope and optimism for the future, which has now been viewed over 60 million times around the world.

Over 100 designers will be activating their profile pages from 12th June with introductions to the brands, their latest work, their social media activity and with links to line sheets and contacts for sales and press requests. A number of them will also produce new content to be hosted both on their Profiles and in Explore. These are:

The generosity and commitment of our partners, suppliers and supporters is more vital than ever. Please help us by acknowledging their support for LFW June 2020 alongside our Official Suppliers: Bags of Ethics, Fashion & Beauty Monitor, Getty Images, Launchmetrics, S’well and Official Supporters: The Department for International Trade, The European Regional Development Fund and The Mayor of London.