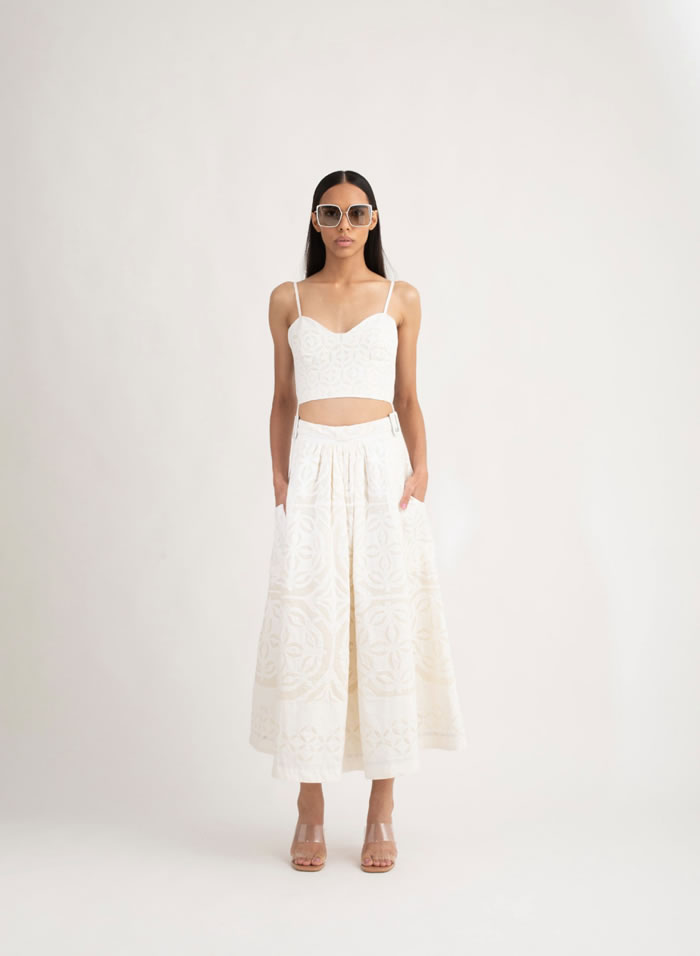 While there were fewer exhibitors and less buyer traffic, brands said they continue to see strong sales in the category.

Regular attendees felt disoriented at the first in-person SwimShow since the shutdown. Mega booths were absent from the annual trade show at the Miami Beach Convention Center and there was an overall sense of calm.

Hungry to touch and see collections again after months of Zoom and Joor, buyers at the show from July 10 to 13 didn’t mind that many of the usual corporate brands weren’t allowed to attend per their companies’ COVID-19 policies, or that most international brands from Europe, Australia and Brazil couldn’t exhibit due to production and travel issues.

Read Also:  6 Summer Outfits You Can Wear to All Your Events This Season

More than 350 brands participated, compared to the traditional 2,500 lines, according to Swimwear Association of Florida executive director Judy Stein, of the incredibly off year.

“This was one of the hardest shows to produce since so many people were on the fence whether they’d be able to come or not,” she said, juggling dropouts and additions up until the final days. “It’s smaller, but it opened up a lot of opportunity for some brands, and buyers are writing.”

Pent-up demand altered the typical chain of events this time of year on the swim and resort calendar. Rather than take notes and rush from pre-booked appointment to appointment, retailers wrote orders and noticed new lines and undiscovered gems like Là Fuori from Los Angeles.

“Pink Revolver boutique from Tulum wrote a full-page order,” said Randa Allen, sales director for the year-old ready-to-wear line that debuted its swim division here. “We signed up three weeks ago, but I did an email blast to 200 stores.”

Là Fuori founder and designer Vidur Adlakha spoke about his passions for luxury, sustainability, and fair trade after witnessing forced and child labor while manufacturing private labels for big-box retailers.

“I support true craftsmen,” he said of collaborating with artisans in India, Morocco and Murano for a garden skirt’s hand-cut and hand-applied overlay, and beaded maxi dresses and bishop-sleeved blouses.

Conglomerates’ booths were barely recognizable. Manhattan Beach significantly downsized its booth to 10-by-40 feet and focused on core brands La Blanca, Maxine of Hollywood, 24th and Ocean and Hobie, its last remaining license after dropping a bevy of licenses including Kenneth Cole, Trina Turk, and Ralph Lauren.

“Are brands really important anymore after e-commerce changed everything, and license really worth the money? I’d rather pass on the savings to the consumer,” said chief executive officer Allan Colvin, who introduced affordable collections here.

“Specialty stores merchandise swimwear by look and cut, not brand,” said Megan Riddle, director of design and merchandising for new lines Sunshine 79, a contemporary take on ’70s influences like rainbow graphics that retails below $200, and Citrus, whose reversible suits designed for active lifestyles retail for less than $100.

Jantzen Brands took a small booth, too, for its tightened roster. Established in 2019, the Commerce, Calif.-based conglomerate hired a Colombian designer to revamp Jantzen and bought or partially invested in Phax and Cosita Linda from Medellín.

After withering on the vine during its Perry Ellis ownership, Jantzen is just getting started in reclaiming its former market share, according to Jennifer Waycott, vice president of sales and marketing.

“It’s getting great reaction. We had the worst placement at Surf Expo in January 2020, and retailers had a hard time editing,” she said, of winning back department store accounts like Dillard’s and Sheels and Florida specialty stores Ron Jon, Lion’s Lair, and Cool Style the USA.

Other exhibitors did tremendous business during the pandemic. Elan’s Elan Savir said going full throttle with Zoom wholesale and launching e-commerce paid off. Despite not doing a single trade show in the shutdown, sales topped his best year, 2019.

“People flooded places that were open like Miami. My Aruba client said the hotels are maxed out there this July,” he said.

“We cater to those in-between preppy lines like La Plage and Lola Australia that are a side step from boho,” she said, completing outfits with Beck’s pebbled leather bags and Soléi Sea’s flip-flops. “We give them one-stop shopping.”

The scene at Cabana, which took place in the convention center from July 10 to 12, also differed from previous years. Scaled back from 300 vendors, 170 brands exhibited in the COVID-19-minded layout with wider aisles and spacious common areas. Unless they had U.S. representation, most of the resort labels from far-flung locales that give the show its curated cachet weren’t present.

“From the very beginning, I told everyone that this would be a domestic show,” said cofounder Janet Wong, who elevated spirits with vegan ice cream in exotic flavors and European Wax Center’s pop-up. “VDM, a line from Australia, and Revolve’s buyers came last minute, and I heard there were retailers from Dubai, Singapore, and Turkey.”

Purvi Kanji, director for the Place showroom, which represents Acacia, said owner Naomi Acacia Newirth neither flew in from Hawaii nor hosted her usual runway show.

“We were nervous since we didn’t know what to expect, but we saw tons of our Northeast business and new accounts from Florida and the Southeast,” she said, citing Anthropologie, Land’s End, Moda Operandi, and Intermix as some of the bigger retailers that visited Cabana. “Buyers were eager to play with the product and get back on the show floor.”

From Washington D.C.-based Revel Rey’s suits with custom hardware including biomorphic shapes and bold buckles to Fort Lauderdale, Fla.-based Montce’s textured materials like chunky crochet and seersucker gingham, there was still a lot of standout product. Fresh lines were also in the mix. Franklin St.
Showroom brand manager Michelle Maslanka showed her own upstart, Sister Swim, for the first time in Miami, alongside mainstays like Vitamin A. Anonymous 213 showroom owner Eric Wheeler received 25 orders for the U.S. premiere of Kleed Kimonos from Peru.

“Swim may not have been the same size this year, but it was still vital to have a presence since buyers are out of sight, out of mind,” said Stein, who expects next year to be back on track. “If you could have been here and weren’t, you made the wrong decision.” Fall 2021 Women’s Contemporary Trend: Reworked Suiting for Back to the Office

5 Summer Date Outfits That Work For Any Occasion

‘Mini Me’ and Vibrant Tones: The Biggest Children’s Wear Trends at Pitti Bimbo