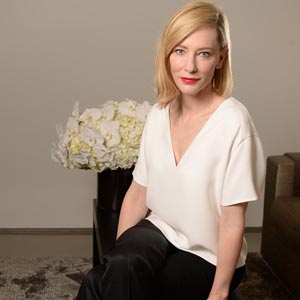 The Academy Award-winning actress chooses a different fragrance for each of her characters, immediately imbuing them with a sense of identity for her.

The Academy Award-winning actress chooses a different fragrance for each of her characters, immediately imbuing them with a sense of identity for her. “Jasmine smelled of fear and desperation and sweat,” Blanchett said of her role in Woody Allen’s “Blue Jasmine” that won her the Oscar for best actress. “When we were doing ‘The Maids,’ Isabel’s scent was Fracas. It wasn’t a scent that I personally would wear, but I wore it every night on stage. They’re never things that I would personally wear, because scents operate on such a psychological, aspirational, dreamlike part of ourselves. I think it’s another way of subtly shifting you into a different mind-set.” And, ideally for her, a slightly uncomfortable one. Blanchett, the face of Giorgio Armani’s women’s scent Sì, has won accolades for playing everything from a monarch to a CIA agent and more, and with almost every role the down-to-earth actress aims to push herself. She confesses she even felt insecure about how her role in “Blue Jasmine” would be received. “The script was one of the best scripts I’ve ever read you know, it’s Woody but I just felt that I’d fallen flat on my face. When we were shooting, Sally [Hawkins, a costar] and I kept saying, ‘It’s really nice to have known you on the deathbed of your career,’” Blanchett said with a laugh during an interview with WWD. Little did she know that later she would gather an armload of awards for the role. “All of that [awards] stuff was utterly delightful and bewildering to me it’s always a shock and a surprise.” Blanchett is one of only six actresses to win both best supporting actress and best actress Academy Awards, and she has been nominated for many more. So what went through her mind when her name was called this year as best actress? “You’re just so present in that moment, when they start reading the list of people out. You think, ‘Well, this is it, it’s going to go one way or another, and there’s a lot of scrutiny.’ I was intensely relieved and then intensely elated. As wonderful and as heady and as rewarding and exhilarating as it is to win an Academy Award, if you think you deserve it any more than any of those other women, or if you think you’ve arrived somewhere in particular, I think you’re having the wrong conversation with yourself. It’s more like, ‘What’s the next challenge?’” Despite the Oscar she picked up for “Blue Jasmine,” Blanchett brushes off the suggestion that she carried the film. “Look at who I was working alongside, and I don’t think it was a coincidence that every single actor there had theater bones. Bobby Cannavale, Sally [Hawkins], Alec [Baldwin] and Max Casella…everyone had theater bones. Andrew Dice Clay has terrifying comic bones. And I think that somehow Woody [Allen] wanted to harness that sense of ensemble. It was really an amazing bunch of people. We’d knock things out, throw ideas around it was a very, very intense shoot, but it was a very playful shoot. And I think it was because of those theater bones.” Allen was a key reason she wanted the role, added Blanchett. “When Woody Allen calls, or Martin Scorsese calls, or Ingmar Bergman, if he could call  you take that call, and you read it, and you read it with the knowledge of their body of work,” she said. “And I think the challenge when you read a Woody Allen script is that he is the guy who made ‘Interiors’ and ‘Bananas,’ so which way is this going to fall? And so the tonal thing is the challenge, and that’s the conversation that I was trying to have with him on a day-to-day basis: is ‘Where are we heading?’ But what I really relished about him is and the other actors is that we were finding it as we went along.” She particularly liked that Allen didn’t coddle his actors. “There’s not an ounce of preciousness in the way that he talks to himself about what he does or in the way he treats other actors,” Blanchett said. “He’s got a stand-up brutality to the work, which I found really refreshing. He warmed up — obviously Alec knew him, and Sally had worked with him once before briefly, but the rest of us hadn’t. Once he realized that the questions I was asking him weren’t just a basic question of ‘Do you like what I’m doing?’ but I was actually asking him genuine questions about the rhythm of a scene or was he going to cut to this moment from there, what was it being juxtaposed against, that they were pertinent, relevant questions worth answering, then we started to have a dialogue, and it was very rewarding. I find his frankness and the fact that he doesn’t treat actors with kid gloves refreshing, because somehow you become very infantilized in the film industry, and I think actors are much more robust.” Another creative partnership Blanchett treasures is that of her relationship with Giorgio Armani both this scent deal, in which she appears in the advertising for Sì, and his apparel. “I admired him from afar for so long you build a picture of what the person will be, almost an ivory tower,” said Blanchett. “When I first actually met him, he was fitting me for a dress backstage after a Privé show I think it was the first Privé show. He immediately put me at ease. He got down on the floor and started measuring my hemline. He didn’t have someone else do it, he did it himself. He was there "the great man" literally at my feet. It was a way of saying, in this moment you are the most important person. It was a profoundly generous thing for him to do. “He’s unique in the fact that he creates and designs not only garments, clothes but objects and atmospheres that have an intense strength and serenity to them,” she continued. “So he’s a master at harnessing that duality in that he’s able to create things that are easy and sensual to wear, but often for women he’ll harness masculine silhouettes. He’s a master tailor, but yet he has a gossamer quality and I do think as a human being he elevates every creative conversation he’s part of. For me to have been in creative dialogue with him over the last decade, I count as one of the great privileges of my career.” Armani has also been very supportive of the Sydney Theatre Company, for which Blanchett and husband Andrew Upton served as co-artistic directors from 2008 until the beginning of 2013. Upton now handles the role solo. “[Armani] designed a play that I directed and supported our endeavors, but he’s done wonderful things with scholarship and he’s been a wonderful mentor to so many, apart from what he does in an ongoing way with the house itself,” she said. “He’s got familial connections to the theater, so understands it’s a labor of love for everyone. He examined every costume that everyone was working on and commented and made suggestions. He took particular care with being very generous with the people in our workroom. It just made me love him more.”

Speaking of theater and acting, Blanchett points out that one of Australia’s biggest exports is its actors, something she and Upton realized when they took the theater duties on. “We were so proud of the work that was being done in Australia and we felt that there wasn’t enough national pride in the work that was going on and ironically, or sadly, the work needs to go out internationally. In order to get traction in Canberra, our nation’s capital, you need to go to Washington, D.C. I found that entering into that soft diplomacy that you get traction domestically by going out internationally — was a very interesting process for me personally. It was a learning curve for me to see the way real political conversations start, in terms of how one can advance culture.”