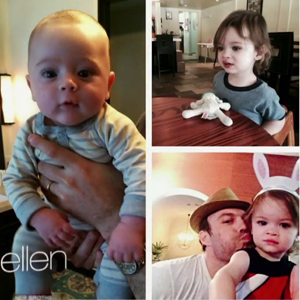 Megan Fox shares photos of sons on 'Ellen,' says she was 'on the verge of vomitingâ€™ while filming 'Ninja Turtles' pregnant. The 27-year-old introduced the world to her youngest son Bodhi on Friday.

Appearing on The Ellen DeGeneres Show on Monday, Megan showed off a picture of the two-month-old and also snaps of her older son Noah, who is 19 months. Until now, the actress and her husband Brian Austin Green have kept the little boy under wraps but the Transformers’ actress could help but show off the baby.

The Teenage Mutant Ninja Turtles star, 27, looking tan and gorgeous during her sit-down chat with DeGeneres, gushed over her precious kids as images of the boys flashed across the screen. "Yeah!!!" Fox yelped as her baby boys’ images appeared. "Bodhi is the little chubby one and then Noah is the one with the lips."

Fox and husband Brian Austin Green welcomed their second child, Bodhi, back in February. "No wonder you just keep having children," DeGeneres remarked as she marveled over the pics. "Beautiful kids." (Fox and Green did not release any images of their son Noah after he was born in September 2012, though she still described his physical attributes in a December 2012 interview with DeGeneres. "He looks, I would say, 70 percent like Brian," the first-time mom told DeGeneres then.) Megan Fox gushes about her two sons with Brian Austin Green: ‘Bodhi is the little chubby one, and then Noah is the one with the lips.’

DeGeneres asked the star on Monday, "How are you able to work? What were you doing when (you were pregnant)? Were you shooting the movie?" "I was," Fox responded. "I got pregnant with Bodhi two weeks into filming Ninja Turtles, which is an action movie and requires a lot of running and jumping and stunts." the Transformers star added, "Anyone that’s been pregnant knows your first trimester can be pretty rough and you’re nauseous all day long. So I spent the whole shoot basically (sick)." Megan Fox and Brian Austin Green have three sons together.

Fox explained, "The producers would come see me in the morning in the makeup trailer and I would be clinging to a box of saltines and we had kept pickles in the refrigerator for me. I was just constantly on the verge of vomiting." The star added that her upcoming role as reporter April O’Neil involves "running, jumping, fighting" and "saying things like, ‘Show me what you got, Shredder!‘"

"So clearly it was not planned," DeGeneres remarked of Fox’s second pregnancy overlapping with filming. "The first one wasn’t planned either," Fox said, joking: "I mean, we can’t let Brian near me anymore."

Cate Blanchett on Acting and Armani