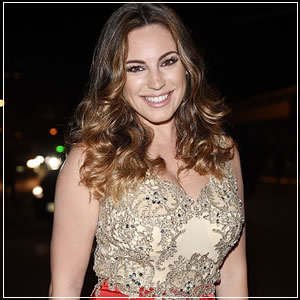 All the stars are out in force at the 68th annual Cannes Film Festival – and Brit Kelly Brook has been making the most of the glitzy celebrations.

The 35-year-old looked incredible in a two-tone embellished fishtail gown as she made her way to the glamorous Chopard party along with socialite pal Hofit Golan.

Kelly showed off her curves in her outfit which consisted of a figure-hugging top section which had a a lace detail and a red satin skirt section which clung to her slim physique.

It’s been all go for Kelly, who after hearing that her show One Big Happy was not going to be renewed, treated herself to a sunshine break to Bodrum, Turkey, ahead of Cannes.

On Monday, Kelly posted a rather chic picture of herself making her way to the French hotspot, writing: ‘Bonjour, Cannes.’ She was wearing a boucle style linen dress and matching jacket for the occasion as she touched down, teamed with designer loafers and a cream leather quilted Chanel bag.

Kelly is a regular attendee at Cannes, attending in both capacities as a model, actress or just to party. With her TV career apparently on hold for now, Kelly is looking forward to the release of her new British comedy Taking Stock, which sees her in the lead role. From writer/director Maeve Murphy, the film tells the story of Kelly’s character Kate, a retail worker whose world falls apart when her boyfriend dumps her and the shop she works in goes into liquidation. Without a job, Kelly hatches a plan to rob the store she works in on their last day of trading, but in typical fashion, things don’t end up as planned.

Speaking about the film when she shot it back in 2013, she said: ‘It is so important that we continue to support British filmmaking and Maeve has written one of the best scripts I’ve read in a long time.’