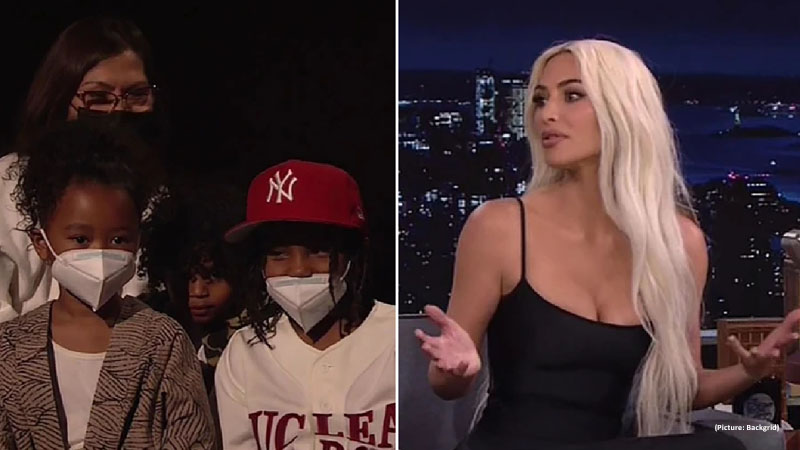 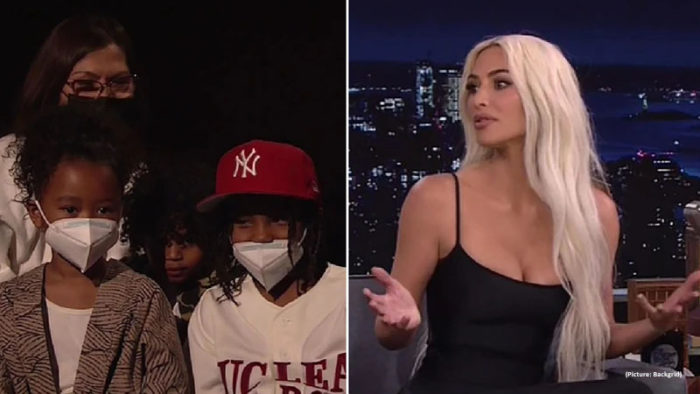 Kim Kardashian was forced to halt her interview on the Tonight Show With Jimmy Fallon on two occasions after being interrupted by her kids on Tuesday.

The businesswoman from Skims took her two sons, Psalm, age three, and Saint, age six, along with a family friend’s daughter to watch the play. Even though mother Kim admitted that she had never watched a Saturday Night Live episode before going on the show, the kids were soon causing chaos.

Kim soon found herself having to stop her discussion with host Jimmy to tell her kids to be quiet, as Metro reported. ‘Guys, can you stop? This is your first time at work with me, please,’ she urged them.

‘My two boys are here and I hear them making so much noise,’ Kim then explained to the audience. ‘Guys, this is your first time at work with me, don’t mess this up, come on!’

The mother of four made an effort to resume her conversation with Jimmy, but as soon as they did, she was forced to order them to be quiet. ‘Guys, seriously,’ Kim snapped. ‘You gotta go!’

Psalm was then taken from the studio due to his loud behavior. Kim said in another part of her interview on The Tonight Show Starring Jimmy Fallon that she and her boyfriend Pete Davidson had a “skincare bond.”

Kim also shared the exact moment she realized her relationship with Davidson was “special.” ‘I fell asleep and I kept on talking about it all night, like, “Oh, my God. I have this pimple, I have this pimple don’t let me fall asleep I have to put pimple medicine on it before I go to sleep.” ‘I fell asleep, forgot, woke up in the morning with dried pimple medicine on my face.’