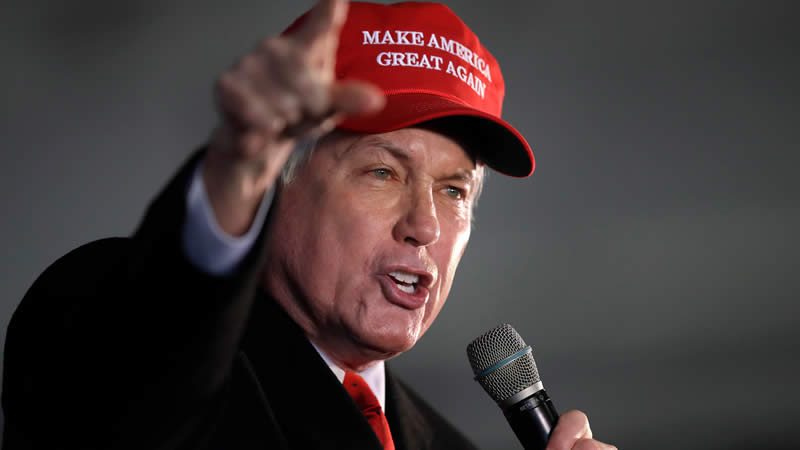 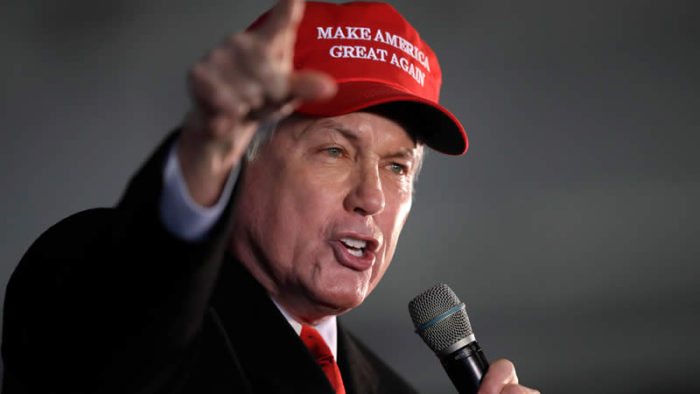 We are living in an age where a frighteningly large percentage of the populace is embracing fascism and not even knowing it.

They have been blindsided into thinking that in voting for Trump they’re voting for a return to some idyllic former time, which in truth never existed, and that that can be achieved if they can only keep that one person in power forever, yes that one, the one who says he’ll Make America Great Again. It has to be Trump. The fact that all of American history shows that presidents come and go, beloved or hated, and that that is our strength, doesn’t impact them. They want to live in a fascist regime under the auspices of Mango Mussolini, currently in exile in his Mar-a-Lago, marmalade mansion.

Therefore, it comes as little surprise, that Lin Bat$hit Wood is characterizing the 2020 election as not an election at all, but as a “color revolution.” It was a talking point last September and Lin Wood dragged it out again yesterday. YaHoo News:

Fox News and other conservative media began circulating a new talking point last week [second week of September, 2020] in the ongoing effort to sow doubt about the upcoming presidential election, warning that Democratic operatives and government insiders are plotting a “color revolution” to overthrow Trump in November.

“Color revolutions” is the term used for popular uprisings against authoritarian regimes, such as those that took place in former Soviet countries such as Ukraine and Georgia in the early and mid-2000s. Though it’s likely an unfamiliar term for most Americans, the recent warnings from Trump allies about an American color revolution set off alarm bells for some experts on the topic.

“Of all the Kremlin talking points these guys have recycled, I didn’t think I’d ever see this one picked up. I was wrong,” tweeted Michael Carpenter, senior director of the Biden Center for Diplomacy and Global Engagement at the University of Pennsylvania.

“Russian President Vladimir Putin and Chinese President Xi Jinping harbor deep fears of ‘color revolution’ and consequently their regimes are laser-focused on repressing spontaneous popular protests,” Carpenter, who previously served in the Pentagon as a deputy assistant secretary of defense focusing on Russia and the surrounding region, wrote in a message to Yahoo News. “That’s why it’s so jarring, even chilling, to hear fears of color revolution being articulated in the U.S. context.”

Here’s Lin Wood doing that very thing, articulating it in the U.S. context — as if Trump had some absolute right to be in power and the only way to get him out of power was by a revolution. That’s the scary part about this. Why are we even discussing this in a democracy?

Lin Wood states that there was a color revolution instead of an election and that he believes “they’re going to take our country by force.” He then states “when this is over, Donald Trump will be on Mount Rushmore.” pic.twitter.com/HiXBfLOeKo

I’m all for Trump being on Mt. Rushmore. There’s nothing I want to see more. I say we drop him off by helicopter, with a sleeping bag, a six pack of Diet Coke, a few Happy Meals, his phone, so he can play with his toy blog, and we leave him there. Think of it as the ending to a Twilight Zone episode: the worst president in history who wanted nothing more than to be on Mt. Rushmore and so he calls upon the powers of darkness to help him out. Remember the episode with Julie Newmar, where she had devil’s horns? That’s how we do it, “Yes, Donald, we grant your wish to be on Mt. Rushmore. We agree that’s where you belong. Even your enemies agree.”

And you know I’m going to tell you that there are QAnon Qrazies who believe all of this.

Is your source Lin Wood? pic.twitter.com/3jZc01WBL5

And don’t forget the Insurrection Act, signed in secret. Yep, the military is in charge, just waiting for the order to nuke San Francisco and melt all of Nancy Pelosi’s ice cream, whatever. Maybe Baskin Robbins can come up with a new flavor afterwards, Raspberry Radiation? Ya spose?

Lin Wood states that Trump is still the president and that the military would call on him “for the code if they need a first strike.” He also states he believes Trump signed the Insurrection Act in secret. pic.twitter.com/8eA5e1VPER

I wonder how those folks over at American Renewal are doing? These are the Republicans they need to win over to the cause of sanity and truth. We wish them our very best. They have their work cut out for them.