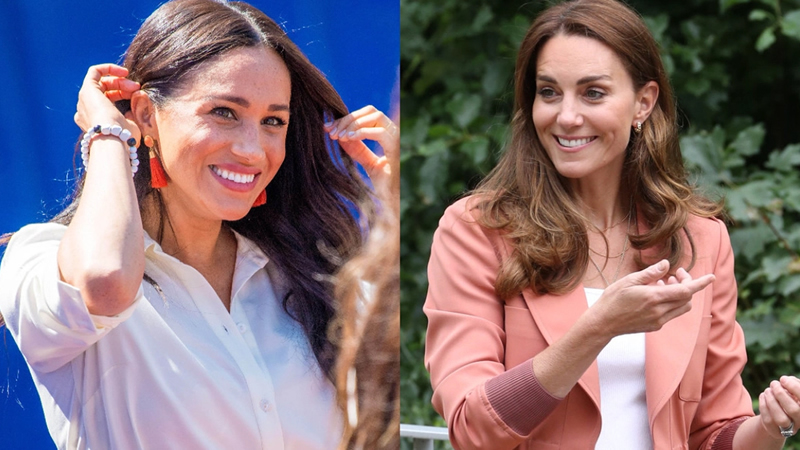 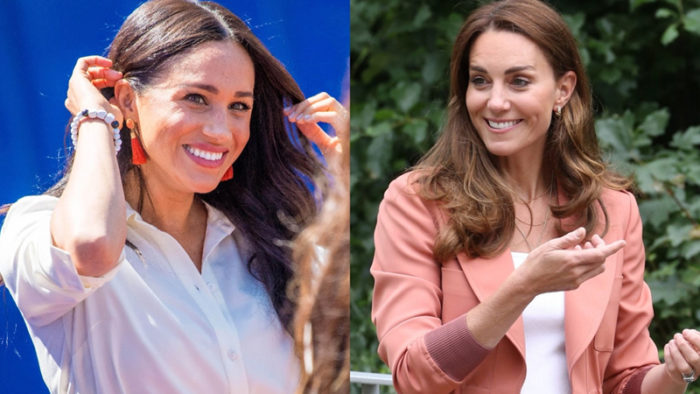 From tiaras at state events to a casual bracelet at a family gathering, Meghan and Kate know how to choose their gems to flatter their appearances rather than steal the spotlight!

Kate Middleton Turns Monogrammed Necklace Into Style Message
Recently, Kate visited Ireland. Changing her outfit in a physiotherapist’s office, Middleton discovered that the health care worker had left her a gift of a necklace and earrings from her own small business, All The Falling Stars.

That physiotherapist, Aisling O’Brien, designed and created the jewelry. And the necklace contained special meaning for Kate, Aisling told Town and Country.

Middleton and her husband Prince William adore their three children: Louis, Charlotte, and George. As a result, O’Brien made the necklace with the initials of the two little princesses and the princess.

And thus each time Kate wears her necklace, she sends a secret message to her royal children. How much does Middleton adore that style of symbolism?

O’Brien revealed that the Duchess of Cambridge has donned the necklace and matching earrings repeatedly. The jewelry designer now gets orders from all over the world.

Thinking about what Kate’s love for that necklace has meant to her, O’Brien shared that she feels “blessed.”

And she pointed out what Middleton has done for Aisling.

“The fact that Kate Middleton, even though she has every piece of jewelry in the world, has gone to her jewelry box—or wherever she gets her jewelry from—multiple times and picked out those two things to wear on different occasions together and separately, it blows my mind completely. I just I can’t get my head around it.” Meghan Markle Uses Necklace Fashions To Hint At Royal Romance
But Kate Middleton does not rank as the first royal family member to use jewelry to send a secret message!

Meghan Markle actually began using a necklace with initials for this purpose even before she became the Duchess of Sussex by marrying Prince Harry!

Way back when her romance with Harry consisted only of rumors, sharp-eyed royal family fashion watchers noted that Meghan had donned a necklace with two initials: “M” and “H”!

Later, when Markle wore the same necklace to the 2018 Invictus Games, those same style observers confirmed that she had used the initials to confirm the romance!

Since then, Meghan has chosen to wear that necklace multiple times. And the Duchess of Sussex hasn’t stopped with that single adornment.

Markle also has been seen sporting other monogrammed necklaces, all of which contain the same symbols.

For example, when the Duchess of Sussex attended the U.S. Open to watch her BFF Serena Williams serve up winning strokes, fans noted that she wore a monogrammed necklace.

Although Kate and Meghan have clashed recently over claims that one woman made the other cry prior to Markle’s wedding, the two actually have much in common with their love of monogrammed necklaces. Could that shared fondness be the start of a beautiful royal friendship.

'Monica Geller' Is Back In Kitchen: Courteney Cox Shares Video Of Cooking 'Under Pressure'