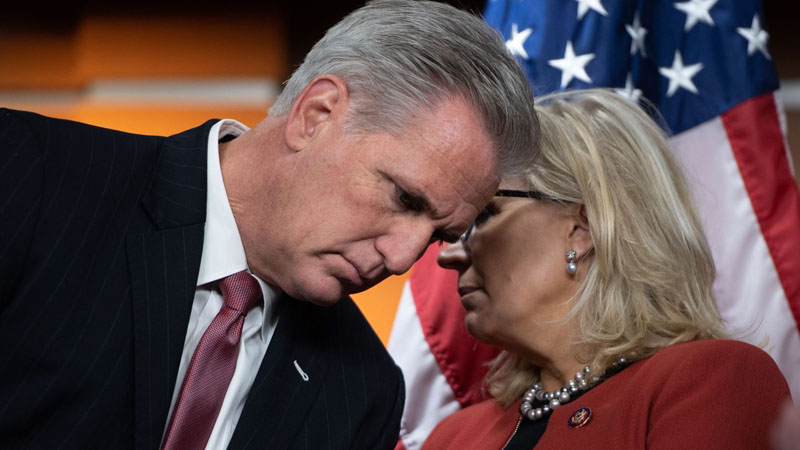 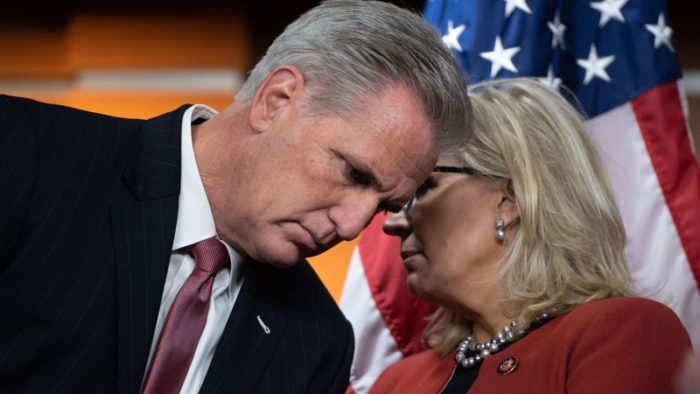 Yes, I know, my mind works in sick and twisted ways. But that’s because in all of my years as a total political junkie, I’ve seen some pretty sick and twisted shit. And for better or worse, you can’t just cut that shit off, it’s called experience.

I have watched this entire 3 Stooges Liz Cheney pie fight with great interest, but have also remembered to take the occasional step back to try to look at things with a slightly wider lens, look for collateral damage as it were. And as I’ve picked through some what appear at first glance to be unrelated stories, I’m seeing some pieces begin to kind of silently click into place.

For instance, I wrote a couple of days ago about how when the House GOP caucus held their annual retreat, they shared some internal polling that showed that the GOP was extremely competitive in the vast majority of battleground swing districts that the GOP was going to have to flip or retain in order to take back the House in 2022.

There’s just one problem, they didn’t tell the caucus that the same polling showed that former President Trump was 15 points underwater in almost every one of those districts. In other words, the secret to success in those districts was to keep Donald Trump’s name as far away from them as possible.

You know, the same one everybody is busy swearing fealty oaths to? And here’s the kicker. As a member of senior leadership, Liz Cheney knew it! And she said nothing. Why not? If you’re going to fight for your post, why not spill the beans, and let the caucus have at McCarthy for his chickenshit duplicity?

My guess? Because Cheney already understood that by her lonesome, this was a lost cause. Cheney would spill the beans, McCarthy would make soothing goo-goo noises about Cheney misreading the data, and she’d still be out of her leadership position.

Now she’s free and unfettered, and it turns out that a free and unfettered Liz Cheney is a fearsome and beautiful thing to see! In her post ousting remarks to the media today, she castigated her chicken caucus members for being spineless, and then said that she was taking the mantle of bringing integrity to the GOP.

She went on to say that she would do anything in her power to keep Donald Trump as far away from the Oval Office as possible. That wasn’t for the media. That was a direct, leather-glove-slap-across-the-chops-challenge to Donald Trump. Bring it on, big boy!

Remember, you’re talking about Liz freakin’ Cheney here! Her entire life has been spent working in GOP politics as a member of a political family that is legend for it’s walk-the-razors-edge politics.

For Gods sake, her own father took basically a phone in the Vice President’s job, and turned it into a shadow Presidency. Pitting someone with her skills against a political ignoramus like Trump would be cruel and unusual punishment if he wasn’t such an existential threat to democracy.

She’s. seen. the. internal. polling. data. That is critical, because Liz Cheney can read those things the way that fans read the box scores on the sports page. Remember Quisling Kevin McCarthy’s entire justification for doc king Cheney from management in the first place.

Cheney keeps wanting to talk about The Big Lie, and January 6th, and with that polling data, the GOP House caucus wants to kiss Trump’s on the quiet, and then pivot over to the stolen 2020 election, voter security, and culture wars to excite Trump’s base without pissing off white suburban women voters. That’s really the only way to try to keep the anti Trump sentiment out there from swamping the GOP vote in 2022.

Cheney can keep that from happening. After all, she’s still a sitting member of congress, and as hot as a griddle, pretty much every non FUX, Newsmax microphone can be hers. And the cavalry is coming. By the weekend, an organization of 100+ former GOP power players such as former MOC’s, Governors, GOP cabinet members, and senior administrators are going to release a manifesto as a principled conservative resistance to Trump.

They are making demands that the current GOP take certain, return to reality based world steps that they must undertake most riki-tik,  or the group will form an alternate party to run against GOP state legislative slates as well as statewide federal seats in 2022.

Think about it! There is nothing more guaranteed to drive Trump absolutely insane than a direct challenge to his superiority and authority. Never in history has there been an alleged politician more piss poorly qualified to deal with a challenge to his power and authority than Trump. All these people have to do is to push the button every few days, and Trump will continue to escalate.

But here’s the nut. As Trump is challenged, and as he is incapable of, as he sees it, properly defend himself, he will turn to his faithful GOP House sycophants to get out there in front of the microphones, and carry the banner. And put themselves squarely in the crosshairs of the very white, suburban, women swing voters where Trump is already 15 points underwater!

Of course I could be wrong. But Liz Cheney is a lifetime GOP political creature, and she can eat puny sniveling toads like Kevin McCarthy for breakfast. From where I’m sitting, she could see this coming when she made her initial stand, and cast her impeachment vote. She didn’t do it with the thought of going out in some pathetic futility two years later. She has an end game, and Kevin McCarthy had better gird his loins.

Prince Harry rebukes Charles and ‘cycle’ of bad royal parenting: He ‘treated me the way he was treated’