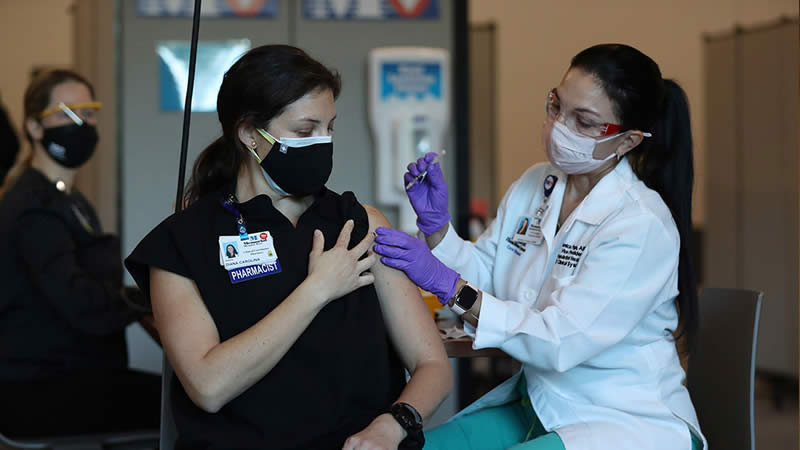 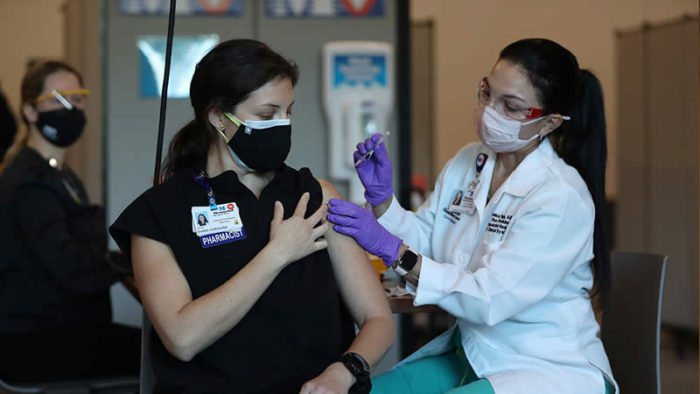 Breakthrough infections are exceedingly rare. But by tracking them, researchers can uncover viral variants that manage to dodge the immune response

Tens of millions of people in the United States have now been fully vaccinated against covid-19. These people are seeing friends, eating out, and—in rare cases—getting infected.

But we shouldn’t panic: these kinds of “breakthrough infections” are entirely expected with any mass vaccine rollout.

According to new figures released by the Centers for Disease Control and Prevention, more than 87 million people had been vaccinated in the US as of April 20. Of those, 7,157—0.008%—went on to become infected with SARS-CoV-2. The true number is likely to be slightly higher because mild or asymptomatic infections might be missed or go unreported. But the data are still encouraging. Only a tiny fraction of vaccinated people became infected and an even tinier fraction developed serious illness: just 331 were hospitalized for covid-19, and 77 died of the disease.

New studies published last week show that even in high-risk settings like nursing homes, these breakthrough infections seem to be rare. And when infections do occur, symptoms tend to be nonexistent or mild. What’s more, vaccinated individuals who become infected have lower viral loads than unvaccinated people—meaning they are less likely to transmit the virus.

Still, it’s important to keep monitoring breakthrough infections. All the existing covid-19 vaccines prime the immune system to recognize the spike proteins on the virus’s surface so that when the system encounters the real pathogen, it can fight back quickly. But if the body doesn’t mount a strong immune response to the shot, it won’t be ready to fight the virus. In other cases, the pathogen may have evolved enough to evade the body’s prepared immune response, and the vaccine won’t work as well. This is called immune escape.

Some researchers studying SARS-CoV-2 worry that with so much virus still circulating globally, the virus will have plenty of chances to hit on a winning combination of mutations that allow it to evade the immune response prompted by the vaccine. Tracking breakthrough infections could help them spot worrisome new variants and identify when vaccines are becoming less effective. This might help determine when booster shots are needed or point to more effective vaccine designs.
High-risk environments

People who work and live in nursing homes were among the first to be offered the covid-19 vaccine, and some of the first to benefit. Between late December and late March, case numbers in these facilities dropped by 96%. Nursing homes are ideal places for pathogens to spread and cause harm, and vaccines may not work as well because older people’s bodies typically mount a weaker immune response. Even influenza outbreaks can be deadly in these facilities. But the CDC found few breakthrough covid infections.

In one study, researchers analyzed infections in 78 Chicago nursing homes with nearly 8,000 vaccinated residents and 7,000 vaccinated staff. They found more than 600 coronavirus infections, but only 22 of those occurred in fully vaccinated individuals, 12 in residents and 10 in staff. Fourteen were asymptomatic and five caused only mild symptoms. When the team examined specimens from seven of the people with breakthrough infections, they found low levels of the virus. And none of the initial infections led to additional cases, suggesting that these vaccinated people didn’t spread the virus.

And when outbreaks do occur, the vaccines still provide good protection. A second CDC study examined an outbreak in a Kentucky nursing home where just half the staff were fully vaccinated. The outbreak, which began with an unvaccinated staff member, led to 46 covid-19 infections. Out of 71 vaccinated residents, 18 (25%) became infected, two were hospitalized, and one died. The staff fared better. Of the 56 vaccinated employees, four (7%) became infected. Most of those infections were asymptomatic. Only 6.3% of the residents and staff who had been vaccinated developed symptoms, compared with 32% of unvaccinated individuals.

During a nursing home outbreak, “staff and residents are continuously encountering the SARS-CoV-2 pathogen over and over again,” says Meagan Fitzpatrick, who models infectious diseases at the University of Maryland School of Medicine. So seeing such a small number of infections in this type of setting is encouraging.
Tracking the variants

New studies also hint that variants may be to blame for some of these breakthrough infections. Viral variants are “one of the wild cards,” said Anthony Fauci, chief medical advisor to the president of the United States, in a briefing on April 12. Though there is little real-world data, lab studies suggest that at least some of the variants are less susceptible to vaccine-induced antibodies than the original SARS-CoV-2.

In the Kentucky study, the researchers found that the outbreak was fueled by a variant known as R1, which had not previously been identified in the state. This virus had several important mutations that had also been identified in other variants. For example, the E484K mutation, also found in the B.1.351 variant first identified in South Africa, seems to help the virus evade the antibody response. And the D614G mutation might increase transmissibility. The authors note that although vaccination decreased the likelihood of infection and symptomatic disease, the virus still managed to infect more than a quarter of vaccinated residents and about 7% of the staff. That suggests the vaccine might not work as well against this variant, but the authors caution that the study was small. (The authors of the Chicago study didn’t sequence the virus.)

A New England Journal of Medicine study tracked infections in staff at Rockefeller University in New York. Between January 21 and March 17, the researchers tested 417 employees who had received a full course of the Pfizer or Moderna vaccine. Two women tested positive. When the researchers sequenced the viruses, they found that each was a slightly different variant, and these weren’t exact matches for any that had been previously identified.

When a breakthrough infection occurs, the assumption is that the patient failed to mount a strong immune response to the vaccine, Darnell says. But that didn’t seem to be the case with this woman. Darnell managed to get a blood sample soon after she tested positive. He and his colleagues found high levels of antibodies able to neutralize SARS-CoV-2. Because she was newly infected, the antibody response was likely due to vaccination, not her recent infection. Antibodies take some time to develop.

Why her immune system didn’t protect her from infection isn’t entirely clear, but one possibility is that the variant managed to dodge her response. “For this particular patient, that’s probably the best explanation for what we saw,” says Stephen Kissler, an epidemiologist at of Harvard’s T.H. Chan School of Public Health. “It’s not surprising to me that a lot of these breakthrough infections that we’re seeing are from variants,” he adds. As more and more people get vaccinated, “there’s an evolutionary selection pressure that’s being applied.”

On the other hand, as more people get vaccinated, we’ll see fewer infections and the virus will have fewer opportunities to mutate. And Fitzpatrick points out that even if immune escape explains the woman’s infection, it’s just a single case. And there’s no evidence that she passed the infection to others who also had been vaccinated. The phenomenon is worthy of future studies, but “I don’t yet see this as alarming,” she says. “There’s not yet a public health crisis.”

And even when breakthrough infections occur, it doesn’t necessarily mean the vaccine has failed, says Monica Gandhi, an infectious disease doctor at the University of California, San Francisco. Antibodies are only part of the immune response. T cells play a huge role too, by ramping up other parts of the immune system and clearing out the virus once it has infiltrated the body. They don’t prevent infection, but they can curb the virus’s spread. And some research suggests that the body’s T cell response will be much tougher to evade. “You may actually get a mild infection, but hopefully you’ll still have protection against severe disease,” Gandhi says.

Still, it’s important to track breakthrough infections to look for unexpected changes. A rising number of infections in vaccinated people might mean waning immunity or the emergence of a new variant that can dodge the immune response. The vaccines might need to be tweaked, and we might need booster shots. But over time, “our bodies will develop a more complete immune response,” Kissler says. “And even if we do get reinfected, we’ll be protected from the most severe outcomes. In the long term, the outlook is good.”