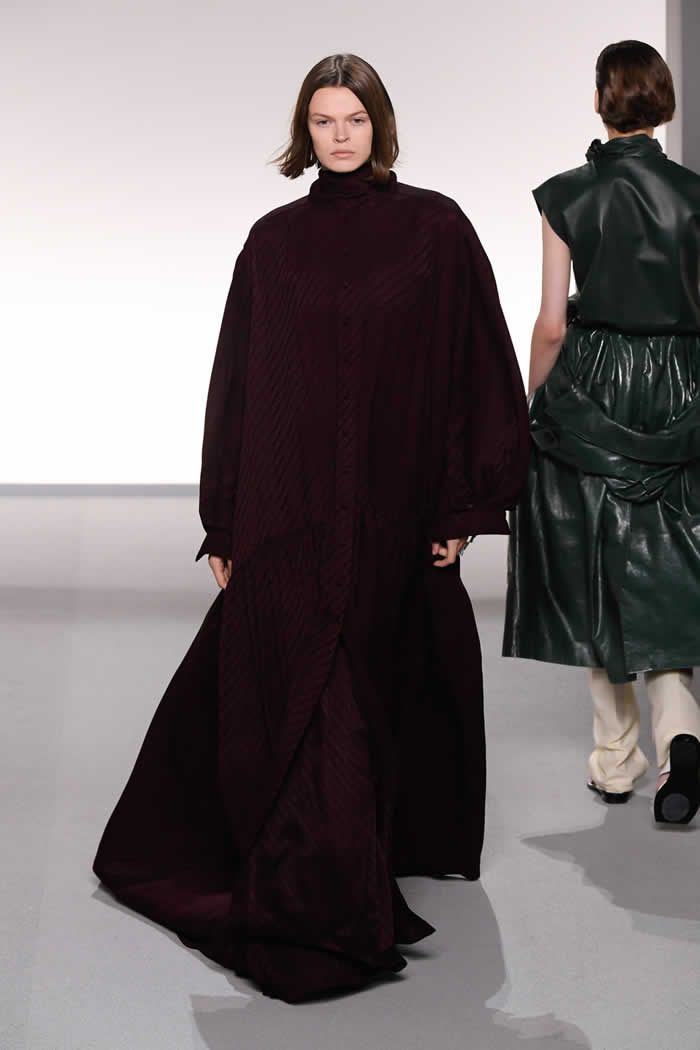 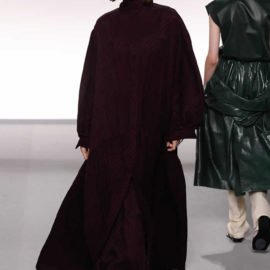 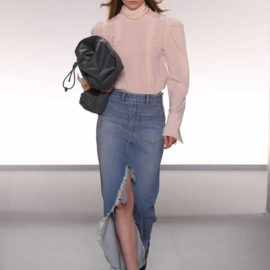 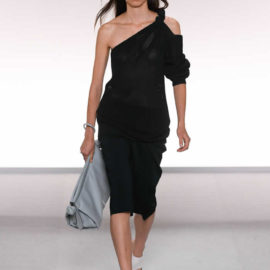 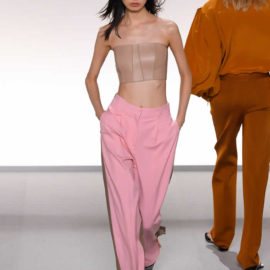 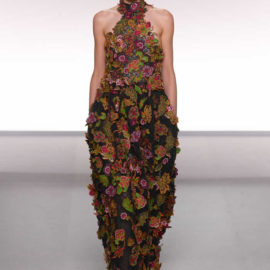 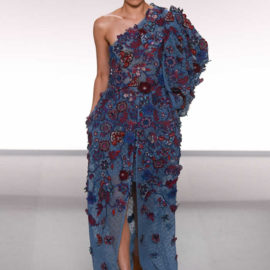 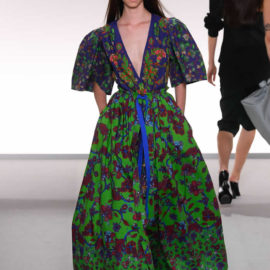 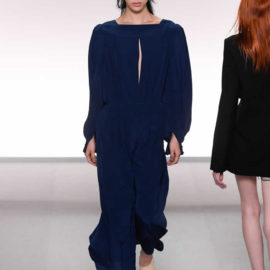 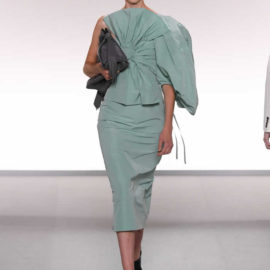 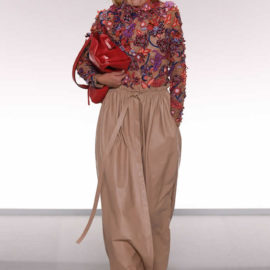 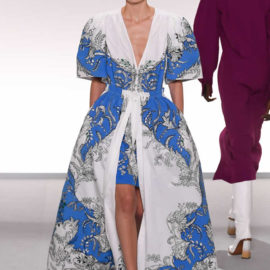 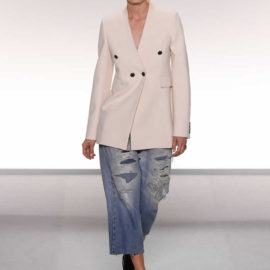 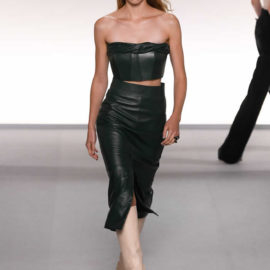 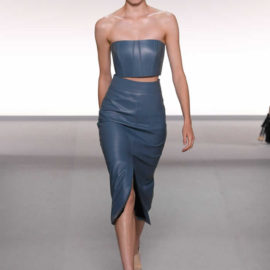 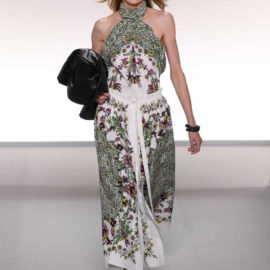 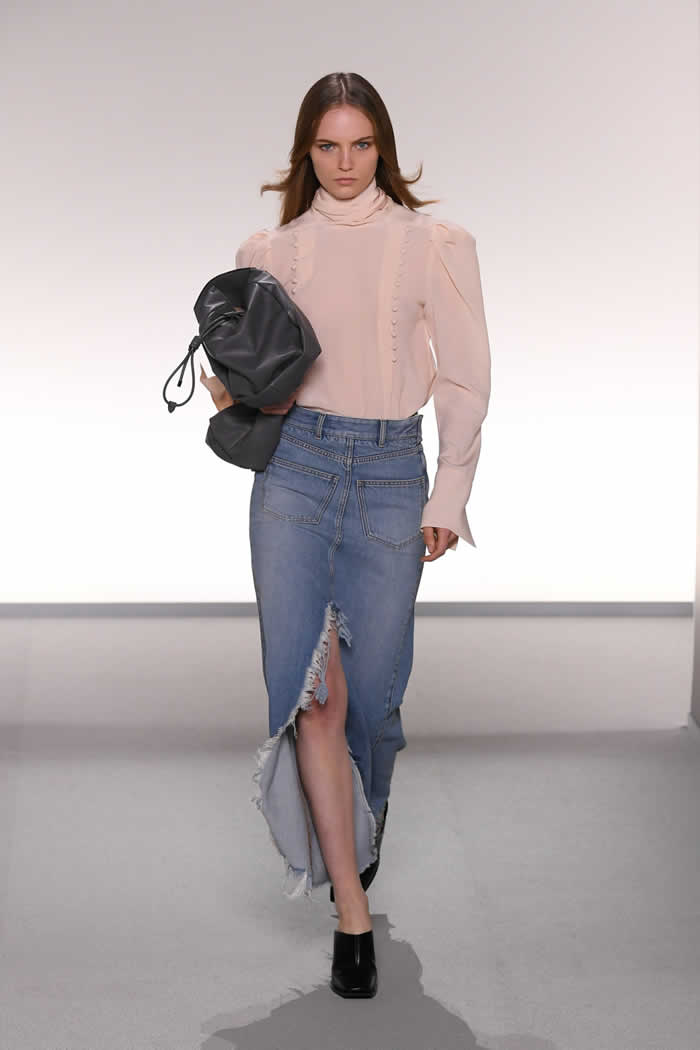 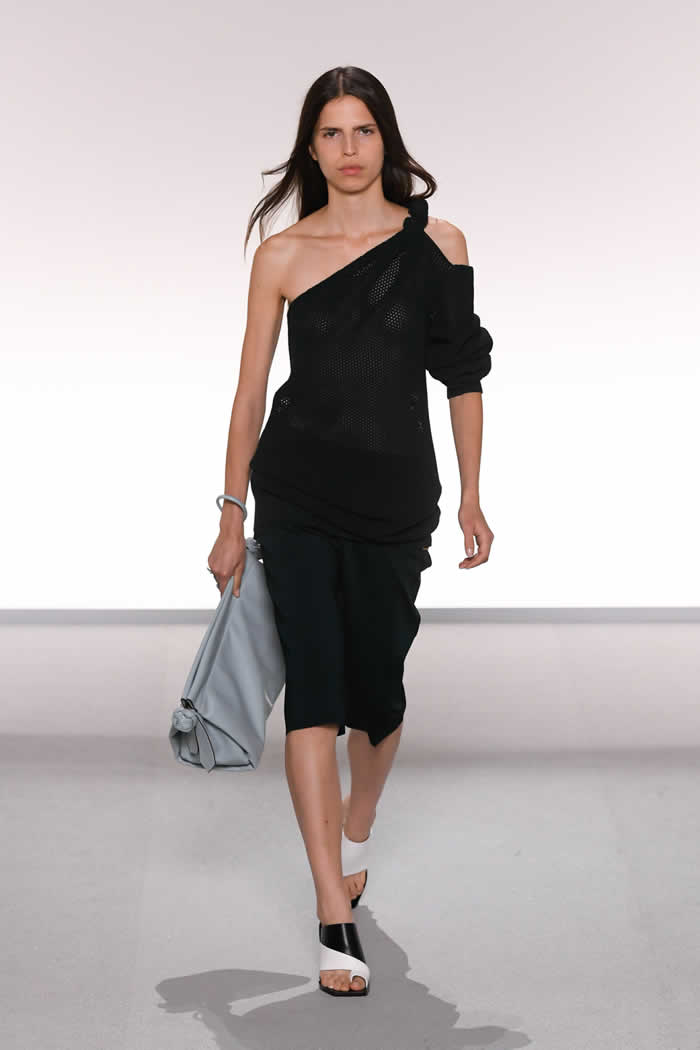 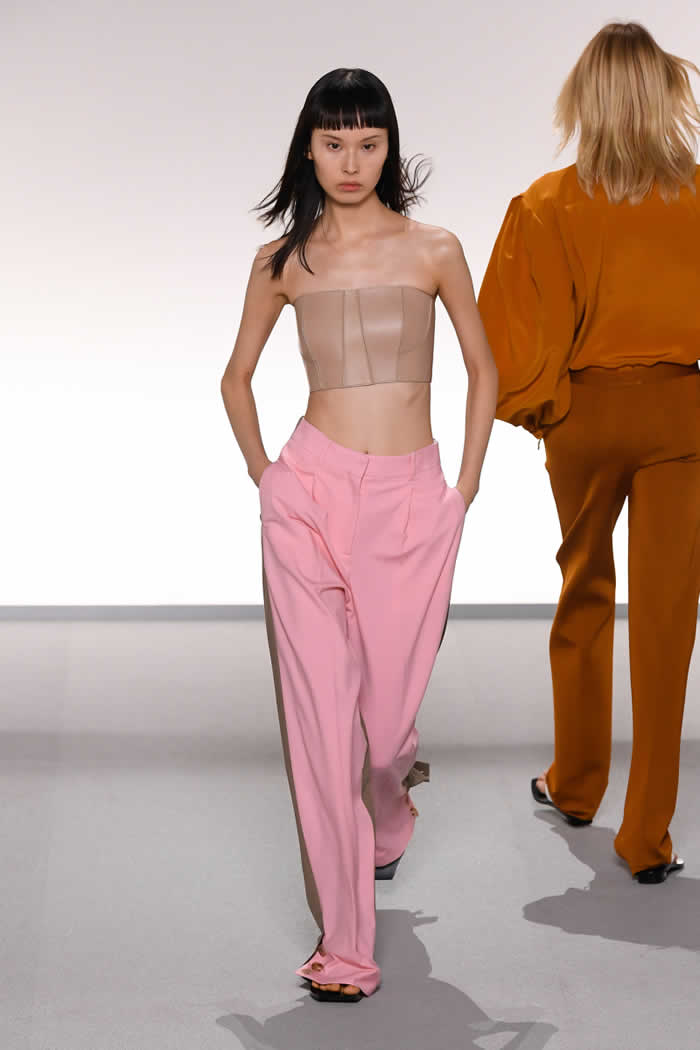 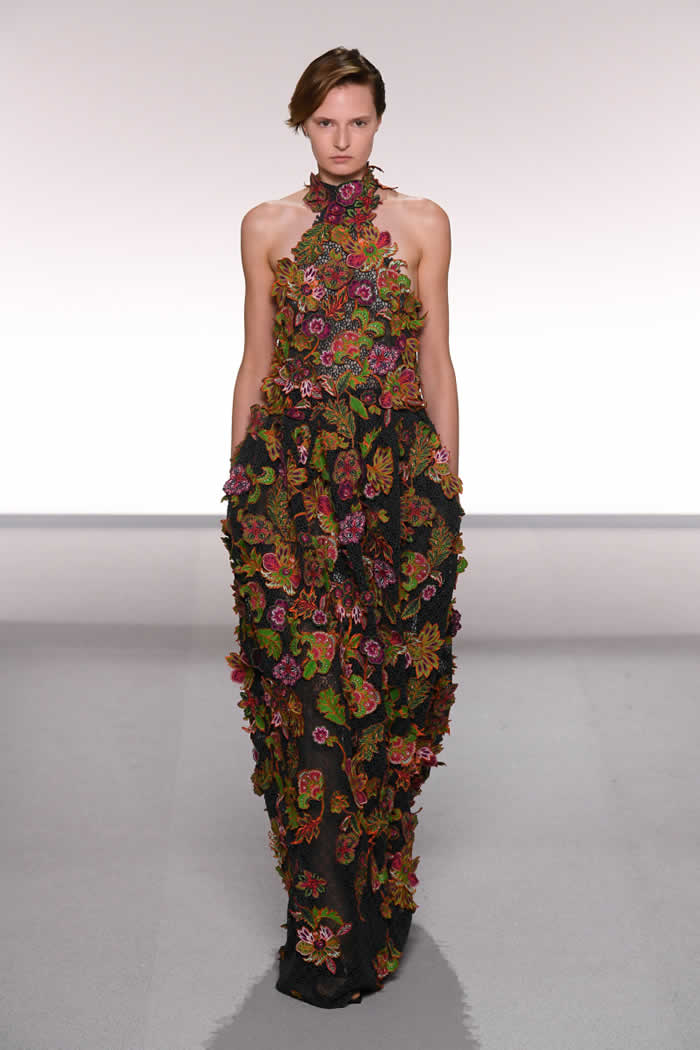 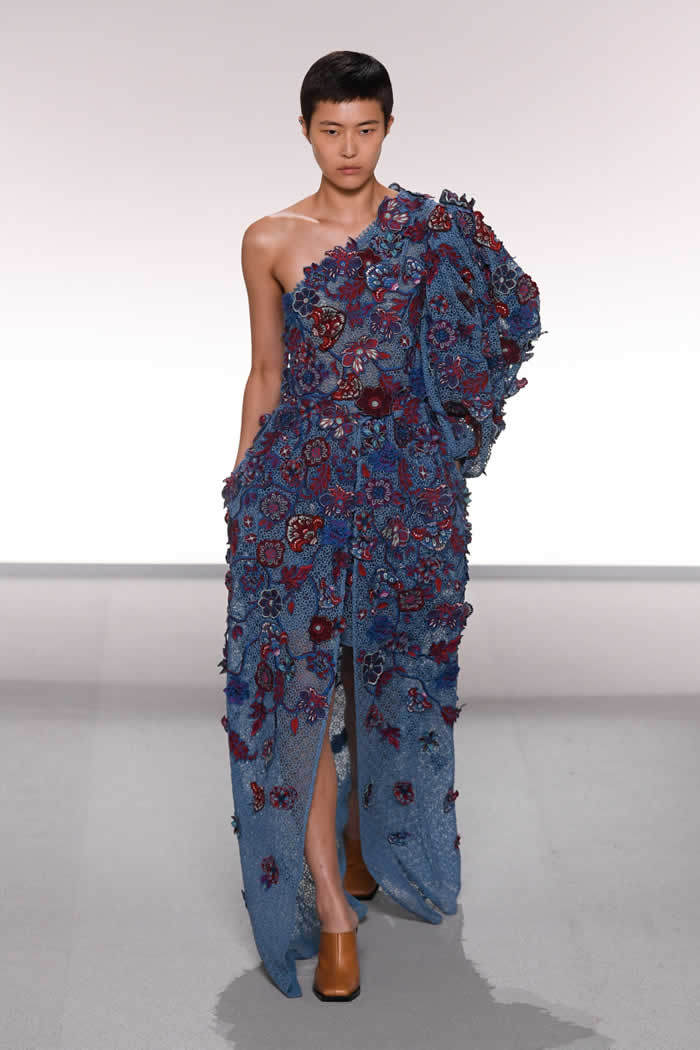 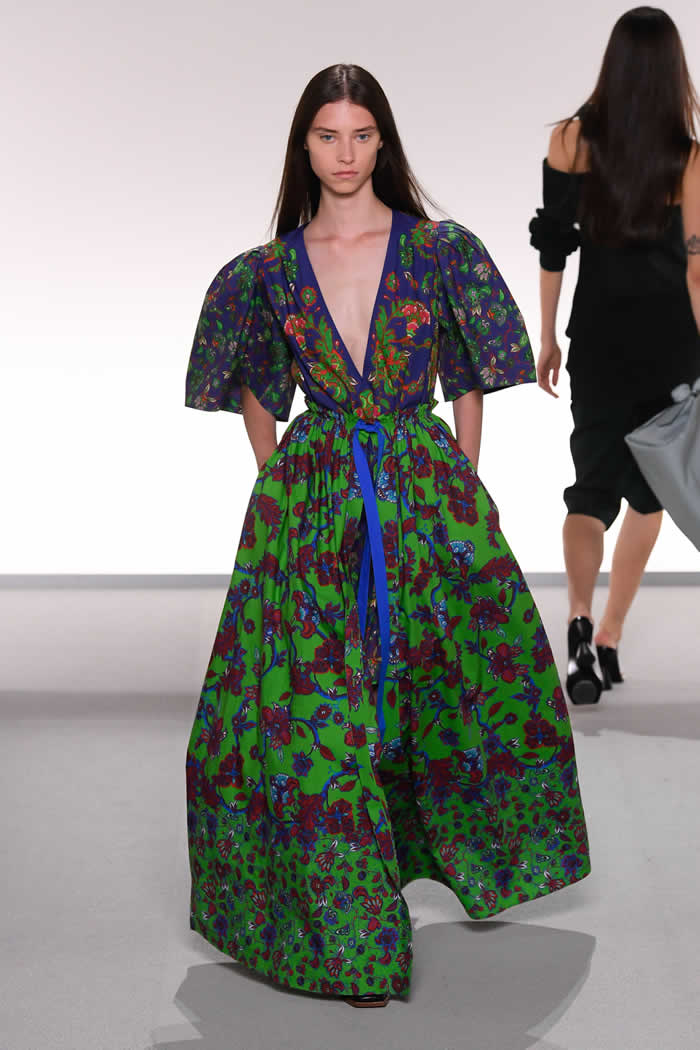 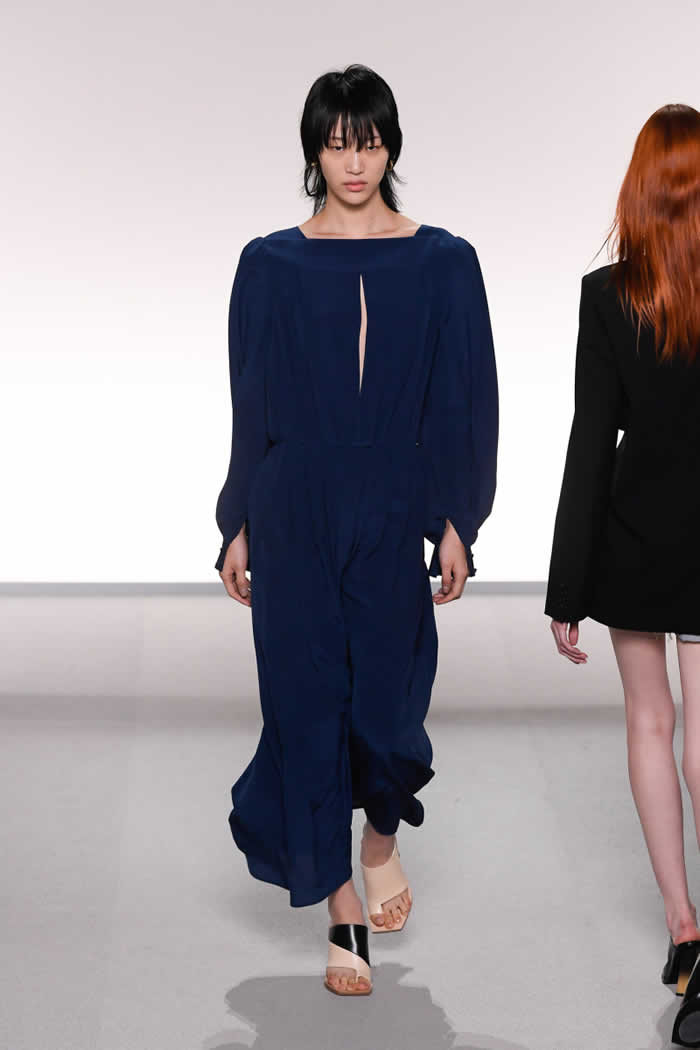 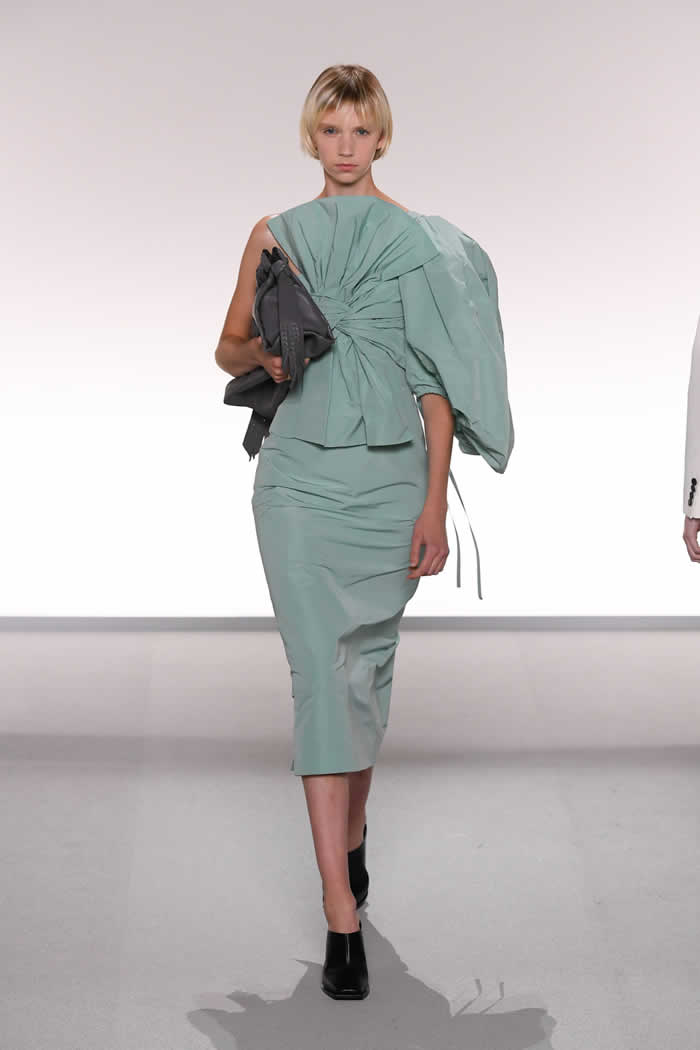 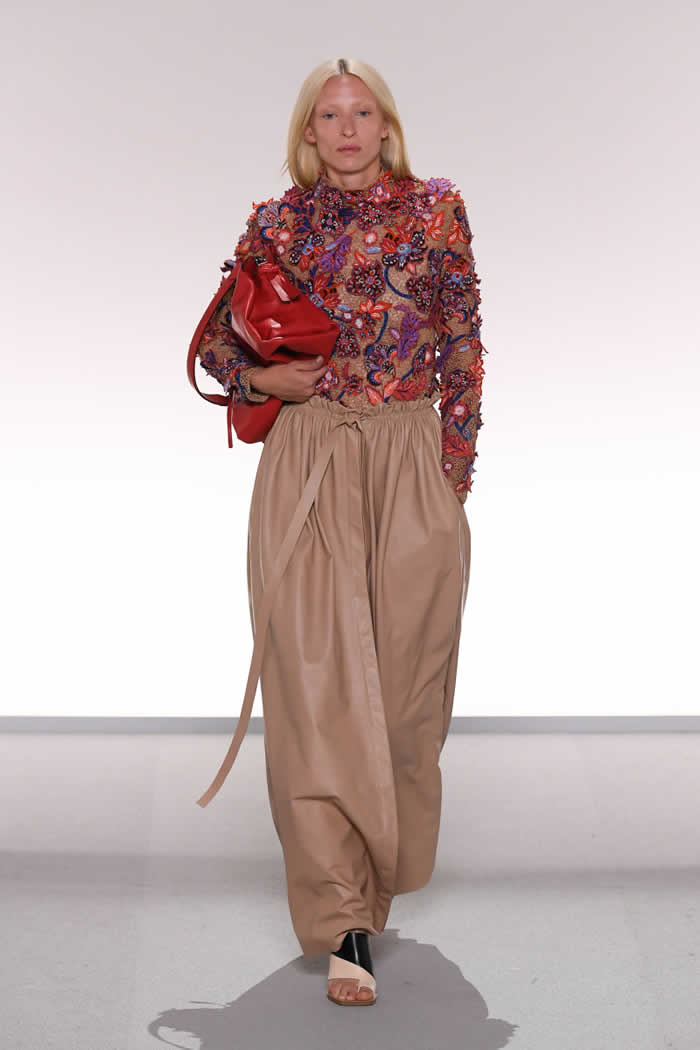 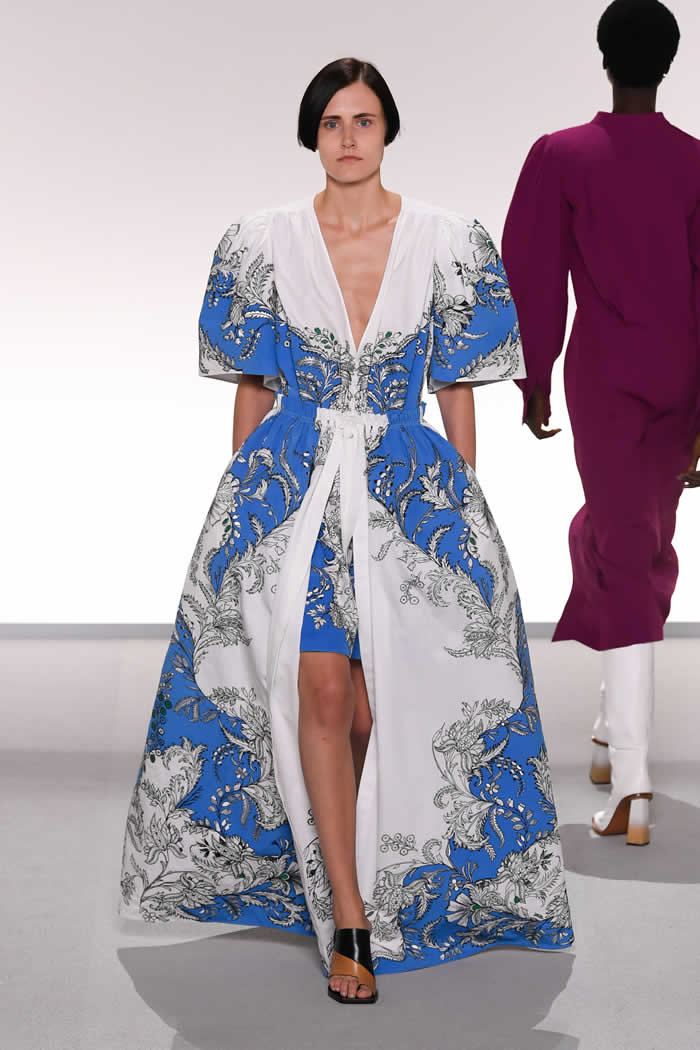 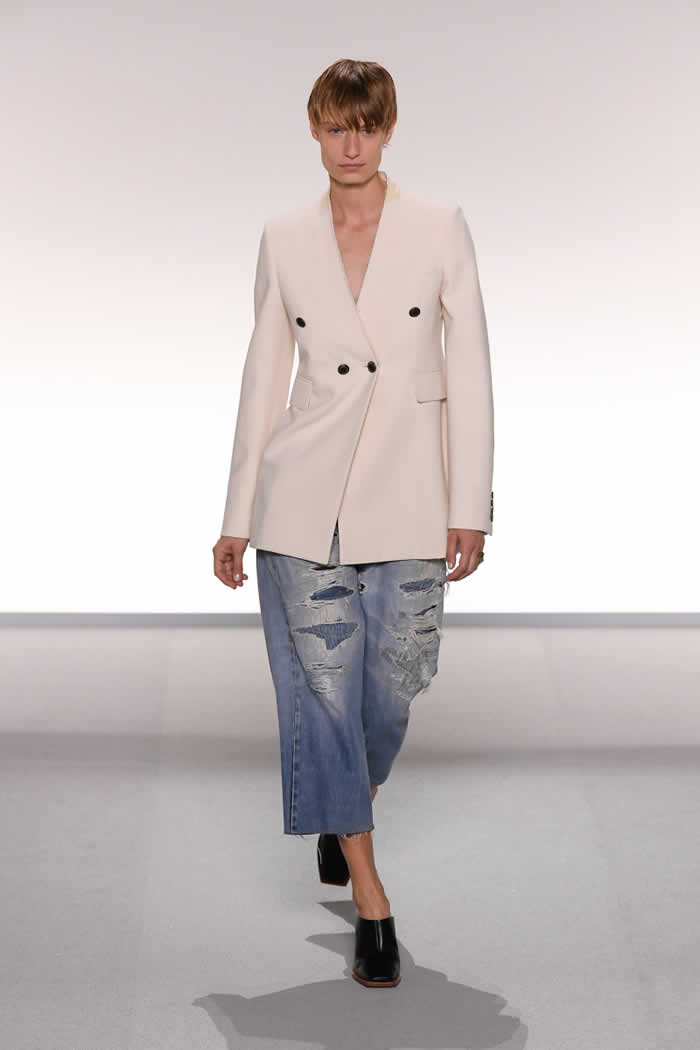 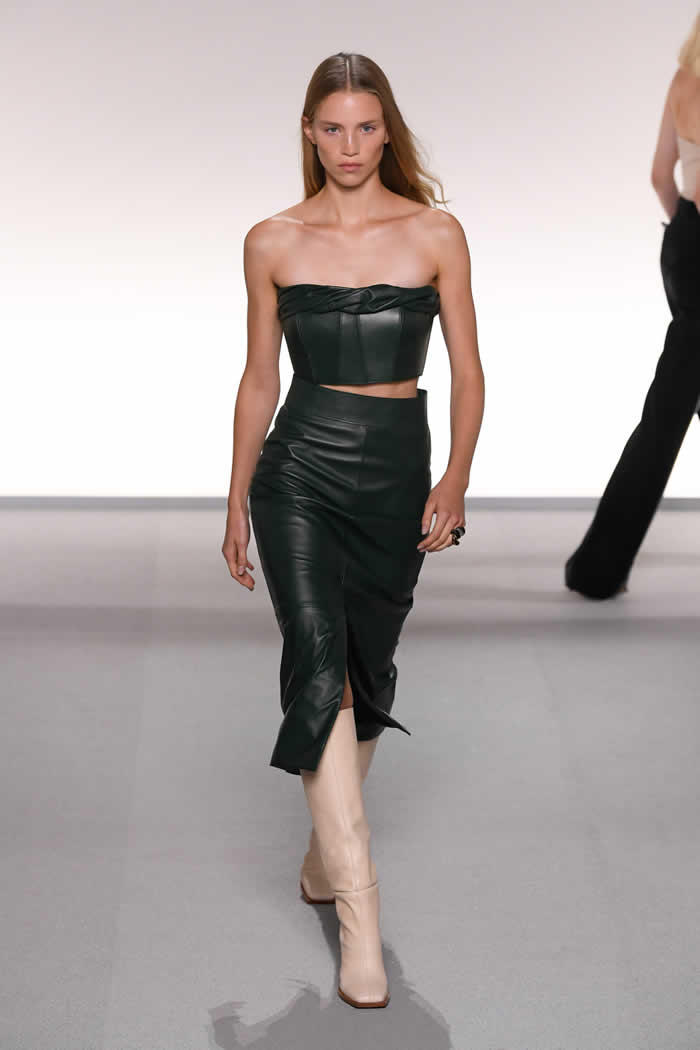 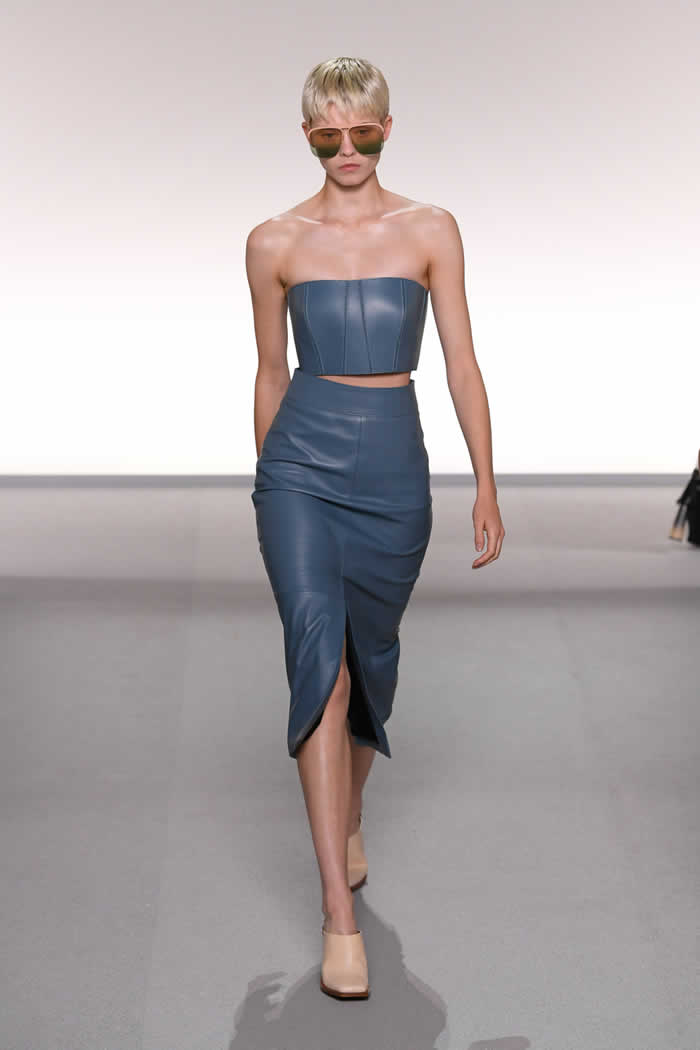 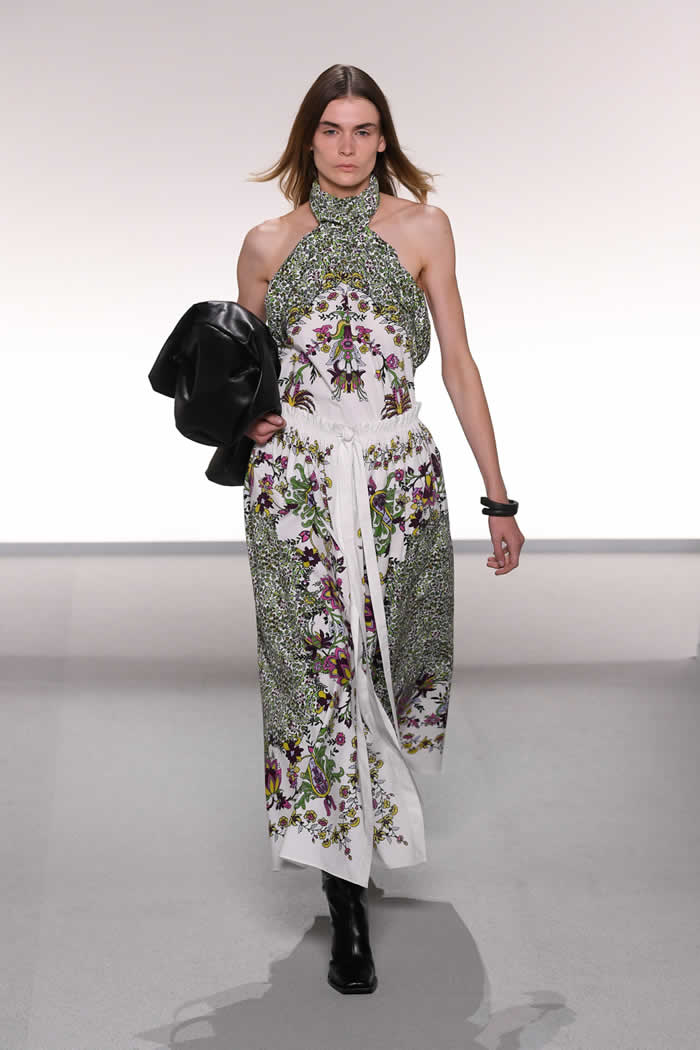 Inspired by the Nineties, from the tomboyish way women dressed in New York to the couture-driven flamboyance happening in Paris, Clare Waight Keller showed a confident and controlled collection that hit many of the season’s key trends.

If there’s one thing that’s courted controversy on the runways in Paris, it’s denim, from the fraying denim shorts as a base layer for the circa 2020 “le smoking” at YSL, to Seventies Landlubber throwback jeans at Celine, to ripped and shredded Nineties iterations at Givenchy, reworked from actual upcycled vintage pieces in a nod to sustainability, bravo Clare Waight Keller!

It’s not that designer denim is a new phenomenon, far from it. But somehow, in this era of class and climate warfare, it’s been a lightning rod.

But the beauty of denim is that it can be the uniform of the aristocrat and the protester. Designer denim costs more simply because they can because customers are willing to pay for context and emotions and values. And at Givenchy, Keller has created the whole package, carving out a feminist fashion niche that is honest and questioning (dressing a duchess for her big day didn’t hurt, either).

Titled “NY Paris 1993,” Waight Keller’s latest collection was a look back at a particular moment in time in the Nineties when she started working in fashion at Calvin Klein and was traveling between New York and Paris. She was reminiscing about the contrast of the two fashion cities — of the raw, pared-back, tomboyish way women dressed in New York versus the ruffled, Eighties hangover still happening in Paris.

Waight Keller brought both impulses to the runway, giving women the freedom to be either or both, wearing a great pair of ripped jeans, one leg practically bleached out, an ochre silk high-neck blouse with delicate rows of buttons and the kind of clogs my dad use to call clodhoppers, or a great-looking tailored denim coat dress, faded on one side and less so on the other.

The designer tapped into the leather craze of the spring, showing a black paper bag-waist midiskirt and matching muscle T with scarf neckline that was on point, and a bottle-green pencil skirt and bustier top with braided edge detail that was just the right amount of sensual.

And she brought the season’s couture volume craze to real clothes, like a khaki cotton dress with balloon sleeves that would be a wardrobe workhorse, and a festive blue floral sundress with a single ruffle sleeve that wasn’t too precious to wear to brunch with girlfriends.

Tailoring was gorgeous, as on a glossy green silk blazer with hourglass waist pronounced ever so subtly, worn over matching Bermuda shorts. (That cutting skill is worth paying extra for, thank you very much). For more dressed-up moments, party dresses were bursting with bouquets of 3-D-embroidered blooms that managed to not overwhelm the wearer.

Rather than doing the theme thing, or designing with a specific Givenchy woman in mind, the designer said backstage she prefers to think of individuals, which can be code for lack of focus, but not this time. She said, “I’m actually very diverse in the way I dress, and I think the character part of who we are is something we should celebrate.” Amen.