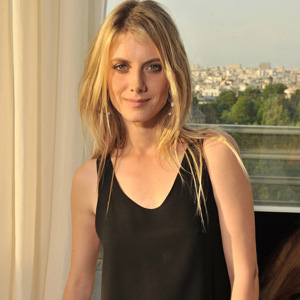 “What’s my favorite love story?” asked Clémence Poésy. “My parents’,” she laughed, adding that without it, she wouldn’t be here. The actress starts filming a political thriller in September, which also features actors Melvil Poupaud and André Dussollier.

“Mine!” was Mélanie Laurent’s retort to the love-story question. She’s been directing of late, not only the advertising campaign for the Chloé scent, due out in September, but also a documentary about worldwide initiatives in ecology. Chloé creative director Clare Waight Keller’s own tale of love – when she met her husband – was her favorite. “I was in New York, I was 21. I met him when I was really young and, well, you just fall in love so fast when you are that age,” she said. “It was a great experience.” Rachida Brakni is about to try her hand at directing for the first time. “The film is on women who visit a father, a brother, a husband in prison. It’s about them,” she said. Marie-Josée Croze is in the midst of filming the biopic “Arletty,” also starring Laetitia Casta. Croze has numerous upcoming movies, including Matthieu Delaporte’s “Un Illustre Inconnu” (or “An Illustrious Unkown”) with Mathieu Kassovitz and a Wim Wenders film with James Franco and Charlotte Gainsbourg. Calvin Klein Bares It All With Reveal

Fossil Enters Fragrance With Debut of 1954

Calvin Klein Bares It All With Reveal