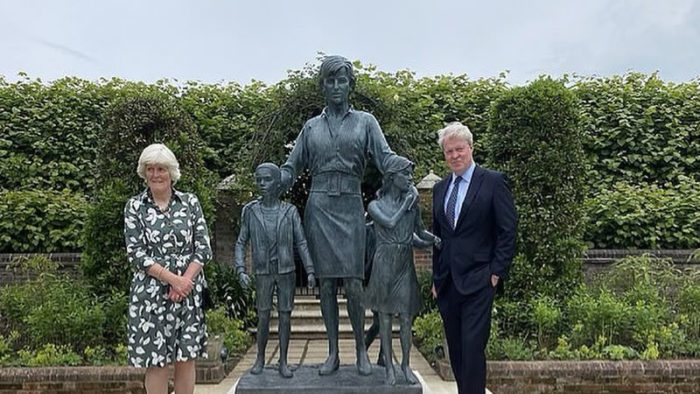 British royal family news shows that Princess Diana’s statue memorial was unveiled to the public on July 1 in Kensington Gardens.

It would have been her 60th birthday if the former royal had lived beyond the age of 36. She died from the injuries she incurred in a Paris car crash and the fallen but still popular ex-royal was immediately dubbed, The People’s Princess.

On Thursday her immediate family attended a mostly solemn unveiling of the memorial at the Sunken Garden in Kensington Palace. Her outspoken brother, Earl Spencer, and her sisters Lady Jane Fellowes and Lady Sarah McCorquodale were among the handful of guests present.

But all eyes were on her warring sons, William Duke of Cambridge and Harry Duke of Sussex before, during, and after they pulled down the tarp that concealed their late mother’s likeness.

William And Harry Are Reportedly Estranged
After the family reunion of sorts Charles tweeted two photos together with the caption: “Today, in Kensington. A good day.”

A mere 16 persons were allowed in, including Diana’s sons. Previously they had issued a joint statement and neither made a speech. It was a low-key affair, and everyone was on their p’s and q’s, aware that the whole world would be watching not at the statue per se, but at the stubborn brothers.

Neither William nor Harry spoke formally at the ceremony although they chatted with Charles and their aunts Lady Jane Fellowes and Lady Sarah McCorquodale. It was left then to Charles to make a statement to sum up the day.

Speaking on ITV’s Lorraine, the 9th Earl Spencer said, “When I look at all these newspapers going berserk again and I’ve always found it so hard, I think it’s because I’m not very imaginative, but I always see things in terms of family.”

“And I remember when I was a boy and Diana became Princess of Wales, I just sort of plowed along on the same path.

You separate the media personality from the real person who’s a member of your family, and that’s all that matters at the end of the day.”

Was he making a sly point about the reported royal rift between William and Harry? Numerous royal watchers speculated as to how Diana would have felt about and dealt with their cold war.

Some think she would have decreed their makeup, many have commented on the heartbreak she surely would have felt. Sadly, the world will never know as she died far too young, her whole life in front of her.