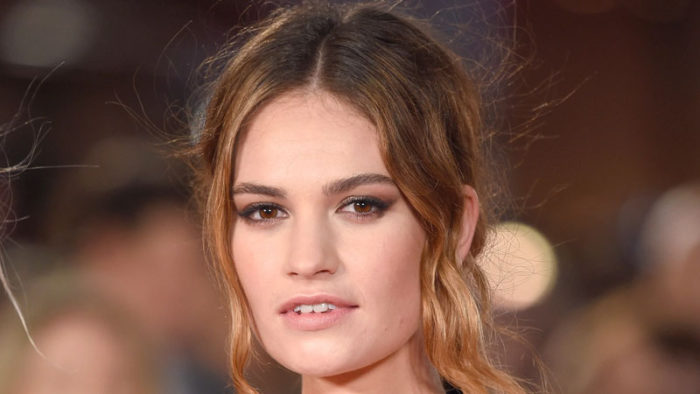 Lily James has transformed into Pamela Anderson for her new role in the upcoming Hulu show Pam & Tommy and the typically refined actress has never looked more different in the photos that just emerged from set.

In images that were just revealed from behind the scenes, James can be seen rocking Anderson’s classic bangs and platinum locks for the beginning of filming on the limited series and our jaws are on the ground!

James shared a busty snap to Instagram on May 8 showing off her best Pamela Anderson impression with some sultry eye makeup and a tightly laced black corset. The 32-year-old actress captioned the image, “It’s great to be blonde. With low expectations it’s very easy to surprise people” – Pamela Anderson.” Clearly her celeb friends were forced to do a double take, with actress Karen Gillan commenting, “Woah!! This is such a transformation! Amazing!”

The first images of James and her costar Sebastian Stan who will be playing Tommy Lee Jones in the series was also shared to Instagram on the same day, with the pair recreating an iconic image of the ex-couple. Stan shared the jaw dropping picture on social media captioned simply, “Love bites,” with both actors looking completely unrecognizable. Pam and Tommy would be proud.

A post shared by best of lily james (@badpostslily)

The new series will chronicle the relationship between Pamela Anderson and Tommy Lee Jones after the pair’s sex tape was illegally stolen and released in 1995. The scandal that followed the leak was formative for the couple, and Seth Rogen will also star in the series as the man who stole the nearly hour-long video from a locked safe. While the series is sure to be filled with drama, all we know right now is Lily looks great with bangs!