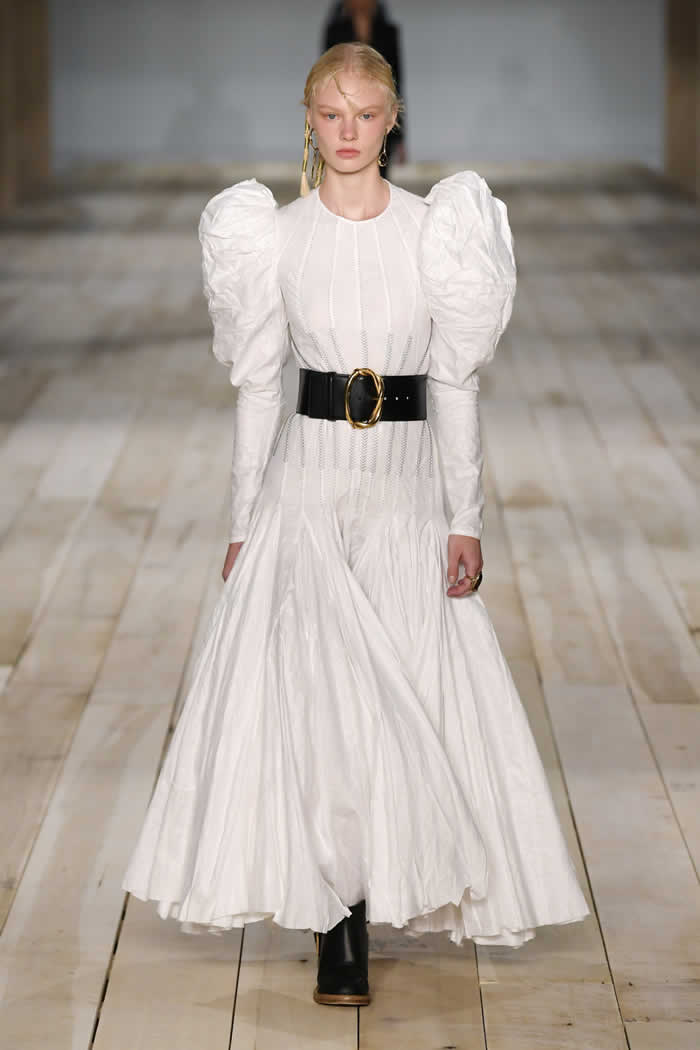 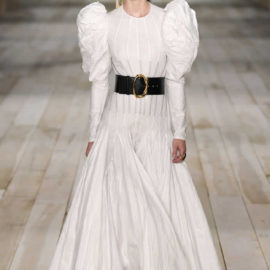 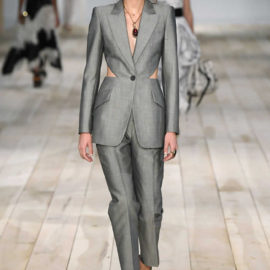 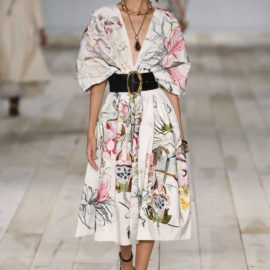 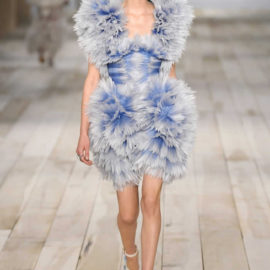 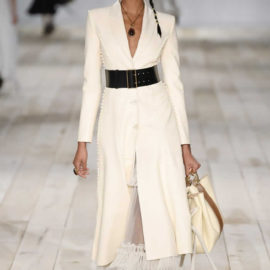 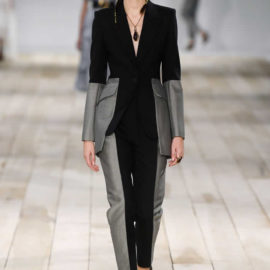 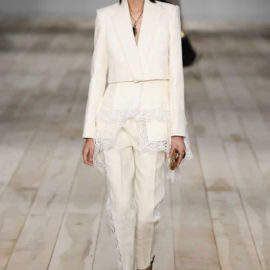 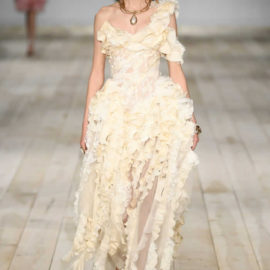 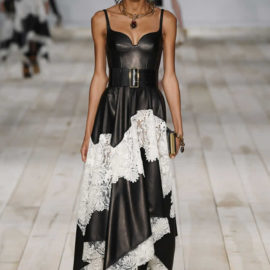 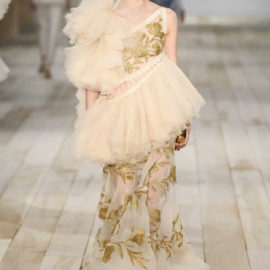 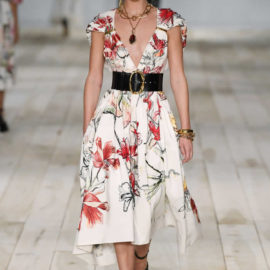 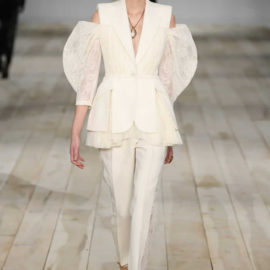 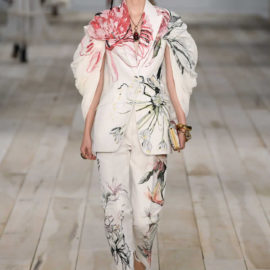 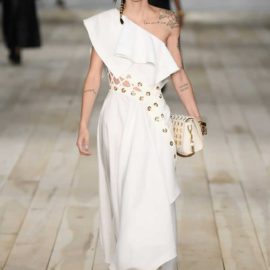 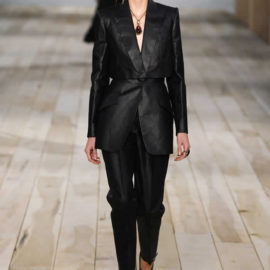 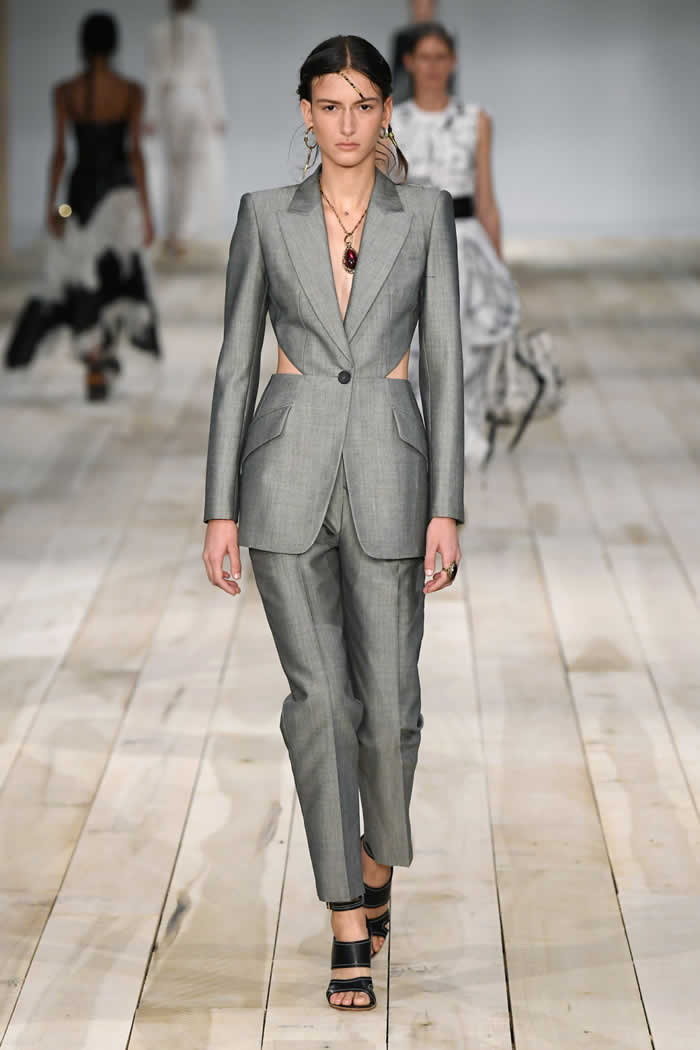 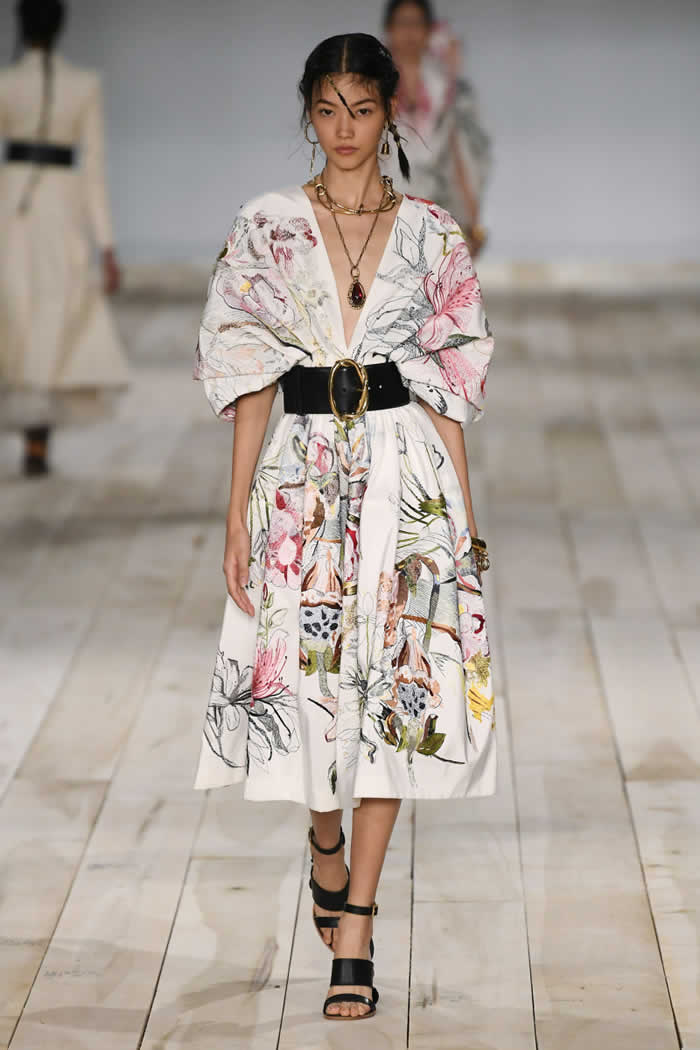 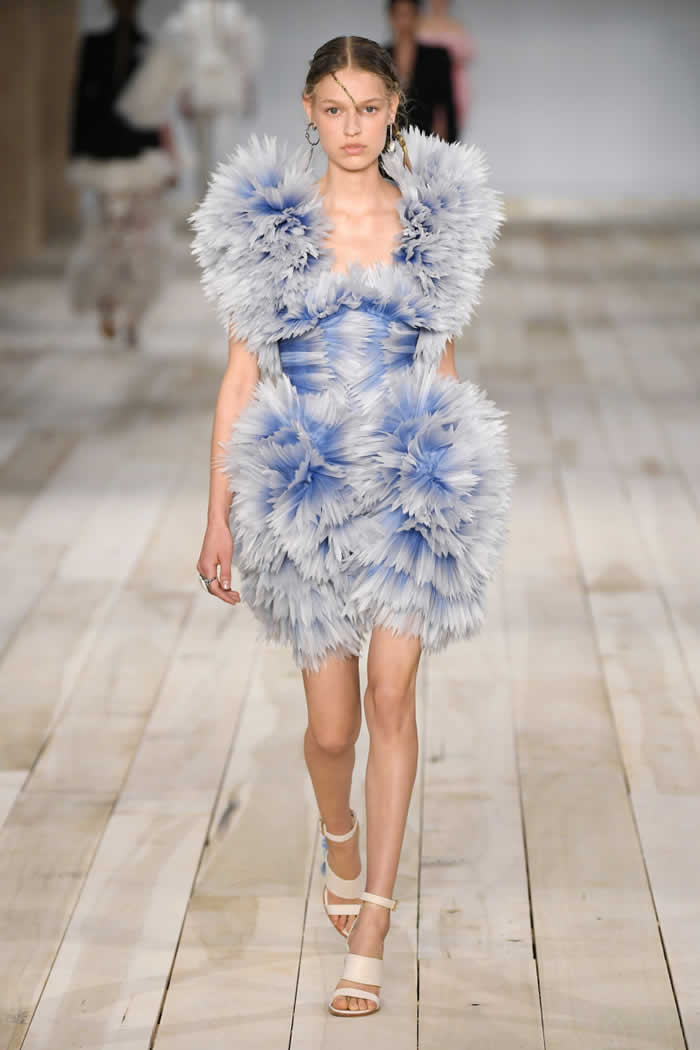 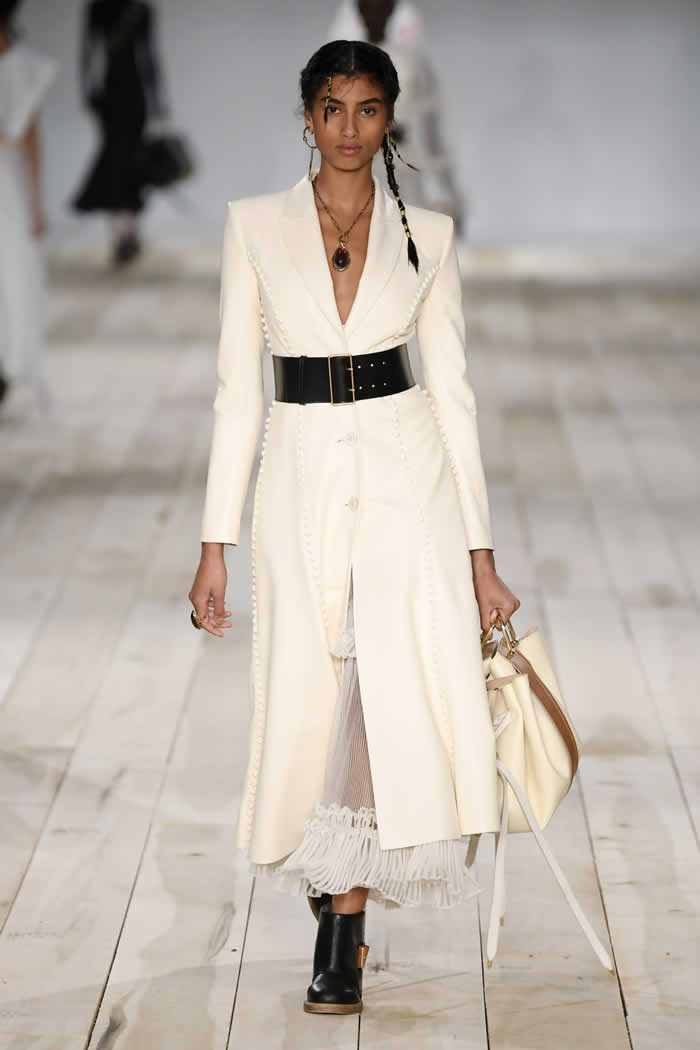 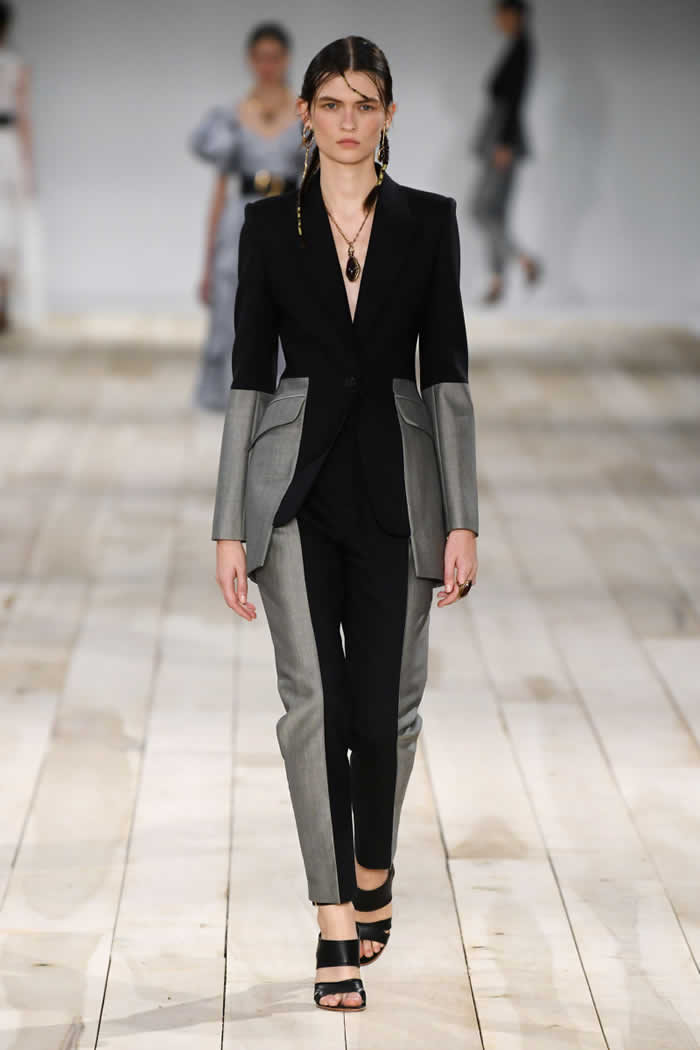 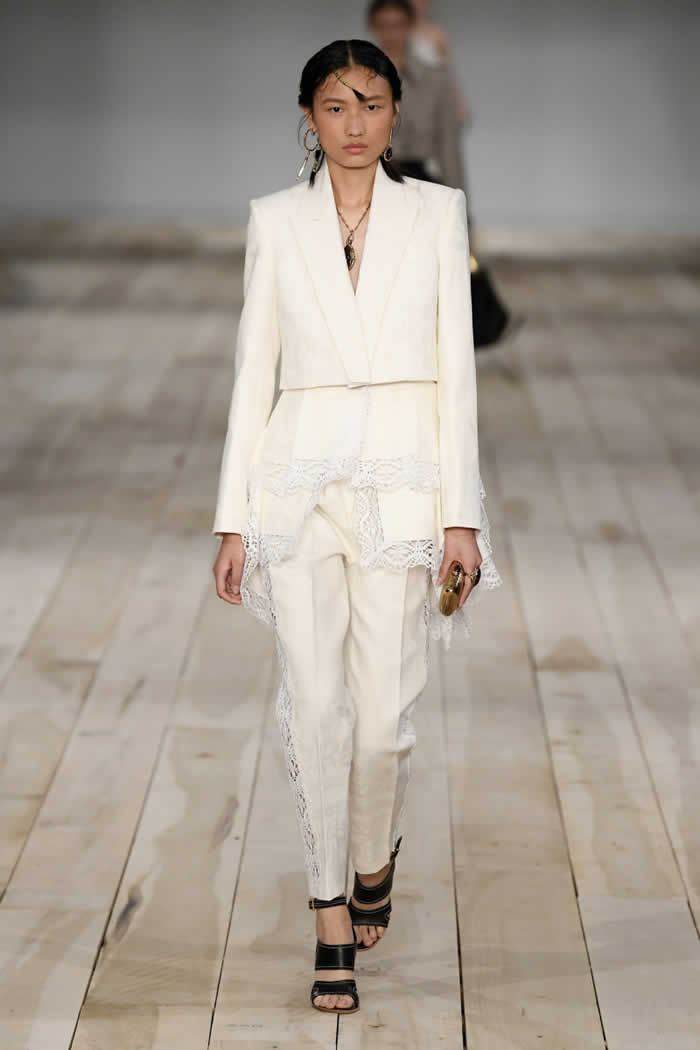 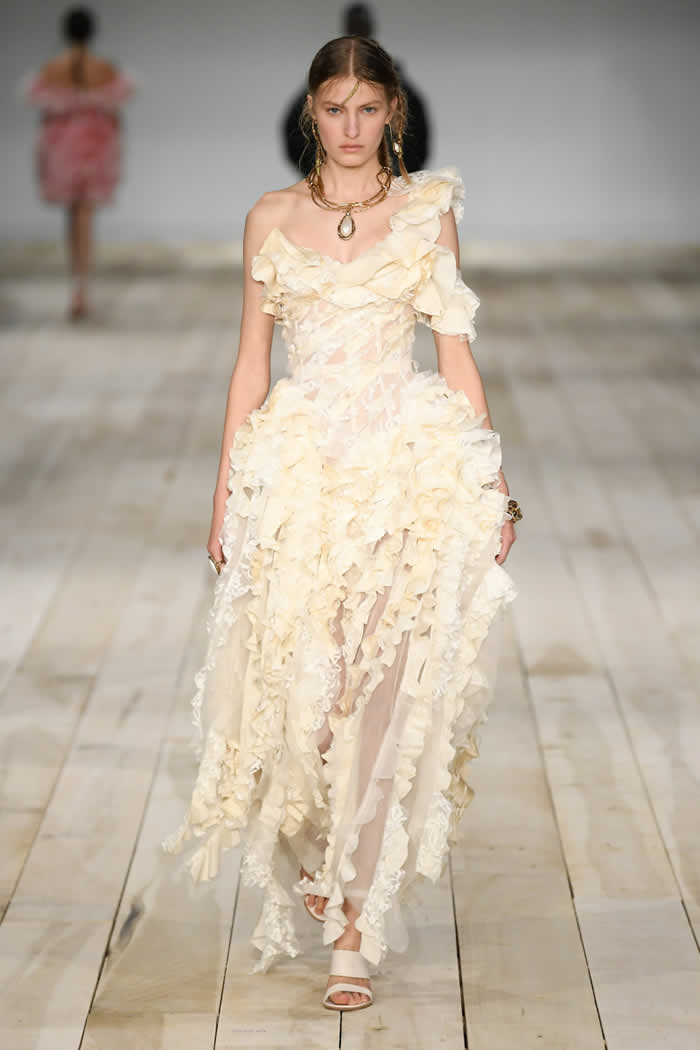 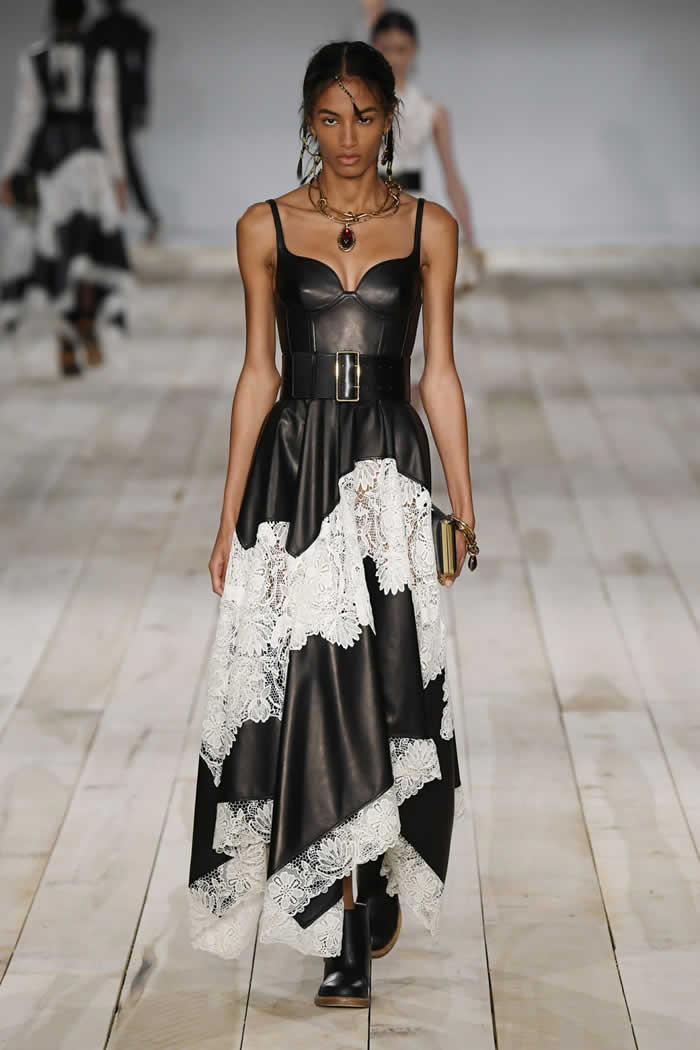 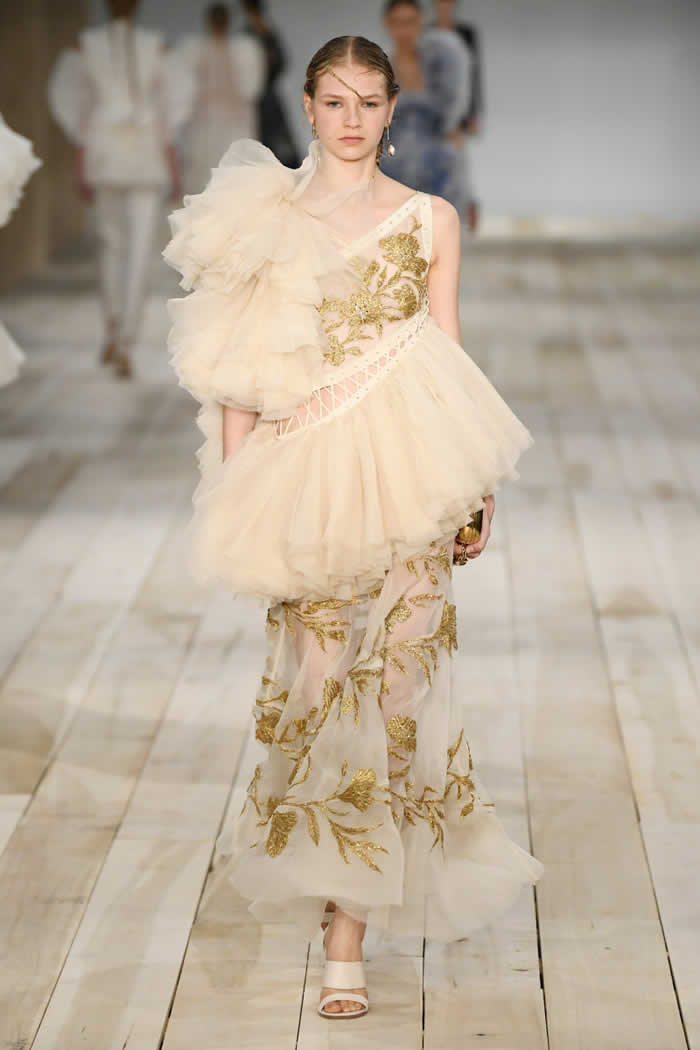 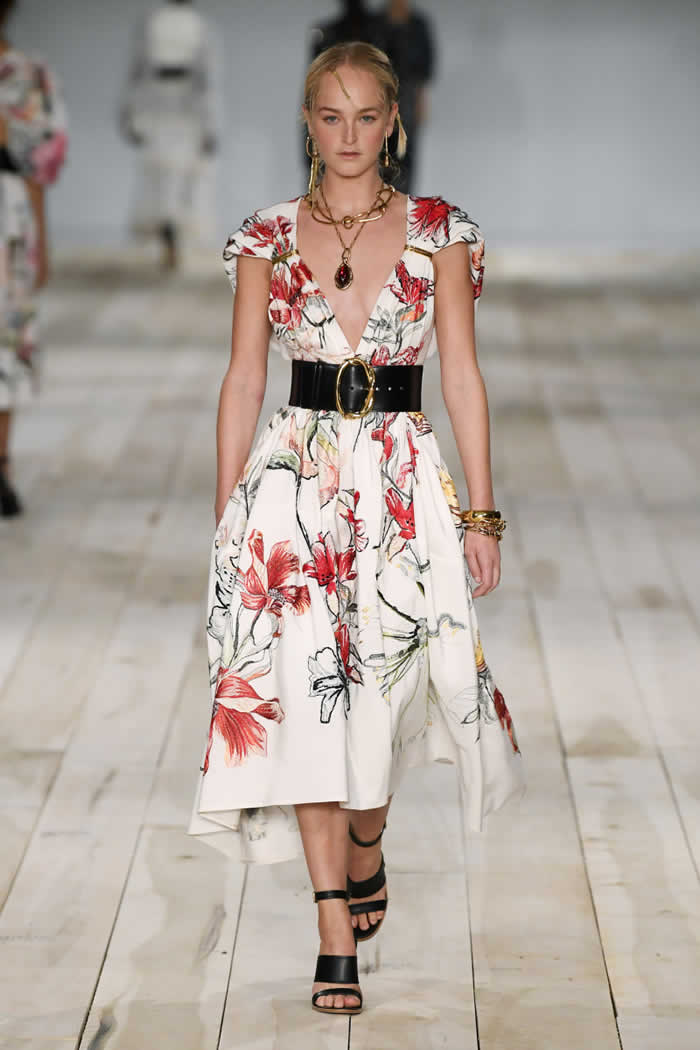 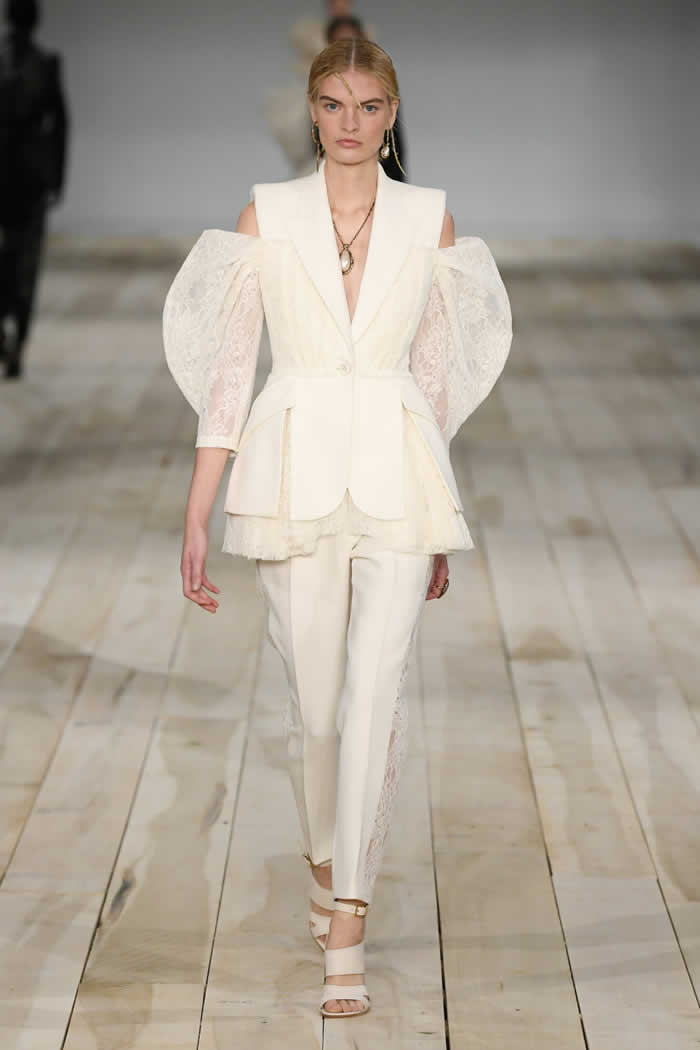 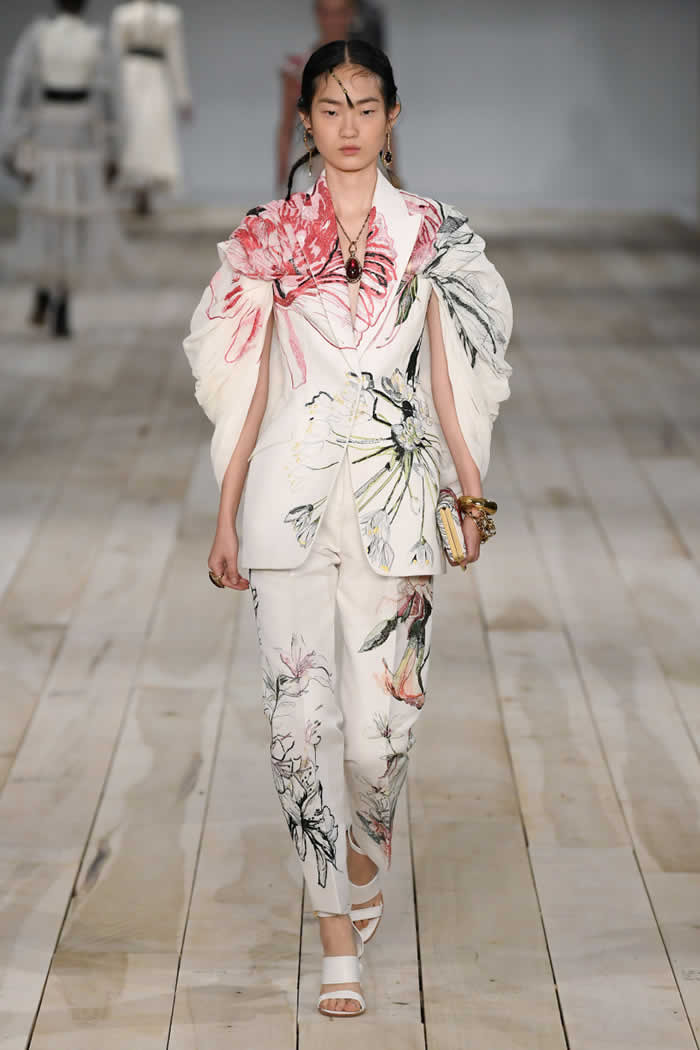 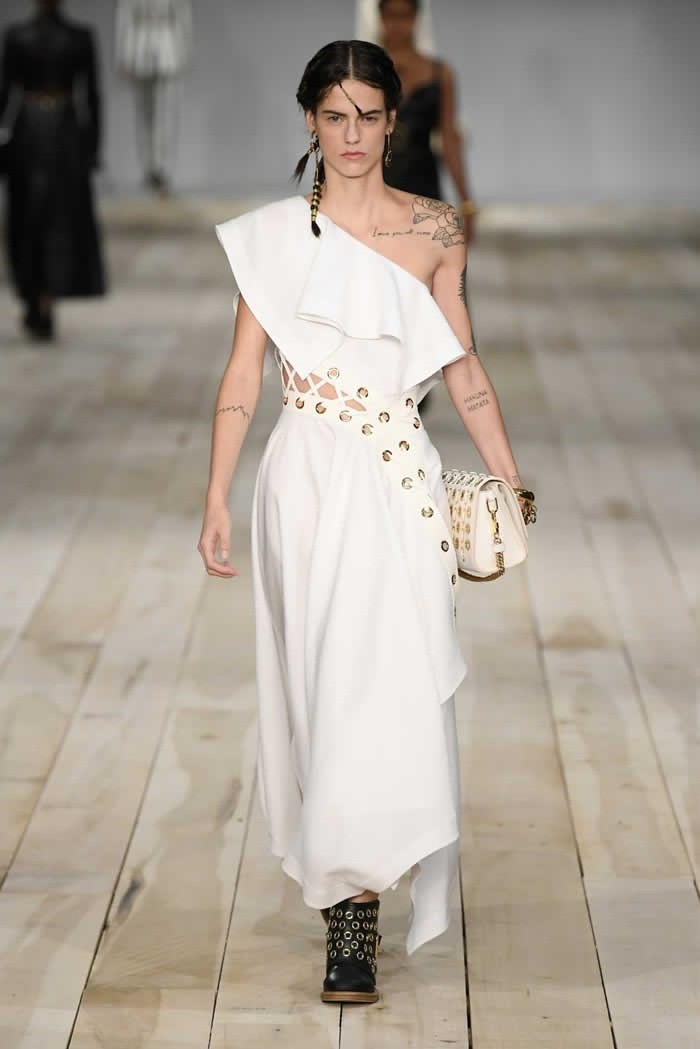 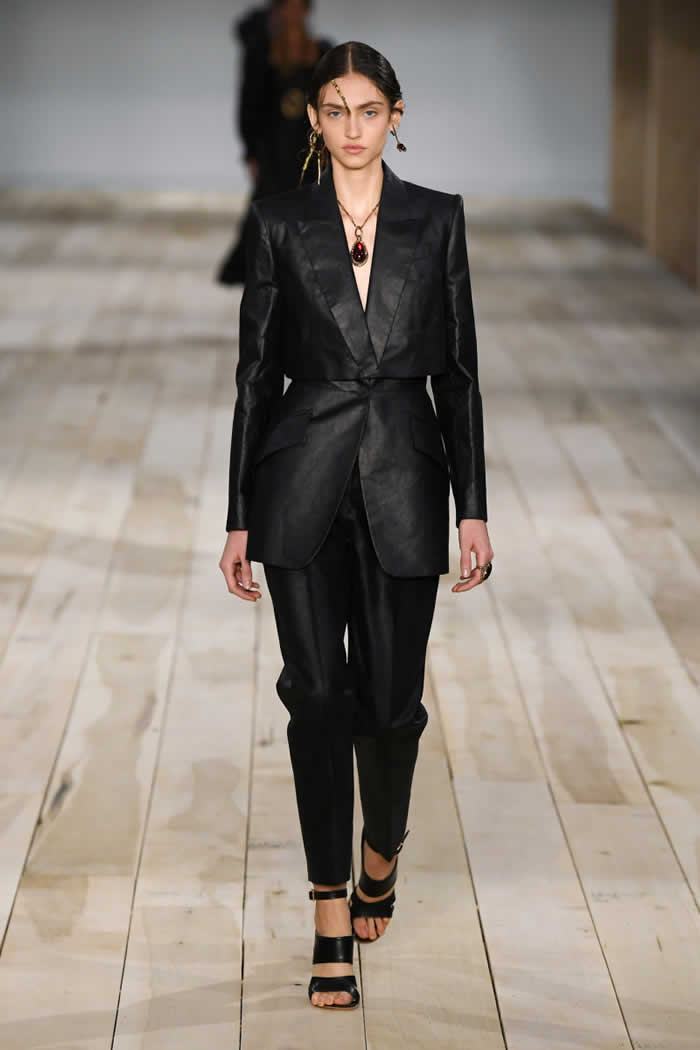 By focusing on Irish handcraft traditions and tapping not just her atelier but the entire Alexander McQueen team to lend hands to the collection, Sarah Burton put a human face on luxury.

It took a village of artisans to make the Alexander McQueen collection. And Sarah Burton, a heroine of handcraft, searched near and far to find them. “Each person tells their own story and each garment tells its own story and the time it takes to make something,” the designer said of the season’s focus on the personal touch.

In Ireland, she worked with some of the last remaining damask linen weavers, beetling mill workers and flax farmers. Closer to home, she tapped not just her atelier, but every single member of the Alexander McQueen team to hand-embroider Stella Tenant’s swirling white linen dress with dancing girl motifs. They even signed their initials to the work and took a bow at the show.

“It really brought everyone together — from h.r. to the security guy to the CEO,” Burton said of the modern-day sewing circle, inspired by the popular British Stitch School community workshops. “People from all different departments were talking who’d never spoken…if we didn’t have mindfulness before, we did after that.

Besides sounding like the sort of team-building plenty more offices could use, the exercise underscored that this stellar collection was about putting a human face on luxury.

“I wanted it to be about stripping back, the immediacy of the clothes and the time it takes to make them,” said the designer, who mixed her signature romantic tailoring with feminine flourishes and thoughtful details to splendid effect, achieving the golden mean of aspirational and approachable.

The collection was a coming together around traditional handwork, as on a gorgeous black linen peplum jacket with exploded sleeves and peg trousers, “beetled” to create lived-in crinkle and sheen. (Originally used on linen tablecloths, it’s a process that involves hand-painting a piece of fabric with potato starch and hammering it flat.)

With an eye toward another kind of sustainability, remnants of organza, tulle and lace from previous collections were upcycled to create the oyster-hued ruffles spilling out from Burton’s signature tailored silhouette — a blazer slashed at the middle with extended tail drape.

There was even some preserving of flowers. Endangered blooms researched at Kew Gardens in London inspired the embroidered ivory guipure lace paneling on a featherweight black leather dress, as well as the silver bullion blooms on a covetable black cocktail frock with exploded cocoon sleeves and a draped asymmetric skirt.

Adding a more streamlined simplicity was a black-and-white linen stripe suit with oversize gold eyelet and cord details at the open waist, and an engineered knit dress with gold grommets tracing the curves. Both read sort of nautical. On the other end of the dressing spectrum, the red-carpet realm, dégradé pink or blue hand-cut spiked flower puff dresses were rare blooms indeed.

Proving that ideas are worthy of preservation as well, Burton bookended the collection with a first look that was a take on the Eshu dress from Lee McQueen’s fall 2000 collection made in cream beetled linen, “bleached by the sun and the moon,” and a last look that was self-referential: a black silk jacket draped with the toiles used to make a rose dress from her fall 2019 collection shown just six months ago.