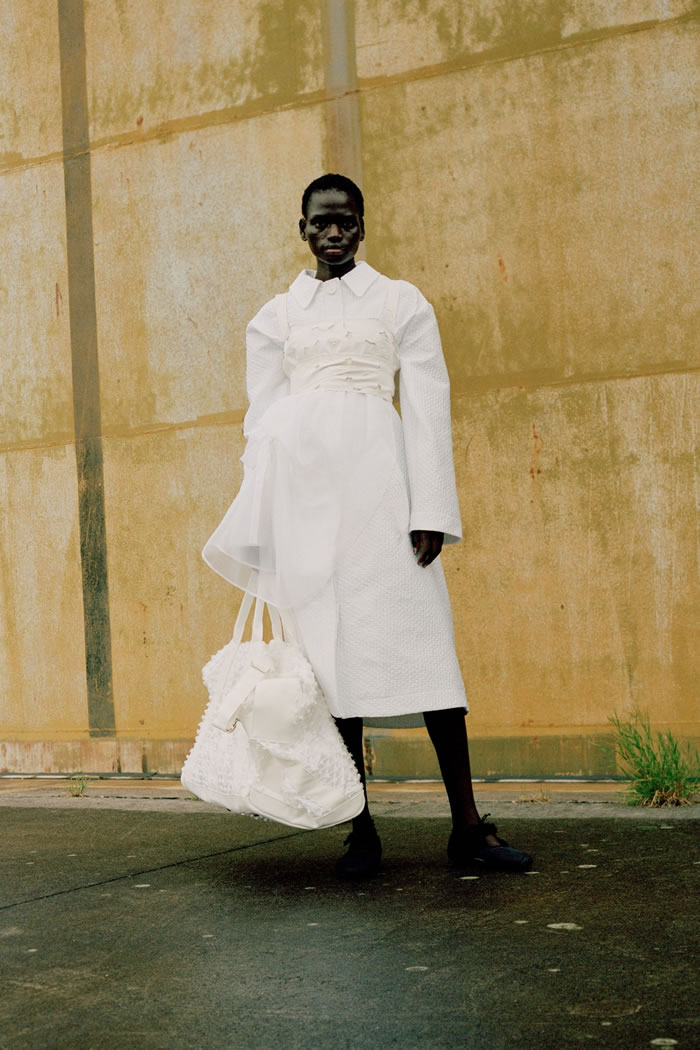 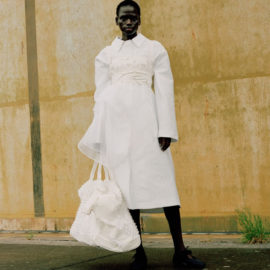 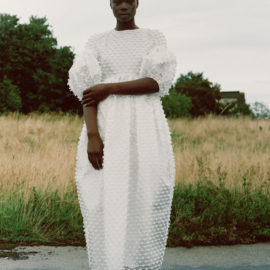 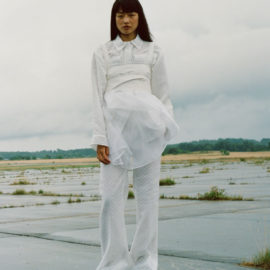 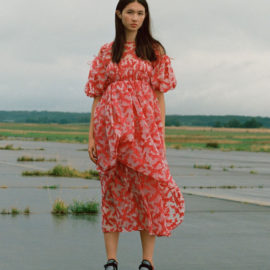 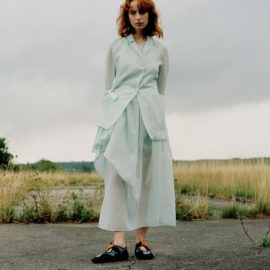 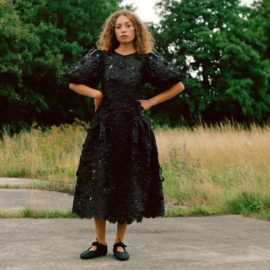 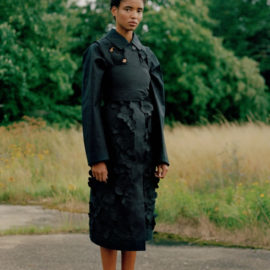 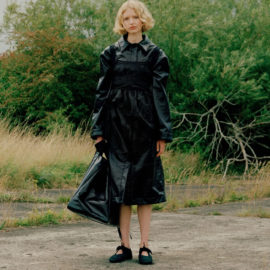 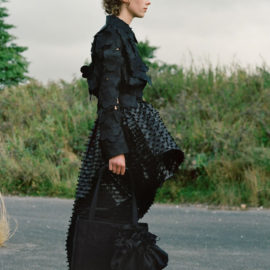 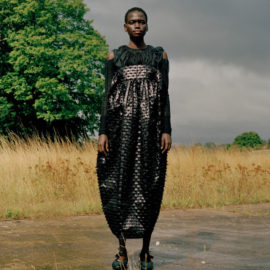 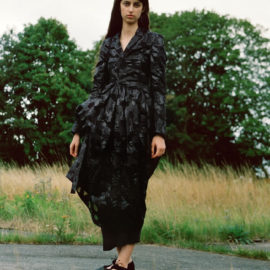 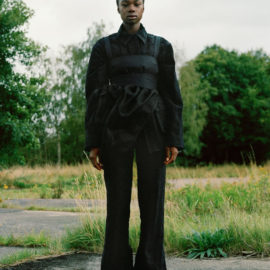 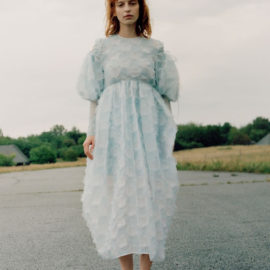 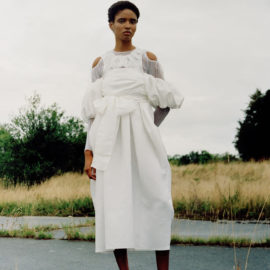 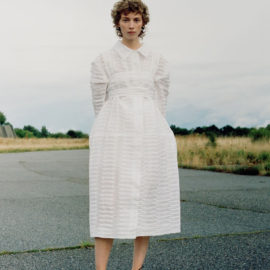 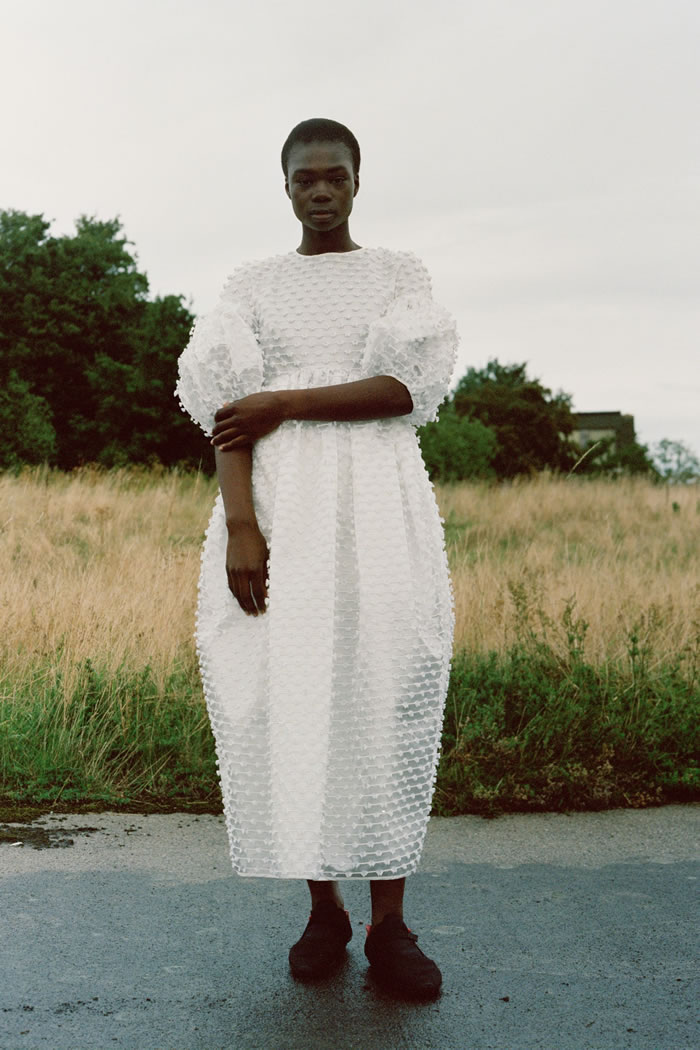 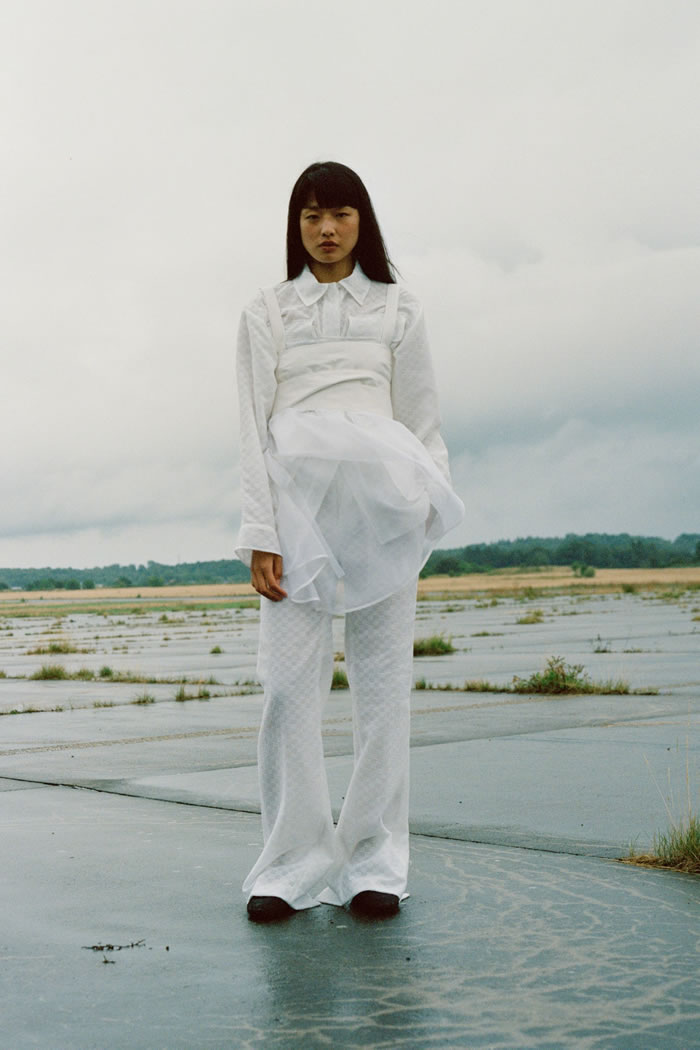 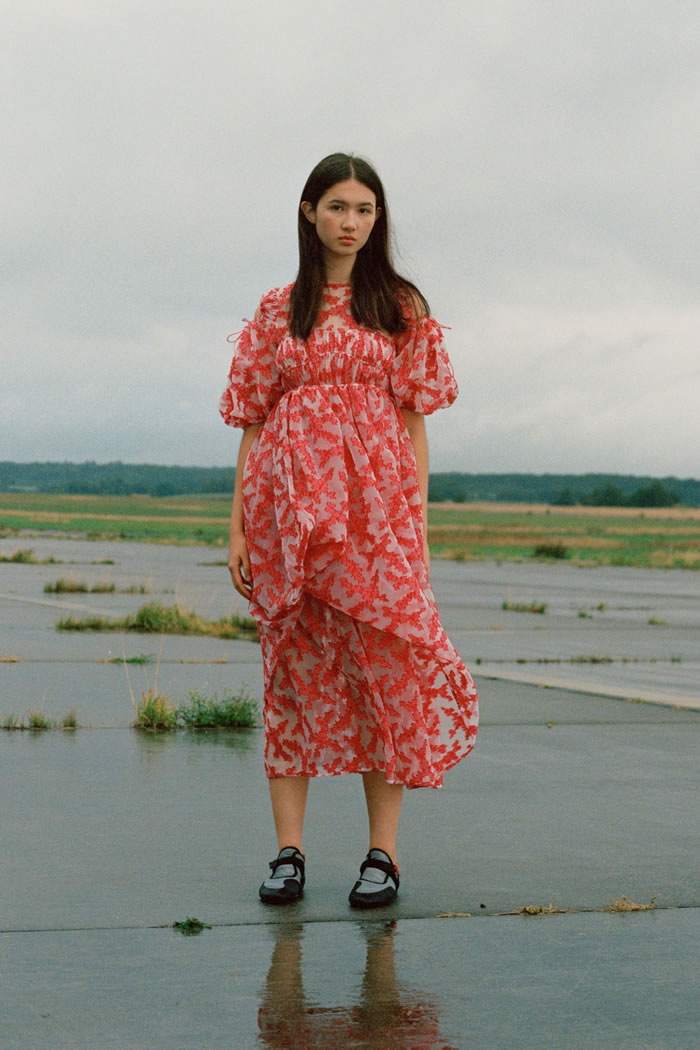 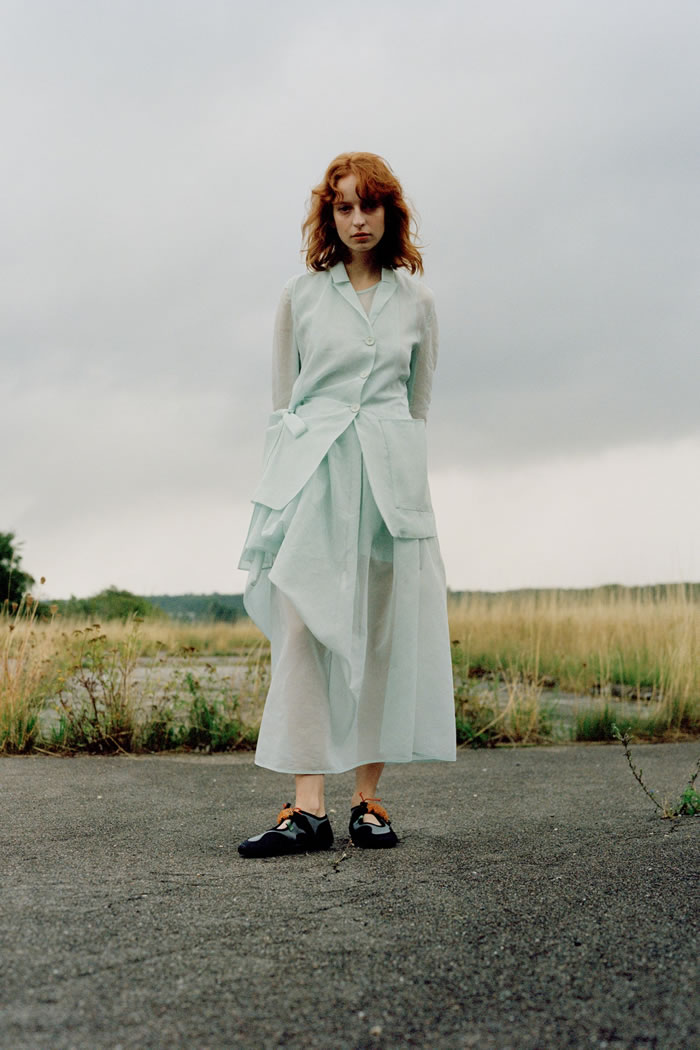 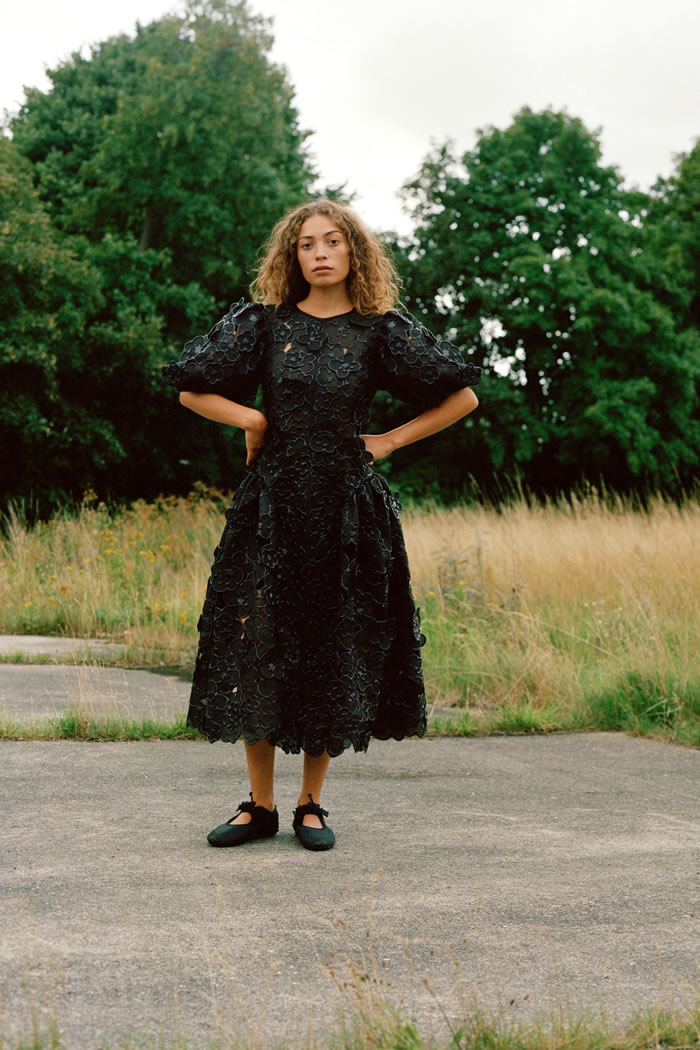 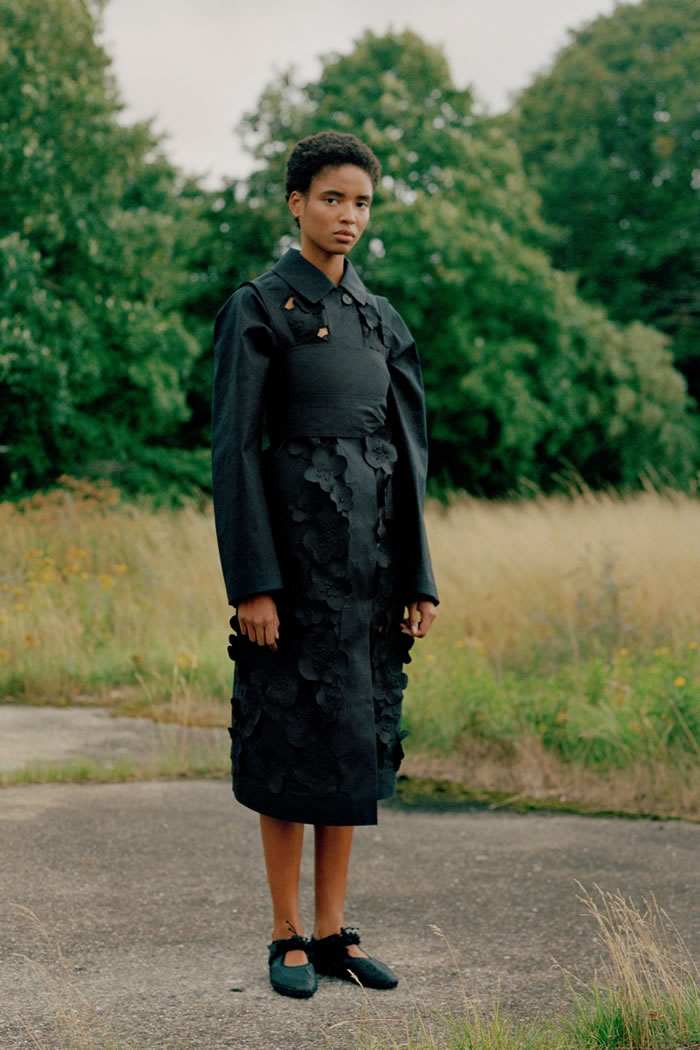 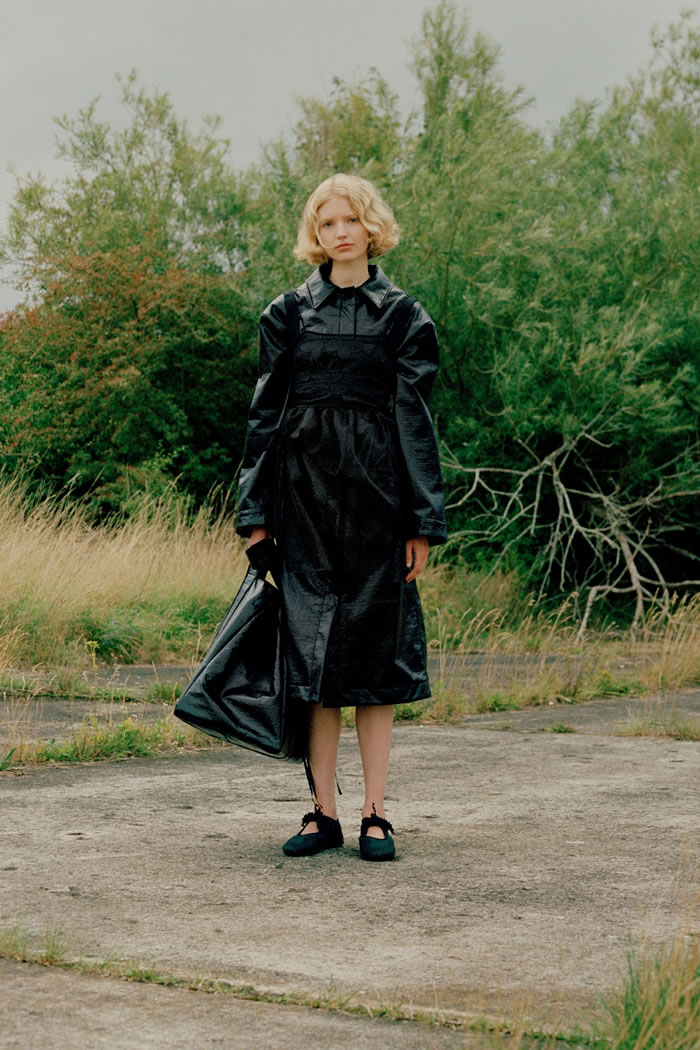 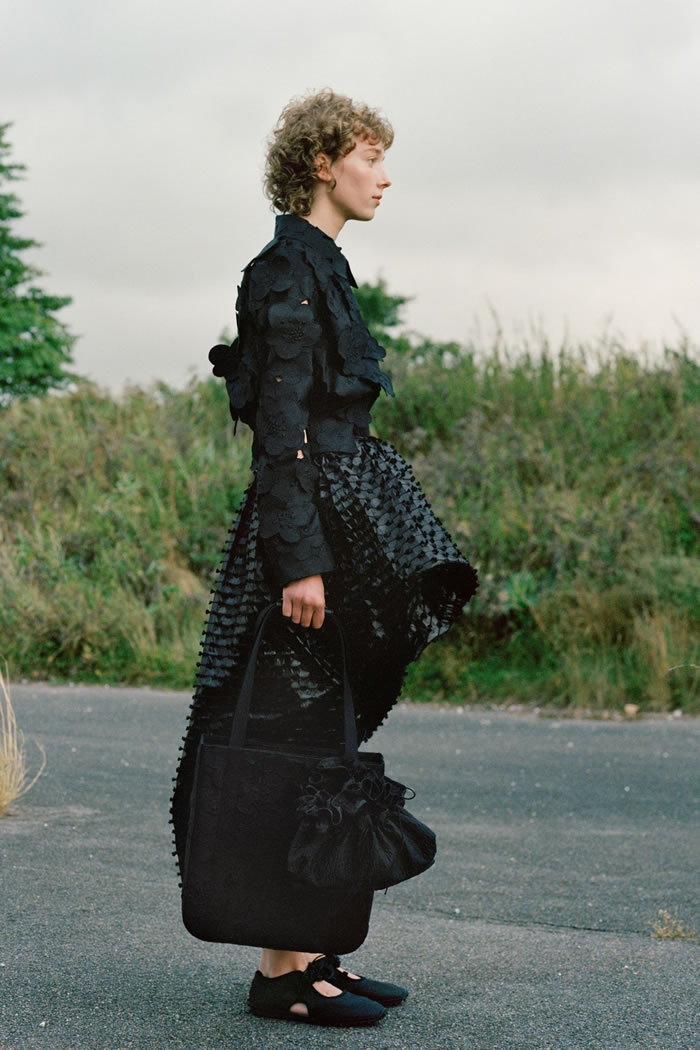 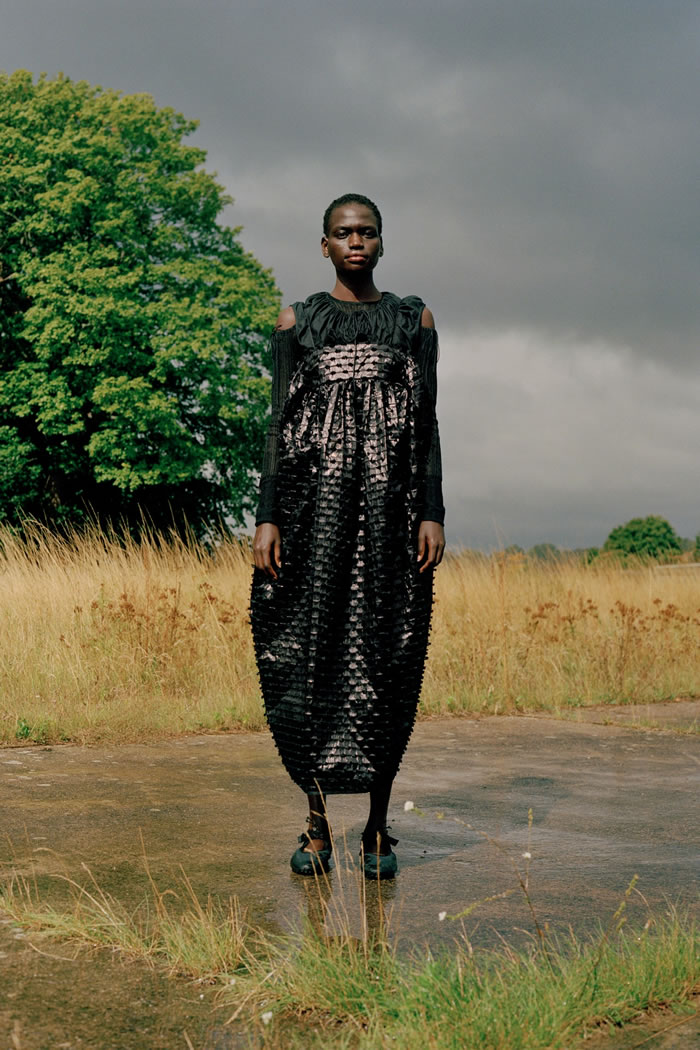 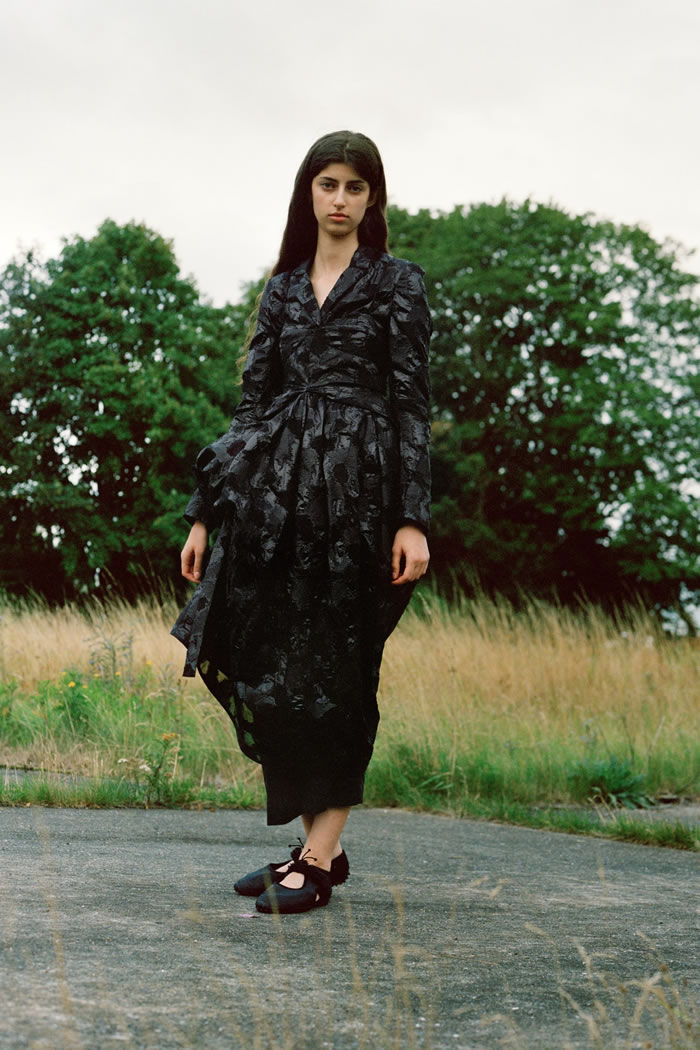 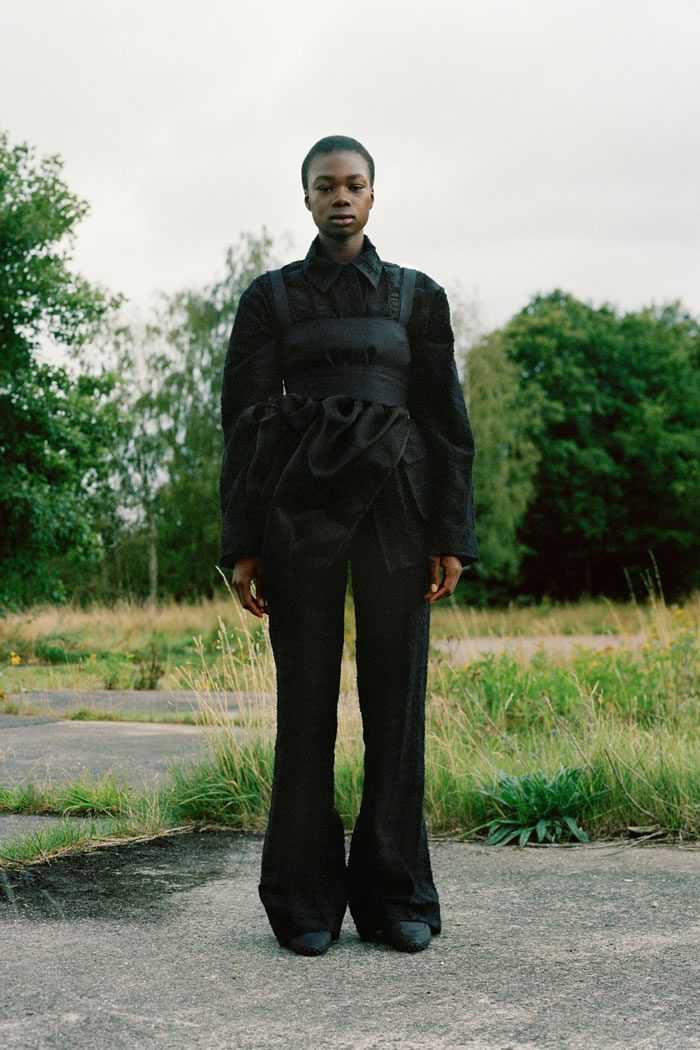 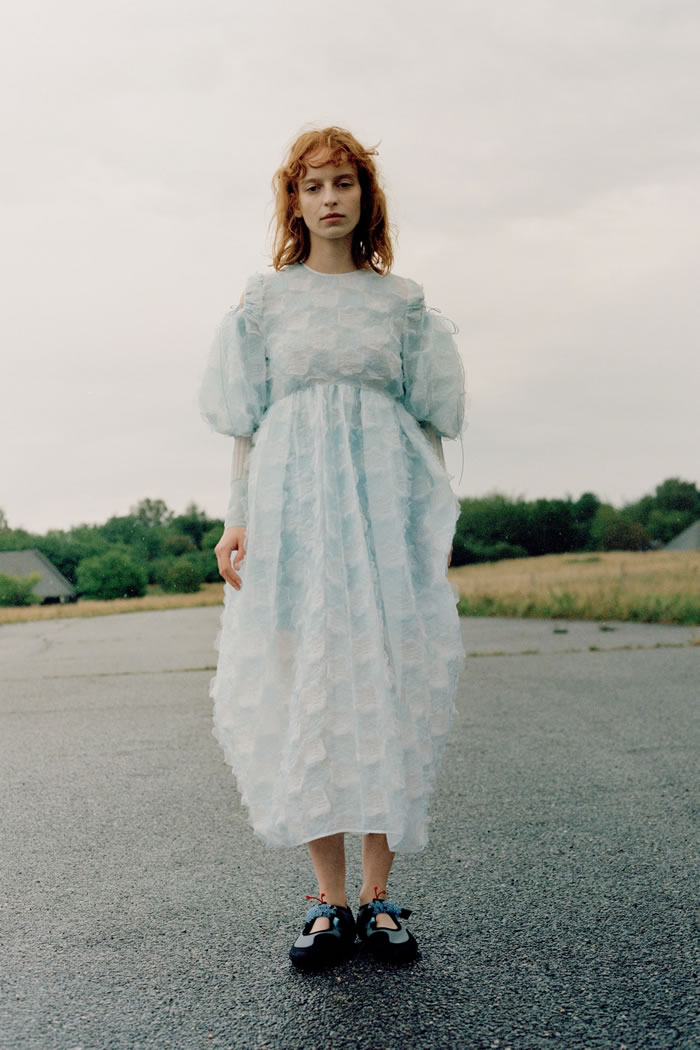 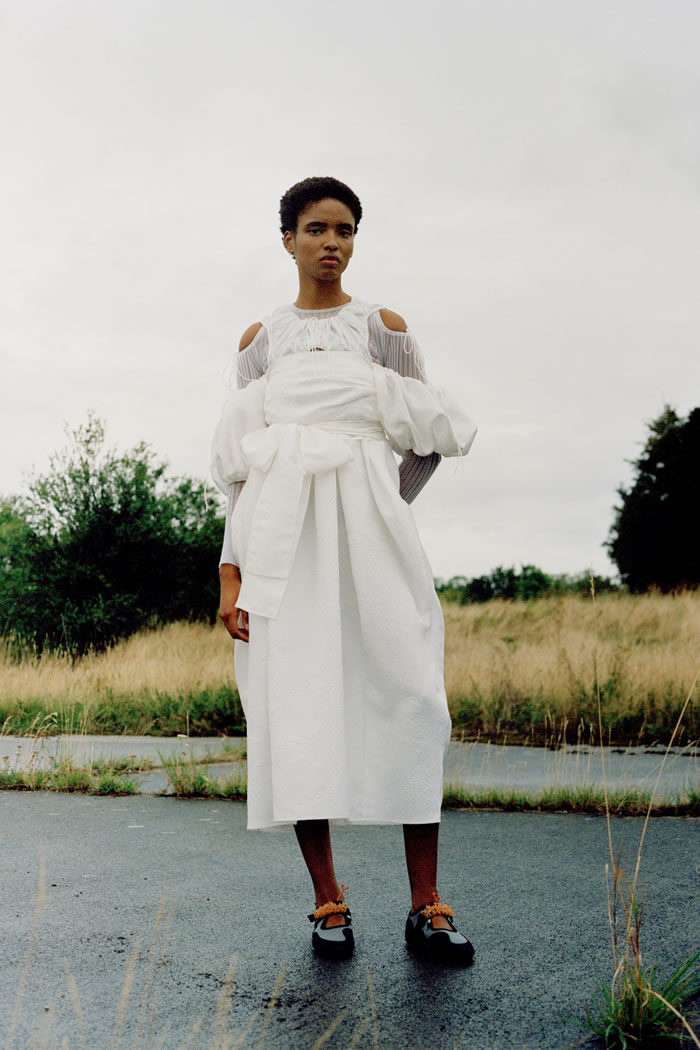 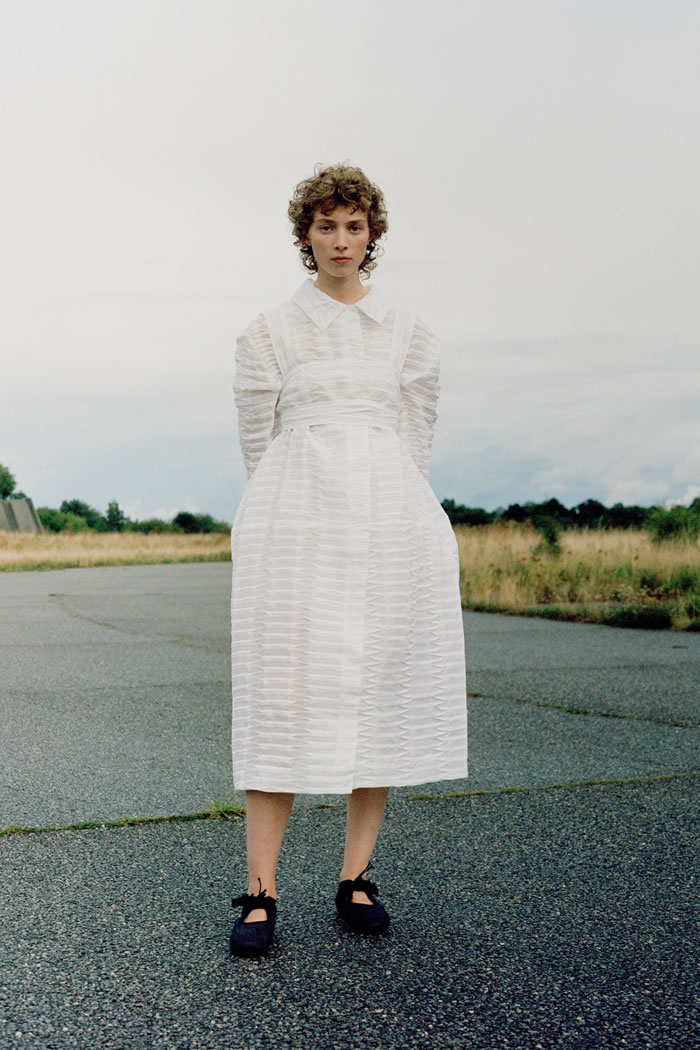 The modern fashion industry is wired for speed, sound, and transmission to best perform in a global arena. While many brands are stacking amps and turning up the volume, Cecilie Bahnsen has chosen to play acoustic.

This Danish designer delights in the feel and the sound of her fabrics, in “happy accidents,” and is open to sharing the stage, as she did this season.

Bahnsen teamed up with Okay Kaya (the Norwegian-American singer Kaya Wilkins) for her digital presentation; she’s introducing her first line of bags, made in concert with the Japanese company Chacoli; and she sent a box of clothes to the photographer Takashi Homma to photograph as he saw fit in his world.

The results, said Bahnsen on a call, not only complemented her work, but “it’s been such a great thing to learn how you as a brand, and as a young designer, get stronger by working together with people. And you get even more aware of your own identity, and your own handwriting in what you do, and you grow more confident in it.” All of these elements will be presented at a gallery in Paris; the 30 dresses on mannequins.

Bahnsen’s cursive is a legible one, her universe well-defined. While there is a dreamy, fairy-tale quality about her dresses, they are also of this world, a point that was brought home when I visited the designer’s studio and discovered that most of the team live and work in these dresses.

It’s wearing her own designs and seeing them in action that grounds Bahnsen’s work and frees it from being seen only as special-occasion wear. “It is really the beauty of the everyday, like the way you tuck up the dress when you go on your bike or roll up your sleeves to protect them when you’re working and these different kinds of drapes and folds accidentally happen,” she says. “These small accidents that change the silhouettes are just so beautiful and can inform so many new ideas, which was really the starting point this season.”

The first sign of newness is the palette, which moves from black and white into sky blues, petal pinks, and a tart red. Among the raised, embroidered, and fluttering cutouts, there’s the shimmer of rubber, used to outline an abstract floral.

Kaya appears in the video wearing only the underpinnings of a Bahnsen ensemble, a cutout drawstring top and pants, which brings home the way the designer builds her looks through layering. It’s a process she says she applied when approaching bag design too.

In a world, and a season, that is about flaunting and revelation, about playing to the crowd, Bahnsen not only sticks to her own tune, but she also recognizes the importance of dressing for an audience of one.

You should feel “comfortable when you put [the pieces] on, but you should also feel like your confidence grows,” she reflects. “But I feel like you’re also sometimes vulnerable and you’re emotional—I very much am when I create the collections—and you can also express these feelings in your clothes; not just be powerful but also be yourself, which I think is even more beautiful, really.”

Bahnsen offers an alternative way of designing for the female gaze, woman to woman, to that offered by the new gen of talent reclaiming what sexy can be. For Bahnsen, details exist to delight the person who wears them.

A three-layer fil coupé has a top layer that will separate from the rest and continue to bloom over time, meaning the pieces change and evolve with the wearer, rather than being bold statement pieces meant to be worn once for effect.

When the models were caught in a downpour during filming, Bahnsen was able to find the silver lining and take delight in how the volumes changed, the colors reflected in the puddles, the surfaces transformed.

Bahnsen’s ability to keep the things that are dear to her close and to make room for others is an example of generosity and openness that makes a few appearances this season.

The designer and her team were listening to Kaya’s “emotional and beautiful and honest” music as they designed the collection, she said. The film focuses on the dresses, each with its own story to reveal. If there is a plot, it’s about the celebration of craftsmanship and, as Bahnsen put it, “variations of femininity.” What a dazzling array.