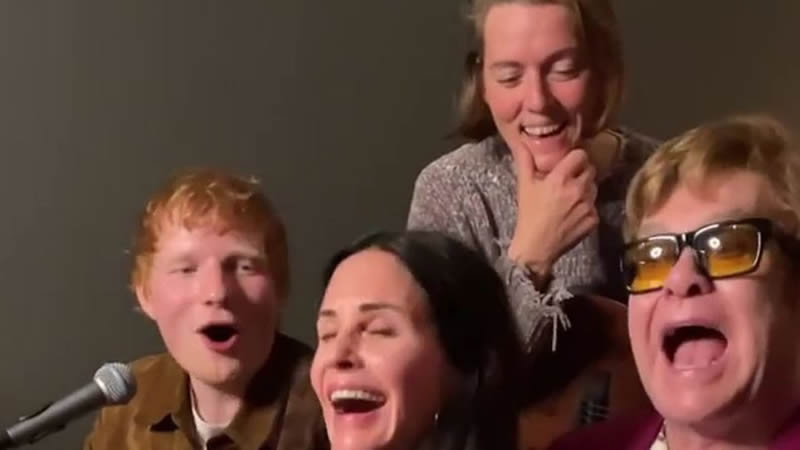 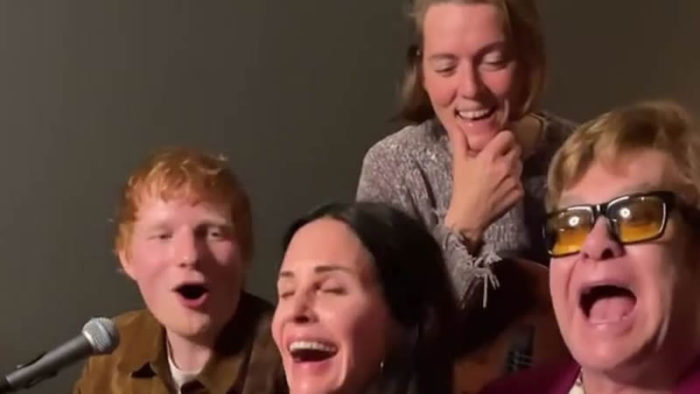 Following on from their hilarious recreation of the famous Monica and Ross dance routine from Friends, Ed Sheeran and Courteney Cox have moved it up a level.

This time, the duo have brought in the cavalry as Elton John and Brandi Carlile joined in for a rendition of Tiny Dancer.

The skit, which sees Courteney play the piano and Ed and Brandi play the guitar, was shared with the 56-year-old actress’s Instagram page on Sunday night – and once again fans were in their element.

The short video started with the Shape of You singer looking down at the camera to say: ” Lisa Kudrow this one’s for you.”

The quartet then burst into the famous song but with Lisa’s character Phoebe’s hilarious misunderstanding from the Friends episode, The One with the Princess Leia Fantasy.

In it, Phoebe incorrectly recites the lyrics to the massive hit and sings “Tony Danza” instead of “Tiny Dancer”.

She captioned the video: “One of the greatest moments of my life. This one’s for you.”

And her Friend co-star seemingly agreed as she commented: “Whaaaaaat??? That’s the most exciting thing ever!!!!”

Fans shared their appreciation too. Social media comedian Arron Crascall wrote: “You’ve won the internet for the next 3 years!!!”

Actress Arielle Vandenberg also said: “This might be the greatest moment of my life too and i wasn’t even there.”

She gushed: “OK, Ed Sheeran, Courteney Cox, Brandi Carlile, and Elton John, that was the most thrilling thing ever. It was so good.

She then broke into her own version of the song as she continued: “Technically it’s ‘Hold me close, Young Tony Danza,’ but what you did was great too. And, including the original song that you wrote, Sir Elton, that was really good too.”

And fans were also quick to take to the comment section in delight on her post too.

Actor Dan Bucatinsky commented: “OMG LISA! Love it. And of course your ‘original’.”

During the eagerly awaited Friends: The Reunion two weeks ago, Lisa performed her own duet with Lady Gaga.

The singer donned her best Phoebe Buffay outfit and put her hair up in space buns.

At the end of the performance, Lisa then brilliantly replied “I still think it’s better when it’s just me” in the style of Phoebe.

Dior to Bring Retrospective to Brooklyn Museum in September