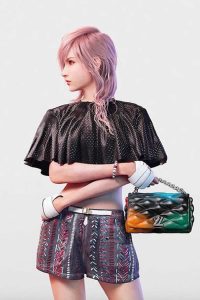 Meet Lightning. For the uninitiated, which might be a bulk of the fashion industry, she is a fictional, pink-haired character from Square Enix’s “Final Fantasy” video game series who will appear in Louis Vuitton’s spring/summer 2016 ad campaign.

Nicolas Ghesquiere, the luxury house’s creative director, unveiled the news this week on his personal Instagram account with a 15 second video of Lightning wielding Louis Vuitton purses as if they are weapons. “Reality and fantasy become one: Lightning a genuine heroine in the new @louisvuitton series 4 ad campaign,” reads the caption.

Although the pairing is surprising, it’s not completely nonsensical. Ghesquiere’s spring/summer 2016 collection for the house was inspired by Japanese anime – the show opened with a pink-haired model who looks eerily similar to Lightning.

Bella Hadid and The Weeknd Are On a Break